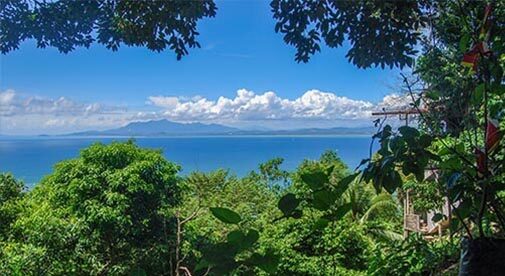 To realize their dream of living overseas, Lynn O’Brien and Kiernan Bowles assumed, as many people do, that they’d have to choose between waiting until full retirement age at 65 or leaving their jobs early and sacrificing years of additional income. They never considered that there might be a third choice, an alternative increasingly available to today’s pre-retirees: continuing their roles from abroad, on their own terms.

Before retiring to Penang, Malaysia in 2018, Lynn and Kiernan, who goes by KB, were no strangers to living in sunny, tropical climes. They met in St. Thomas and later moved to Key West, Puerto Rico, and Grand Cayman for work.

In 2008, the couple settled in Florida, where they intended to finish out their careers. During a decade in the Sunshine State, they became successful sales reps for one of the leading retirement communities in the country. Working as independent contractors, they sold hundreds of retirement homes.

Still, the dream of moving overseas was never far from their thoughts. In 2017, they went on a fact-finding mission to an IL conference in Phoenix and learned, much to their surprise, that they had saved enough to make their move happen immediately. “It was a big leap mentally for us because we didn’t think it would be possible so soon. We thought it would be quite a ways in the future,” says Lynn.

The couple enjoyed their work but were ready to start a new chapter, so they took the decision on the spot to go for it. The conference then took on a whole new dimension for them, evolving into an urgent mission to identify their perfect overseas destination and make their move happen as soon as possible.

Having explored much of the Caribbean during their professional lives, they wanted to try a more distant, exotic location while they were still young. “Then, if we needed or wanted to move closer later on, it would be easier,” says Lynn.

Initially, they favored Thailand for its rich culture, beautiful beaches, and affordability. Their eventual destination of Penang, a stunning tropical island off the west coast of peninsular Malaysia, wasn’t on their radar until they learned about the Malaysia My 2nd Home (MM2H) program, which provides a 10-year, renewable visa to foreign citizens who meet certain conditions, including demonstrating a monthly income of 10,000 Malaysian ringgit (RM) ($2,300) and depositing RM150,000 ($34,600) into a Malaysian bank account.

“We figured that even if we didn’t use the MM2H or live in Malaysia, the interest rates on the deposit are better than in the U.S.,” says KB.

Then, just as they were planning to retire and move to Penang, the sales agency they represented began offering a new partnership program that allows for remote working. Lynn and KB, it turns out, were far from alone in their desire for greater work/life flexibility, so the company rolled out the new program in a bid to retain its most experienced reps. The timing was perfect, offering them a way to continue their careers, part-time, from Penang.

“Customers reach out to us by email, and we gather information on how to serve their needs. We then pass this along to our partners so they can do the hands-on work,” says Lynn. “Referrals are a huge part of our business, so we stay active. We spent 10 years developing relationships with our buyers. Now, we continue to nurture these relationships from abroad.

“We don’t make the same kind of money we used to, but we don’t do nearly as much work, and the cost of living here in Penang is so much lower, it doesn’t matter,” she adds.

With complete control of their schedules, Lynn and KB get to do all the things they never had time for back in Florida. When they first arrived, they joined the Penang Sports Club, which boasts facilities for everything from tennis and racquetball to diving and yoga. Lynn, a keen tennis player, now enjoys weekly games with new friends she’s made at the club, while avid golfer KB plays bi-weekly rounds at different golf courses on Penang Island and the nearby mainland. In fact, the couple say they’ve never had better social lives.

“The close-knit community is one of the things we love most about our lives here,” says Lynn. “We are always out and about doing something. There is a great social scene. Music, quiz nights, theater, comedy, we do it all. We moved here on a Monday, and by Thursday it already felt like we’d been here six months.”

Looking back today, Lynn and KB, now both 63, say the oversight they made back in their full-time working days was adhering to an outmoded view of retirement.

Live where you want while having an income.

“Nowadays retirement doesn’t have to mean that you stop working completely…it’s often more of a transition. And during that transition you can find the freedom to live where you want while having an income,” says Lynn. “As we’re all learning at the moment, so much of our work can be done from anywhere. So, look at all of your options. Retirement age isn’t written in stone anymore.”

Visa and Residency in Malaysia