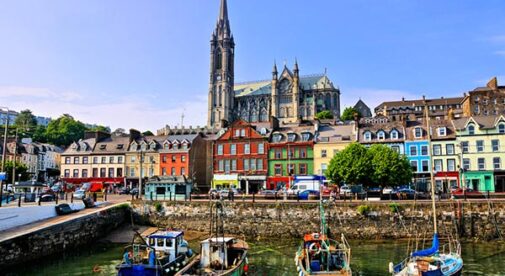 As I write from my living room here in Cork, Ireland, I look up now and again to steal a glimpse of the garden beyond the French doors.

At this time of year, it’s a menagerie of wildflowers, butterflies, rustling trees, and lush green grass. Truly idyllic.

It’s been wonderful to be on home soil for the past three weeks. After flying in from Lisbon I spent five days in quarantine before passing a PCR test and being freed from restrictions.

In the two weeks since, I’ve been busy catching up with friends and family and exploring the countryside.

In a country that spends all but a handful of weeks shrouded in heavy grey cloud, the arrival of clear blue skies is celebrated with the same kind of fervor normally reserved for great sporting victories.

Indeed, the older generation still cling to memories of summers as far gone as 1976, when temperatures rose above 90 F.

Warm sunny days in Ireland shouldn’t exist. And yet here they are, casting a magical glow on everything. The Atlantic turns a brilliant aquatic blue, the heather and gorse that adorn the hillsides burst with resplendent yellows and purples. The entire landscape, blooming with life, seems to release a huge breath of relief.

In the evenings, I get out for a few holes of golf and jump in the car to the port town of Cobh (pronounced “cove”) for an ice-cream and a stroll along the harbour, or to Ballycotton for a cliff walk.

Indoor dining is still restricted but plenty of places are now serving outside, adding to the summer buzz of tourist towns like Kinsale, just 25 minutes away.

Right now, I’m busy polishing off the report for our incredible, one-of-a-kind marina deal next week—RETA members can watch their mailbox soon.

Next, I’ll be hitting the road here and exploring the Ring of Kerry and the Beara Peninsula…

The Ring of Kerry, in Ireland’s southwest, and close to my base here, is the most scenic drive I know. It takes you through 111 miles of the County Kerry countryside, along calm bays, sandy beaches, and wild roaring Atlantic shores. Starting at the base of MacGillycuddy’s Reeks (which contain Ireland’s highest mountain) in Killarney, the route brings you around the Iveragh Peninsula, through two of Ireland’s prettiest towns—Kenmare and Sneem—and to the long sandy beaches and wild Atlantic at Waterville.

There are attractions and jaw-dropping lookout points along the way. You can take a boat to the Skellig Islands and hike to the ancient beehive monastic settlement. Here, monks were battered by wild Atlantic storms. An environment so hostile that they stayed, for centuries, safe from attack.

This was where we found some incredible deals in Ireland’s post-economic-crash era. And if you had followed some of our RETA plays at the time, you’d be doing gangbusters today.

Back then, Ireland was still in the depths of crisis…and the best crisis deals were ripe for the picking.

In Kenmare for instance, the collapse of the Irish vacation home market meant some real estate values had dropped by catastrophic proportions. Too many were built, developers went bust and their real estate was being sold off at rock bottom.

Today, these properties would sell for at least three times these prices.

What was a buyers’ market has now entirely flipped to a sellers’ market. And, just like we’re seeing in the U.S., it’s in full-on frenzy mode.

The picturesque town of Kinsale, just 25 minutes from my base, has seen best-in-class waterfront homes up about 60% since Covid formally arrived ahead of St Patrick’s Day. In an area of west Kerry where my sister vacations with her family prices have doubled.

All across scenic parts of Ireland prices are soaring. And it’s not just at the point of purchase. A friend who is currently moving back from a major city in Asia bought in Kinsale pre-Covid but postponed renovations. Now, a mere 18 months later, his renovations are going to cost him 30% more than he was originally quoted. I deferred getting new carpets in a rental property I own…a year later the same thing will cost me 17% more. Here’s the thing though, I can’t get a timeline on when installation will be possible. Everyone is too busy…

A chronic housing shortage is plaguing Ireland and it’s been years in the making. From the middle of the last crisis, it was clear that the demographic trends combined with Ireland’s economic growth and lack of capacity to build was leading to this scenario.

It’s largely a result of a draconian and bizarre permitting process. It takes years to get a project off the ground here. While lack of permitting clarity allows anyone and everyone to object to any building at any time.

Now, most folks are locked out of the market entirely. I enquired about a couple of properties I liked in the past two weeks and I was asked straight up if I was a cash buyer. The implication is that mortgage approval no longer cuts it. Like much of the U.S., it’s become a cash-only market—a first for Ireland.

At the end of next week, I’ll also be decamping to the Adare Manor in County Limerick, just north of Cork.

The Adare Manor is one of Europe’s most high-end golf and hotel communities, and where I previously lived and was a member of the golf club. And it’s the site of one of the coolest crisis opportunities we could buy in Ireland in 2014.

When I made my recommendation to you, we could lock down townhomes in this premium golf resort for €125,000 or less (about $166,250 at the time). Adare Manor was in trouble back them…but a noted investor you might have heard of (J.P. McManus) swooped in.

Now things are moving at an incredible clip at this resort. It’s been recognized as one the best hotels in the world on the Condé Nast Traveler’s 2021 Gold List. And it’s set to host the 2027 Ryder Cup, one of the biggest golf events on the world stage.

Today, the townhomes I recommended largely been bought up by the resort and rent for a whopping €1,500 and up per night.

In terms of current RETA opportunities in Ireland, pretty much forget it. We don’t want to play in a sellers’ market. Ireland is still tied to a boom-and-bust property cycle, and the boom still has a way to go.

Lucky for Ireland, the economic outlook is in better shape than it was during the years of the Celtic Tiger. It’s thriving international tech and pharmaceutical sectors provide a buffer against deficits elsewhere in the economy. But Covid has decimated retail and entertainment and the fallout remains to be seen.

The one opportunity I see that could still pay is to look for undervalued and overlooked commercial and retail spaces that could be reused for other purposes.

Due to the Covid restrictions across the country, pubs have closed…some will never reopen. The pub industry was already struggling due to changing habits and stricter laws. Social distancing has broken their business model. As for retail…many of the main streets in Ireland are decimated. There are already fire-sales of pubs and retail properties with accommodation above. Over the next few months, as the country reopens, we’ll undoubtedly see a glut of these premises come up for sale. I’ll be keeping a close eye for deals.

Some of the brightest spots for deals in Ireland have been in remote areas of the west and northwest, as well and the lake country in the midlands. If I’m seeing opportunity, I’ll be there to check it out.

Then, come September, my travel schedule returns to full swing. First stop will be to Portugal’s Algarve and from there across to explore southern Spain. Then I’ll be back on Portugal’s Silver Coast in early October for a few weeks before flying to Panama, the Riviera Maya, and to Cabo.

Meanwhile, my team are making plans to get boots on the ground elsewhere in Europe. France, Italy, Greece, and Eastern Europe. There will be a lot to unpack as we take stock of the post-Covid landscape. And undoubtedly a lot of fresh opportunities waiting to be uncovered.

We’re in for an incredible journey ahead. And we’re taking you with us every step of the way… 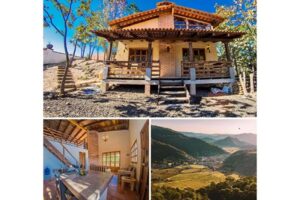 Just 10 minutes from the pueblo magico town of Navidad is today’s two-bed, three-bath home. (Pueblo magico is a special designation given by the Mexican government to small towns with unique cultural, natural, or architectural qualities.) In the 1,290 square feet of living space there’s a modern kitchen, a dining area, and a living room with a wood burning stove. There’s also a large front deck and a mezzanine level which could be used as a bedroom or another living area. ⁠⁠⁠⁠

Remember, we don’t make money from any listing shared here in the Your Daily Dream Home section. We have no dog in the fight. We’re just sharing cool properties we’ve found.

The Other Real Estate Boom