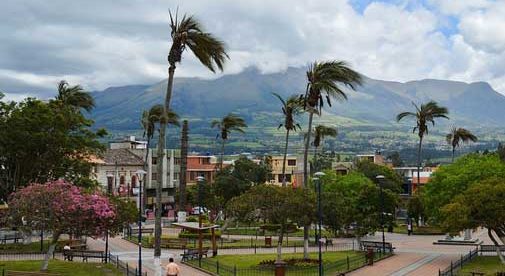 The Andes form an impressive backdrop to Cotacachi.

Many expats who are considering retiring to Ecuador look for a city or town they think they would like to live in, myself included. Many also make one or more trips to check out different locales prior to making their final move.

Ecuador is unusual in that much of the country is covered by the Andes Mountain range so that there are fewer populated areas, especially those that tend to be more attractive to expats. The two major airports in Ecuador are in Guayaquil (on the coast in central Ecuador) and Quito (the capital of Ecuador to the north). Cuenca, which is more central and inland, also has a small airport as does Loja. Planning an exploratory trip to check out the country can be interesting and fun.

I settled in Cuenca, a city of about 300,000 that sits about 8,500 feet in the Andes Mountains. It is a beautiful, thriving city enriched by numerous cultural opportunities and walking trails that align the four rivers that run through the city. After living there for a year or so I decided I wanted to try a more relaxed, slower paced environment. Cotacachi had been my second choice from the beginning, and so I decided to give it a try. This is a town of about 9,000 inhabitants that is located just north of Quito.

There are flights from Cuenca to Quito, but since I had accumulated some household goods along with my original suitcases and little dog, I decided to make the commute by hiring a highly recommended local driver who had a good sized SUV. The trip would take us directly through the Andes Mountain range on Pan American Highway 35 and last about 10 hours. It was definitely not a quick, easy route. It ended up, however, being one of the best decisions I could have made in terms of “sight-seeing” since I moved to Ecuador.

I, like many others, had no real conception of what the Andes Mountains truly represent. They are the longest mountain range on the planet stretching some 4,300 miles from the northern tip of South America to the southern end. Their highest peaks, with an average of 13,000 feet, are only second to the Himalayas in Asia.

But what makes the Andes Mountains so unique is the variety of micro climates that exist across the many peaks and valleys along the highway’s path. I have traveled a fair amount in my lifetime and been fortunate to have visited some other beautiful mountain ranges such as the Canadian Rockies, the Swiss and Bavarian Alps, and volcanic mountain peaks of Bali, and this trip offered yet another incredible sight to embrace and enjoy. The flora and fauna changed dramatically from one place to another, often times within a very short distance. From forest-like pine trees and cool temperatures at the higher elevations to more desert like shrubs, bushes, and Ceibo trees covering the lower elevations with more mild temperatures. Even the colors and composition of the mountain rocks and soil showed dramatic changes.

Then there are the quaint villages and towns that are nestled quietly in the small valleys and coves along the way. The clouds ramble along sometimes above and sometimes we would drive through them, all with something of a mystical feel.

As we got closer to Cotacachi, which is part of an area known for farming of fruits and vegetables, I started seeing shades of green in patchwork parcels of land running up the slopes of the mountainsides as if someone had thrown a quilt over them. The town itself rests in a small valley surrounded by the mountains. The peaks of Mount Imbabura and Mama Cotacachi stand at over 15,000 feet.

I reached my destination with a whole new appreciation of the country and the beautiful planet we live on. This is one time I would recommend taking the scenic route.

A Full Life Living On Social Security Of $1,000 A Month In Cotacachi

Moving To Ecuador: Should I Bring A Container Or A Suitcase?