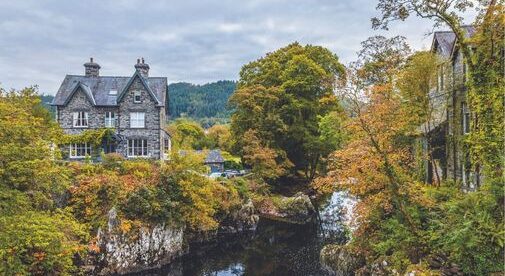 The bucolic town of Betws-y-Coed is the starting point for hikes into Snowdonia National Park. ©iStock/CHRIS2766

With a sheer 600-foot fall on my left side, and a 1,000-foot fall on my right, the blade-pointed ridge of Crib Goch wasn’t a comforting place to experience the landscapes of North Wales—but it was certainly one of the most rewarding.

“Oh yeah,” an experienced climber told me before I set out. “Crib Goch is tough. It averages about eight deaths a year.” Well, if you thought about those statistics too much, you’d never leave the house. Nevertheless, I did ask him for any tips to getting across the ridge unscathed. It was an unsettling moment. The grizzled adventurer snapped into a momentary thousand-yard stare—presumably reliving a lifetime’s worth of high-altitude close calls—then snapped back to attention. His advice to me? “Don’t fall off…”

The genteel and grizzled coexist happily.

Does that all sound far too macho and grandiose for a mountain range that doesn’t top 4,000 feet in elevation? Perhaps. But these are rugged, steep peaks, even if they’re not thin-air territory. John Hunt’s 1953 expedition to Everest—which culminated in Edmund Hilary and Tenzing Norgay’s successful summit of the virgin peak—did its technical training here in the Welsh mountains. Toughness is built-in here.

As is history. Square-mile for squaremile, Wales is home to more castles than anywhere on the planet. Most of them date from the 12th to 15th centuries, built from the dense limestone underlying this compact, beguiling land (Caernarfon and Beaumaris castles are just two that are well-preserved examples which you can visit and tour). Historically, that’s a lot of effort to defend a land that offered little to the medieval monarch beyond some meager sheep pastures, jagged mountains, and a few coastal fishing villages.

But nowadays, those are what bring North Wales its riches. Stark glaciated valleys carving between needle-pointed peaks; deep blue-green lakes nestling beneath mixed-forest ridges; imposing Norman castles rising vertically from the fringes of the sea—these are the features which draw in-the-know travelers to this underexposed corner of the United Kingdom. 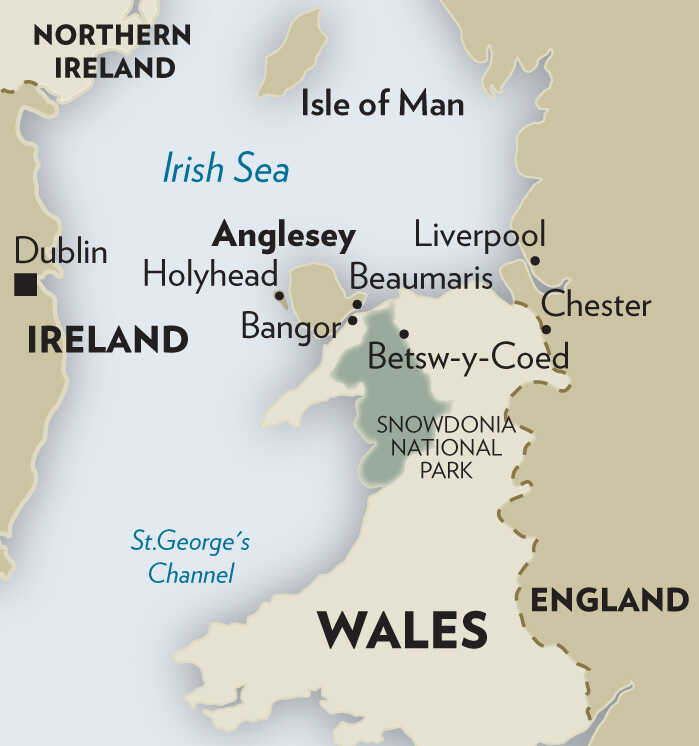 For physical drama, historic charm, and cozy aprés-hike replenishment, it matches anything in Scotland or Ireland. Where it surpasses both, for the traveler, is in scale; you can cross the whole country by train in just over an hour. Which is exactly what I did. The idea was—to quote a Beach Boys hit—to get there fast and then take things slow. Slow travel. Gentle travel. On foot, ferry, and by train. (Though I wandered around Wales on my own, there are companies that offer self-guided tours—they’ll map out your route and book your accommodation. Here are some I came across in my research: macsadventure.com/walking-holiday/ukwalking- holiday/wales, hillwalktours.com/ hiking-wales, and inntravel.co.uk/walkingholidays/ uk/wales.)

Slow travel is nothing new here. As early as the 10th century, pilgrims walked the holy trail between Saint Winifride’s Well in the east of Wales to Bardsey Island in the west—a journey of some 80 miles that mirrored much of my own.

The coast here is languid, without the large swells that you find on more exposed stretches of ocean. It’s a novelty to see oak, sycamore, and ash trees thrive so close to shore, and the seaside towns along the coast from Prestatyn to Llanfairfechan are leafier than you might expect, with wooded headlands coming right to the fawn sands of the shore.

But my first destination in Wales was Betws-y-Coed, some 15 miles inland along the Conwy River Valley. The railway line from Llandudno Junction is outrageously beautiful, tracking south alongside the river as the terrain gets abruptly steeper and more heavily forested. It starts with a tunnel which actually delves under the structure of 13thcentury Conwy Castle (stay on the coast side of the train for the best views), then chugs through numerous pretty waterside villages on its way to the slate mines of Blanau Ffestiniog. For £6.60 ($7.50) it’s a lovely ride.

Betws-y-Coed, from its Old World, cottage-style railway station to its stonebuilt Victorian-era hotels, is a cross between Tolkien’s Shire and Everest base camp. With a village green, riverside walkway, cozy pubs, and tea shops, it could be a Merchant Ivory movie set.

On the other hand, it’s wall-to-wall climbing and adventure stores, wiley mountaineers, and muddy hiking boots. Somehow, the genteel and the grizzled coexist happily. Betws-y-Coed is the preferred starting point for forays into the Snowdonia mountain range—take the S2 bus to Pen-y-Pas if you want to check out Wales’s highest summit.

I stayed at the Glan Aber hotel (see: glanaberhotel.co.uk). The decor may be a little dated, but the chatty atmosphere in the common areas and the local craft brews on tap more than made up for that.

Leaving the mountains for the coast, my next stop was the university town of Bangor. Though (and because) it’s not quite as pretty as other nearby towns, it’s a lot easier to find accommodation here. From Bangor, it’s a half-hour walk to the world’s first iron suspension bridge—an imposing and handsome structure built by Thomas Telford in 1836 over the glinting blue waters of the Menai Strait to Anglesea Island.

Once on Anglesea, it’s worth a twomile detour west along the Anglesea Coastal Path to Church Island, where a tiny chapel (reached by causeway) stands on the site of Saint Cylio’s 7th-century hermitage. The views of the Menai Bridge and mountains behind it are magnificent. And it’s on the pilgrim route, to add some historical and spiritual heft to your hike.

Eastwards from the bridge, a picturesque walk (or bus ride—take the 5C from Bangor) for some five miles brings you to the genteel seaside town of Beaumaris.

The town would already be worth a visit for a home-made pork pie lunch with a pint of cider at the George and Dragon pub (17th-century, oak-beamed ceilings and walls, see: robinsonsbrewery.com/pubs/ george-dragon-beaumaris). But there’s plenty to see, too.

The jewel of Beaumaris is its 13th-century moated castle, just on the edge of town. It costs £8.40 ($9) to enter this pinnacle of military architecture. Aside from the castle, Beaumaris is a lovely town for a stroll and a browse through its independent boutiques and stores. And the sunsets over the water are spectacular.

I stayed at The Liverpool Arms (see: liverpoolarms.co.uk), in a delightful room with a deep feather comforter and quirky stylings (ask for a room at the back, away from the main street). Established in 1706, the downstairs bar serves wonderful food (try the slow-cooked shank of Welsh lamb) and local ales on tap. Their fried breakfast, sourced from nearby producers, is a thing of beauty too. Good fuel for my final journey back to the port of Holyhead.

A TICKET TO CONSIDER

To get to Wales, I took the ferry from my home base in Ireland. I bought a Sail&Rail ticket online, direct from IrishFerries.com. In total, I paid €118 ($116) for round-trip travel between Dublin, Ireland and Chester, United Kingdom. The price included sea crossings on Irish Ferries’ fast catamaran service (around two-and-a-half hours sailing per trip).

So far, so good—it’s a bargain already. However, there’s a detail in the ticket’s small print that makes it an even better bargain. Section 6 of the ticket’s conditions of use states the following: “Break of journey is authorized, without formality, within the limits of the period of validity.” Effectively, this means that you can stop as often as you like between both endpoints of your destination and turn your journey into a sort of linear InterRail experience— but for a lot less than the price of an InterRail ticket.

Bear in mind that neither the UK nor Ireland are members of the EU Schengen Area. If you plan an extended trip to Europe, a gentle few weeks spent in either country—perhaps using the Sail&Rail option—would be a very fine way to extend or break up the standard 90-day tourist visa allocation on the European continent.

Your journey must be taken on the most direct route between locations—you can’t hop from Dublin to Edinburgh via London, for example. And the ticket price is calculated by how much ground your journey covers. (Heading for the extremes of northern Scotland will cost more than a much shorter trip to, say, Liverpool. Nevertheless, when I did some test bookings, the price difference was minimal—less than $15 in many cases.)

My chosen route was across the north coast of Wales, but a glance at a UK rail map sparks the imagination. The Victorian beach resort of Scarbrough, with stop-offs in Manchester and York? Cambridge via Derby? Brighton via London? All tempting. Grab a map and start planning!

The 12 Best Castles to Visit in Ireland

10 Best Things to Do in York, England