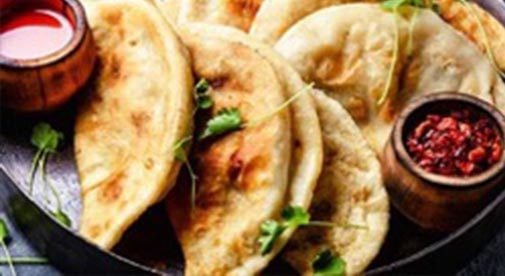 Trying new cuisines is a rewarding part of traveling. Now you can know what you’re eating. ©iStock/Nikolay Donetsk

Back at university, I studied Russian language. I might as well have studied Martian for all the good my Russian language “skills” offered when my girlfriend, Yuliya, and I stepped into a Georgian restaurant along the Crimean coast recently.

Though I can read the Cyrillic alphabet, and though I can still translate a limited number of words, I had absolutely no idea what 98% of the menu was telling me. Even the pictures did little to describe what a particular food item might really be. Is that lamb or beef…or some offal product I don’t want? And there was no way Yuliya could translate every word on the menu for me—we’d have been there all night reading instead of eating.

It’s like that in a lot of countries I visit, particularly in regions where Western tourists are an oddity, as they are in Crimea, which remains under U.S. and European Union sanctions. Outside of hotel cafés and whatever international restaurant chains might exist, English is a rarity on many menus. You’re either stuck hoping the waitstaff speaks some English and can help you find something you might like; or you rely on a local you might be traveling with, hoping you’re not taxing their patience with questions about everything on the menu; or you just gamble and point at something and hope for the best.

At least that’s the way it used to go. As I was sitting at the table looking at all those Cyrillic letters mocking me for not being a better student, I pulled out my iPhone to type a few words into the Google Translate app. It was then, for the first time, that I saw the “camera” option. Hmmm, I wondered…

I pointed the phone at the menu…and like an ancient alchemist transmuting lead into gold, those crazy Cyrillic letters immediately, right before my eyes, curved themselves into recognizable English words. Lamb with tomatoes, sweet peppers, and spices? That sounds amazing right about now, I thought.

It was, to me, almost magical. Even Yuliya, laughing at my excitement, noticed I was like a kid with a new Christmas toy.

I am an inveterate world traveler and have been since I was a kid. But languages have always escaped me. I’ve tried not only Russian, but Spanish, French, German, Chinese, and Norwegian. None of them stuck. At best, I can order a burger in Barcelona, no onions… and I can count to seven in St. Petersburg after ordering a bottle of sparkling water. Because of that, restaurants have always been a source of some stress when I travel. I really loathe the idea of popping into some cantina, not having any idea what’s on the menu, and ordering something that turns out to be, well, vile. I’d have to force it down, however unpleasant, because I believe when you’re in another country, you eat what you’re given, as a sign of respect and to not be that American.

So it is, then, that I find this Google Translate camera function so brilliant. It opens up the world because it allows you to translate everything around you, instantly, just by pointing your phone: posters, billboards, road signs, menus, local transit schedules, whatever. Essentially, it lets you access options you would have likely missed before. For me, it means I can now wander into any hole-in-the-wall eatery that catches my fancy and find something I’ll like.

Better yet, it works without an internet connection. And that’s a real plus in some places.

For instance, because of sanctions in Crimea, neither of my iPhones (one Irish, one Czech) worked. So, away from my hotel, the internet was simply not an option. I had no mobile connection for cellular access, and even where I found free WiFi in restaurants and coffee houses, the necessary access code needed to be sent by SMS…which is impossible to receive when there’s no mobile service.

But with the right planning, you can easily navigate your way through any foreign language now.

And the planning is quite simple: Just download the language onto your phone.

When I was at my hotel, I opened my Google Translate app and downloaded Russian so that the app would be able to translate for me when I was offline, away from any internet service. That’s it. That’s all the planning needed.

As I moved around Crimea with Yuliya, I relied on her less and less for menu translations, and I found items I wanted that I wouldn’t have thought to tell her to look for—such as a raspberry mint tea at a pastry shop in Sevastopol.

To be sure, nothing’s perfect. Words sometimes translate incorrectly. And as you move the camera around, words jumble and change meaning, so you’re not always 100% certain what you’re ordering. But, honestly, that’s like saying the free glass of water is a tad too warm after you’ve been lost in the desert for a week.

For anyone who travels globally and doesn’t speak the language wherever you happen to alight, this strategy of downloading the local language into your Google Translate app, and then using the camera to read everything in English—particularly menus—is a game-changer.

The Empowering Effects of Learning a New Language