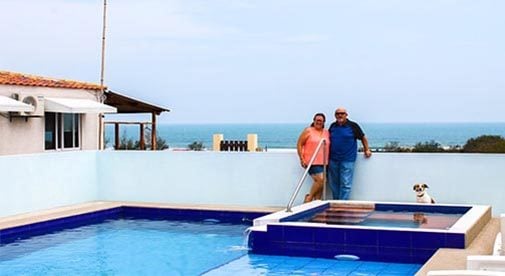 “Anybody can do it,” Bonnie Gelley says, gesturing with an outstretched arm toward the expanse of Pacific Ocean that forms the view from her home in Puerto Cayo, Ecuador. A wide, gently curved bay fills the view from the panoramic windows, with tropical vegetation sweeping to the beach in the foreground, and small sandstone islets visible to the south. In the migration season around August, Bonnie and her husband, Mark, can whale-watch from their living room, as humpbacks make their way northwards.

Mark, 62, and Bonnie, 60, recently filled their outdoor pool and Jacuzzi for the first time, and although there are still a few small touches to be made to the paving and planting, it’s already a luxurious place to lounge away an afternoon in the Ecuadorian sunshine.

The couple had been living in North Carolina in the years before their move to Ecuador. Mark worked as a project manager with Volvo trucks, and Bonnie had a role as data manager with local schools. Neither of them was particularly unhappy with the life they were living, but as they approached their 60s, retirement was something they both thought about a lot.

“We both felt we wanted to retire early. But in the States, retiring ‘early’ meant retiring at 70. That’s about as early as we could have managed it there. It’s just so expensive to live in the U.S. now. So we looked elsewhere.”

Puerto Cayo, in the Manabí province of the country, checked all the boxes. “It reminds me of how the beach was in Delaware 50 years ago,” says Bonnie. A stroll around the town center or the nearby beachfront promenade reinforces the feeling of unhurried calm that she’s referring to. Schoolkids play soccer in the market square, fishermen mend their nets in the shade of palm trees, and the thatched fish restaurants on the sands serve up freshly grilled fillets of tuna for $4 a plate.

It’s a brightly painted, slow-paced nook that benefits wonderfully from being set slightly apart from the main north-south highway along Ecuador’s coast. The distance isn’t huge, it’s only about a mile from the town plaza to the main road, but it means that traffic heading between the major cities of Manta and Salinas doesn’t interrupt the gentle calm of Puerto Cayo.

The Gelleys reckon on there being almost 50 expat residents in the area, and they’re an active bunch, organizing plenty of social meetups including weekly trivia nights on Thursdays and Sunday brunches. Bonnie is also keen to point out how lovely the locals have been since they moved to Puerto Cayo. “When we came here first, people brought us food. Produce and fish, that sort of thing. I don’t even know how they feed themselves—in the U.S. they’d be considered as poor—but they’re so hospitable and friendly. We didn’t know Spanish when we moved, but we’re learning now. It’s not a necessity, but it’s a plus. It’s nice to be able to speak with such lovely people in their own language, even if learning it is difficult. I’ll admit, I find it frustrating,” says Bonnie.

But that’s a minor downside when everything else is so easy. Mark and Bonnie’s three-bedroom, two-bathroom house, and the land they built it on, and the new pool and garden, cost them just $105,000. They share it with their three dogs, Lucy and Stella, who came to them in Ecuador, and Floyd, who flew with them from the U.S.

“The bureaucracy of it all wasn’t difficult, really,” says Mark. “You just have to factor in the expense when you budget for your move. Buying the house was simple, we gave power of attorney to a lawyer in Quito. He did all the paperwork; we transferred the money. Done! We took a similar approach with visas. Gathering all the documentation we needed was a lot of legwork, but most of that’s done in the U.S. It cost less than $2,000 for both of us to get our residence visas. That’s a pretty reasonable moving expense.”

It’s paid off for them too, in numerous ways. Healthier, outdoor living is priceless, but excellent health insurance for $245 a month is a tangible savings (and that’s the price for both of them). Their experiences with the local system have been good; Mark paid just $180 for an MRI scan, and received the results on the same day. A monthly prescription that used to cost Bonnie a $25 copay in the U.S. costs just $3.50 in Ecuador.

I’ve lost 25 pounds without even trying.

Overall, though, the Gelleys have found that their stress-free lifestyle and unprocessed diet in Puerto Cayo are keeping them fit and healthy well beyond expectations. “I lost 25 pounds in a year, without even trying,” says Mark, reflecting an observation that’s been voiced by many expats in Ecuador. Puerto Cayo’s bright sunshine, lush vegetation, and small-town languor clearly suits the Gelleys, and as Bonnie is keen to point out…anybody can do it.