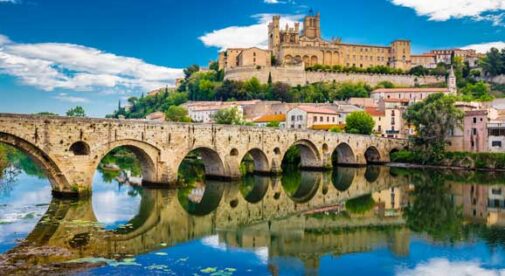 I knew nothing about Occitanie when I moved to France. It just happened to be the location of an apartment I could afford on a limited income. Nine years on, still living happily in the same small village, I’ve discovered that Occitanie has all the features that draw hordes of visitors to Provence, but it’s less discovered, less touristy, and less expensive.

The region’s affordability, low crime rate, and excellent air quality are just some of the qualities that make it one of the most liveable and desirable parts of France. I have my own reasons, I’ve listed 10 of them here… and I could easily come back with 10 more.

Living here is truly affordable—even on little more than a Social Security pension. My partner and I pay $760 a month (including electricity and water) for our two-bedroom apartment with a garden that, thanks to the mild climate, we enjoy year-round. Rents farther inland tend to be less.

We spend between $325 and $380 a month on groceries, mostly from weekly farmers’ markets and discount food chains.

Lunch out costs around $15 for a plat du jour (dish of the day). And finally, as we toast our good life with glasses of excellent local wine, there’s the added satisfaction of knowing that the bottle cost less than $4.

The south of France says sunshine, and Occitanie has around 300 days a year, only slightly less than Provence.

Located between the Pyrenees and the Mediterranean, the region enjoys a typically Mediterranean climate with hot, dry summers, cool winters, and moderate springs and autumns.

Occitanie’s soft sandy beaches run from the eastern Pyrenees to the Rhône delta, a 136-mile stretch of coastline.

Within a half-hour drive of home, I can take my pick of several beaches, each with its own distinctive feel—including a nudist beach which I haven’t tried.

Most of the beaches are close to restaurants and casual shops, a few are open year-round. In summer, for about $27, you can rent a sun-lounger and umbrella, and enjoy a beverage and light lunch brought to your chair-side table. It’s not a bad way to spend the day.

One of three national parks in Occitanie and listed as a UNESCO World Biosphere Reserve, Cevennes is an outdoor paradise of limestone cliffs, volcanic plateaus, and scrub-covered plains intersected with rivers and streams.

Forget the word “park” and think of a massive geographic area that covers parts of four different departments. Whether you’re looking for dramatic scenery, hiking, canoeing, or quaint French villages that seem frozen in time, Cevennes has it all, including a local specialty: Pélardon, a delicious, soft, goat’s cheese.

Speaking of food—Occitanie is a foodie paradise. I like to show off the numerous outdoor markets to visitors. It’s fun watch their reactions to stall after stall of local produce, regional cheeses, shimmering olives, tubs of tapenades, ropes of saucisson sec (dry cured sausages), artisan breads of all shapes and sizes, fresh seafood, and buckets brimming with colorful flowers.

Having fired up our appetites, it’s off to sample some Occitanie cuisine: Cassoulet—a Toulouse specialty of beans and sausages, or Tielle, an octopus and tomato pie from the fishing port of  Sète.

After driving for miles and seeing nothing but vineyards, you won’t be surprised to learn that Occitanie is France’s largest wine region. But what might surprise you is that many vineyards are small family-owned affairs.

With a few vigneron (winemaking) neighbors, I’ve developed a great appreciation for the work and artistry involved in making wine. While this area is less geared to tourists, many domaines (vineyards) do have roadside signs offering degustations (tastings)—drop in for a glass and, maybe a chat, with the winemaker.

Nestled in the dramatic Herault Gorge, and a stop on the pilgrim route to Santiago de Compostella, this hilltop village is listed as the one of the most beautiful in France.

At the top of the hill is The Abbey of Gellone, a UNESCO World Heritage Site. Enjoy a drink at one of the outdoor cafés and shelter from the sun beneath a 180-year-old plane tree.

Fancy a lazy houseboat cruise? You can rent a barge or houseboat on the 17th century Canal du Midi, a 149-mile network of waterways that flow from Occitanie’s capital, Toulouse, to the Thau Lagoon near Sète.

Spend a weekend or more, sip a glass of wine, and watch the French countryside slowly drift past. Or simply take a stroll or ride a bike along the canal’s leafy banks.

Considered an extraordinary feat of engineering, the UNESCO listed Canal du Midi was designed by Beziers native Paul Riquet. His statue presides over Allées Paul Riquet, a tree-lined boulevard of restaurants, shops, and outdoor markets. From the city’s center, it’s a pleasant walk to the canal where you can watch barges pass through the staircase of locks—Les 9 EclusesDe Fonseranes—which Riquet also designed.

What would a region be without gruesome history? Take Occitanie’s Pays Cathare, Cathar Country, for instance. A collection of 12th and 13th century castles, churches, and ruins once belonging to a religious sect which dared oppose the Catholic Church—until Pope Innocent III decided he’d had enough and launched a crusade to eradicate them.

He started in Beziers where crusaders slaughtered the city’s entire population, around 15,000, then burned the place to the ground. Over the next 20 years, Cathar strongholds were rampaged until the sect was eventually considered wiped out.

A 7-Day Itinerary for Alluring Occitanie, the Other South of France

5 Things to do in France’s Occitanie Region