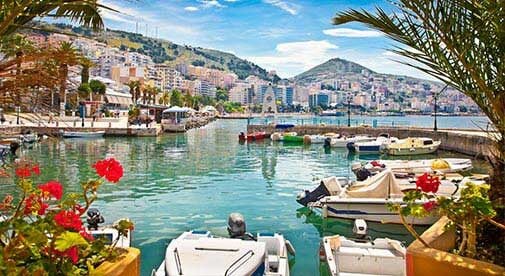 I retired on February 14, 2020. I planned to fly to Colombia for a 90-day visit to see if I really wanted to move there. My plane ticket was for March 19, I never made it. After a few months, it became obvious this pandemic had changed the way we travel and where and how we could relocate to another country.

Weeks became months and as time marched on I started to think about other places I wanted to see. I wanted a place that had open spaces, few people, lots of sunshine, and an active expat community. The Balkan States had always interested me so I started looking at countries along the beautiful Adriatic Sea. Affordability was a key consideration and for me there was one country that stood out amongst the others. Albania.

For years this small country was closed to the world. From the end of WW2 until the early 1990s a communist dictator controlled everything. Very little was known about this wonderful country and its history for a long time. A person can move to the capital, Tirana and live reasonably cheaply and still enjoy all the trappings of a “modern” lifestyle. Or you could pick a village in a high mountain valley and only speak English to the few tourists that happen by.

There is something for everyone in Albania—beaches, mountains, fertile valleys, and bustling regional cities with some surprising features, attractions, and history.

Here are just a few reasons to live in Albania:

Getting to and into Albania is straight forward. Several major Airlines serve the capital with one connection at their “hub”. I came through Belgrade with no difficulty, others have used Istanbul, Frankfurt and up until just recently London. The best part for those carrying a U.S. passport is you have one year stay upon entry. For me this was the deciding factor and I am glad I came here instead of a country that had a 90-day tourist visa. It just took all the pressure off having to make any decisions too quickly. They use a saying here,“Avash, Avash” meaning slowly slowly…take things one step at a time. With the pandemic a huge issue it’s impossible to say what conditions will be like or if requirements will change. Each person must do their own research and decide what is best for them. Both the American Embassy and the Albanian Embassy are the best places for current information.

Recently, I had a fantastic dinner and a nice bottle of Italian wine for about $18. The rate of exchange is comparatively low at 1 USD to 102 ALL. Rent along with most groceries are also very affordable. A one-bedroom apartment in Sarande in the off-season can be a cheap as $300 plus utilities (about $80 to $100 depending on internet speeds). As with any place if you want items not produced or supplied locally you can expect to pay a premium.

The People of Albania

The bonus in Albania is the people. They are friendly and very interested in those who visit their country. I have found this true everywhere, especially in the outlying areas like small villages and areas where agriculture is the mainstay for most people. If you show even a small effort in communicating in “Shqip” (Albanian language), soon they will be inviting you in for a meal you will never forget. I found myself amazed at the hospitality extended to me by almost every person I have met. They want to know where you are from, why you came to Albania, and if they can help you in some way. They do stare at strangers a bit; don’t be offended, it’s just innocent curiosity. I have made several friends here that I will want to keep in touch with.

Reading a plaque at one of the big archeological sites (Butrint) I was awe stuck to see names like Julius Caesar, Cleopatra, and Alexander the Great. This land bridge and seaway between the East and West has long been a place where explorers and conquerors have spent time. Mosques, churches, monasteries, castles, ruins, and other points of interest are everywhere. And until recently because of the Communist regime, many of them are relatively unknown.  There is a full year of just exploring all the historic attractions in Albania. A good 4-wheel drive is recommended to get to many of the more isolated areas, sometimes it’s more of a cow path, with cows and sheep present, you are on instead of a road!

The beaches here are legendary. The affordable accommodations, resort atmosphere, and beautiful Adriatic waters draw Europeans from as far away as Sweden. I live in Sarande and the coastline is dotted with upscale resorts as well as remote beaches only reachable by 4X4. The water is crystal clear and the climate is classic Mediterranean, meaning it’s warm, dry, and breezy. Not a lot of bugs, lots of beach bars, and miles of secluded rocky shoreline to explore on foot or by boat. Even as late as December the water is comfortable, especially to any North Americans who are used to the Atlantic, Great Lakes, or other colder climate bodies of water.

Yet another surprise are the mountains in Albania. From steep rocky slopes overlooking the Sea to high alpine, tree-covered, mountain forests. This country is blessed with beautiful and not very well-traveled areas that hold a special natural beauty all their own. I traveled up to Theth this past fall and loved the small albeit touristy mountain valley that in coming years will see a lot of growth in popularity. They are soon to complete an improved roadway into and out of that valley and that will mean bigger vehicles (tour busses). Hurry to catch the last of this place as a remote destination.