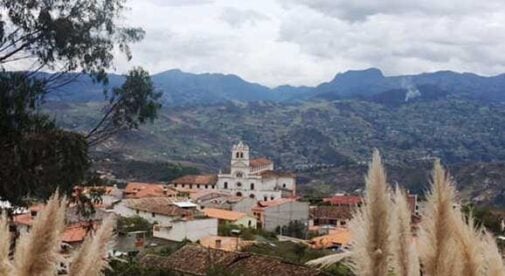 San Bartolome is a small artisanal village along the Guitar Route.

I’ve never been the creative type—I can’t draw or paint to save my life (a three-year-old could literally do better); I have no idea how to sew or knit, despite my mother being highly proficient in both; and I genuinely have no interest in learning how to make anything myself (I’d rather just pay someone to do it). But despite this complete uselessness when it comes to being creative, I’ve managed to develop a huge appreciation for people who can fashion amazing things with their hands. I can’t imagine the amount of patience and attention to detail that is required to make something intricate and beautiful. So when the opportunity arose to check out some artisan guitar makers just east of Cuenca, I was intrigued.

My husband Ken and I had moved to Cuenca in 2019 and had heard much about the artisan culture in and around the city. Like many expats, we settled into our new lives pretty quickly, making friends and adopting routines, such that we almost lost sight of one of the reasons we’d relocated—to immerse ourselves in a rich culture full of unique traditions. We decided to make more of an effort to seek out new experiences and learn more about the culture we’d moved to. So when we heard about the Ruta de las Guitarras (Guitar Route), it seemed like the perfect opportunity to get out and explore. Ken was also rather excited about the idea of buying a hand-crafted guitar, despite the fact that neither of us has ever managed to string together more than three harmonious chords between us.

The Guitar Route and Renowned Villages Around Cuenca

The Ruta de las Guitarras lies about 22 miles to the east of Cuenca, just outside the small village of San Bartolomé. Along a short stretch of road winding through some photogenic countryside, a handful of family-owned workshops are clustered together, where visitors can learn about the guitar-making process and see the end product of a highly-skilled craft that has been passed down through the generations. After an inauspicious start out of Cuenca, during which we found ourselves stuck behind an aromatic garbage truck for at least 9 miles, we emerged onto the Via a San Bartolomé and into the verdant, mountainous landscape that is a feature of much of the province of Azuay. The views were spectacular, stretching all the way to the Cajas mountains in the west and the lush slopes of Azuay province to the east. After about 40 minutes or so of very winding, potholed, steep mountain road, we arrived at our first taller (workshop), owned by the renowned Uyaguari family.

José Homero Uyaguari, 64 years old, is the owner of Guitarras Uyaguari and has passed down the tradition of guitar making—which he himself learned from his father—to three of his ten children. One of these—Santiago—was eager to show us the intricate process involved in decorating the guitars with beautifully colored inlays comprised of thousands of tiny pieces of dyed pumamaqui wood. Just completing the decorative rosette around the sound hole typically takes eight hours of painstaking work, in which Santiago clearly took immense pride. Everything is done with hand tools, and even some of the hand tools are made by hand. It was hard to comprehend the degree of patience and skill required to make these instruments, which ranged from classical guitars to ukuleles, mandolins, requintos (a smaller, higher-pitched guitar) and charangos (an Andean lute).

During the tour I noticed with alarm that Ken had picked up a very expensive-looking guitar and was lovingly caressing it, with a look in his eye that meant we would undoubtedly be making a trip to an ATM within the near future. Don José had a couple dozen finished guitars on display in his shop, each unique for the types of wood they used and the decorations on the front. Almost every wood used in the construction of the guitars is sourced from Ecuador, often from the Amazon region, with the exception of the front parts, which are made from imported Canadian pine. This variety of hardwoods really gave each instrument a unique sound and individuality, which you would never see in a factory-made guitar. Before long I had also fallen in love with the most expensive guitar in the shop, but knowing there were more workshops to visit, we held off for the moment and continued on our way (but not before Don José had helpfully told us that there were ATMs in the nearby town of Sigsig!).

There are about half a dozen different workshops along the Ruta de las Guitarras, and we visited several of these, trying out various guitars and chatting to the owners about life as a guitar maker. It is not a lucrative trade, and we learned that mass-production commercial guitar manufacturing is making it very difficult to scratch out a living as an artisan. Gabriel Coyago, owner of Guitarras Coyago, explained that although he had passed down the skill to his sons, they had not been successful in sustaining their own viable businesses because they just couldn’t compete with cheap, factory-made guitars from overseas. Pondering this, and the implication for other artisanal enterprises in general, we drove down to the small town of Sigsig, known for its straw-hat making (apparently these hats are exported to many countries around the world). Along the roadside we spotted hundreds of piles of straw being bleached in the sun outside small family-owned businesses—in preparation for being woven into hats and baskets.

Sigsig is a pleasant little town, with an impressive Salesian church dominating the central park, and—importantly—several banks with ATMs. We were famished by this point and stumbled upon the Pacha Mama restaurant, where we were pleasantly surprised to discover artisanal beer on draft and an extensive menu of tasty local food. Better still, you could sample a flight of beer for free, which made Ken extremely happy. After a huge meal of chicken stew, rice, lentils, and of course beer, we settled the hefty bill of US$5 and made a quick trip to the bank, certain by now that the beautiful guitar we had admired back at Guitarras Uyaguari was the one for us. Sigsig has several other smaller restaurants and the mercado municipal is also a good place to find some cheap, local cuisine. But we had a guitar to buy…

Jose Uyaguari was very pleased to see us returning later that day with cash in hand. We were also happy to be able to help support his business, which has been in the family for more than 100 years. And we now have a beautiful memento of our time here in Ecuador—something we will treasure for life. As a point of reference, this intricately designed and immaculately hand-crafted instrument cost us just $450—probably a tenth of what it would cost for something comparable in the States.

We decided to return to Cuenca through the towns of Chordeleg and Gualaceo, making a nice long loop and giving us the chance to see some more artisanal culture. Chordeleg is also a straw-hat-making stronghold, but is more famous for its silver jewelry, which attracts many weekend day trippers from Cuenca. It is an attractive colonial town with a pretty central plaza and many decent dining options. On the way out of town we noticed a chalet-style building which seemed a little out of place, and were surprised to discover the Café Alemán—a German-inspired café and restaurant, serving up delicious cakes and hot drinks, as well as German sausages and schnitzel.

With daylight running out, we finished our artisan-inspired day with a quick stop in the larger town of Gualaceo—known as the Jardin del Azuay (the Garden of Azuay) for its pretty natural surroundings, and famous for its handcrafted textiles known as macanas. This artisan town really needs an entire day for exploring, and many local families offer tourists the chance to observe and learn about the weaving process at their homes. The Santa Barbara River also passes through the town and is a lovely place to have a picnic and walk along the river trail. Gualaceo also has many artisans who make hand-carved wooden products such as spoons and bowls, and who work with paja toquilla, the material used in the straw hat-making business.

Heading out of town back towards Cuenca, we passed many asaderos (restaurants that serve a variety of roasted meats), where both guinea pigs and regular pigs were being cooked on spits over smoking coals. The former, i.e. furry variety, is a popular delicacy of the Azuay region, and certainly tasty, though a little difficult to justify if, as I did, you’ve ever had one as a pet. We gave them a miss on this occasion, and finally arrived home tired, but feeling inspired that the artisan culture is still alive and well—at least for the time being—in this region of southern Ecuador.

Ruta de las Guitarras—How to Get There:We used our own vehicle, which certainly provides the most freedom in being able to stop wherever and whenever you want.

Public transport does go to all the villages mentioned above, leaving from the Terminal Terrestre (central bus station) in Cuenca. You could easily be dropped off at any of the guitar-making workshops by taking any bus marked “San Bartolomé,” but it could be a little time-consuming if you want to hop from one shop to another.

A good option would be to hire a local guide/driver—typically companies charge about $55 per person for a guided tour, transport, and lunch.

You could also just hire a driver from Cuenca to take you wherever you wish to go, and this would typically cost between $70 to $90 for an eight-hour trip.

All these towns have restaurants and hotels/hostels. Sigsig is the smallest and therefore has the smallest selection, though we highly recommend the Pacha Mama restaurant there for good beer and a hearty, yet inexpensive, meal. All towns also have a mercado (market) where plenty of cheap, local food can be sourced.

Gualaceo, being the largest of the three, has more to offer in terms of accommodation, including several resort-style hotels.

And Cuenca of course has hundreds of high-quality restaurants and hotels, if you choose to just make a daytrip out of the tour.