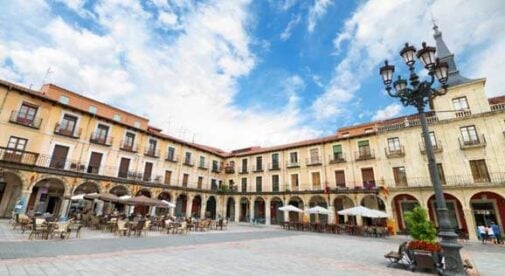 Having lived in León for almost two years now, I’ve come to appreciate the provincial capital on its own terms, parameters that include the best aspects of Spanish culture and the quality of life of a medium-sized university town. Few expats have discovered this gem, making it one of Spain’s best-kept secrets. Here are five reasons I’m glad I found my way here…

Cheap and expensive are relative terms, but my husband and I have found León to be on the cheap side. Our first home here, a furnished apartment in the heart of the historic quarter, cost us $730 a month. Simple pleasures, like a glass of wine at a restaurant patio in the Plaza Mayor, are also less than less than $3.

Coming from a stint of living in Madrid, we were also pleasantly surprised when a dinner of seafood and homemade desserts totaled only about $30 for us both.

The city was founded by the Romans as an outpost of the Roman Legion to control the nearby gold mines (a whole story of its own). A thousand years later, it became the capital of the Old Kingdom, the Visigoth holdouts that had hunkered down in the Cantabrian mountains and then launched the Reconquista. As they regained ground, they moved their capital south to León and endowed it with a giant Gothic cathedral and a pantheon to bury the royal family.

They didn’t skimp on materials or design, either. The cathedral is considered second only to that of Chartres in its stunning use of stained glass, and the Real Colegiata de San Isidoro has been nicknamed the Sistine Chapel of Romanesque art for its frescoed ceiling. The neighborhoods of these churches have also maintained much of their antique charm.

Subsequent epochs also left their mark on León. The most stunning Renaissance building in the city is the Convent of St. Mark. A hospice run by the knights of the Order of Santiago, it was expanded in the 16th century to its present grandeur.

As the city expanded in the 20th century, the architect Manuel de Cárdenas Pastor turned the newest parts of León into a mosaic of eclectic styles. Gaudí, too, graced León. The Casa Botines is one of only three buildings outside of Catalonia designed by the architect.

Yes, León actually has bike paths, making it one Spain’s few cities with such a luxury. It’s also flat, so a biking commute around town and even out to the villages just beyond the city is easy. By I have found that getting around on foot is equally possible. With a few exceptions, the neighborhoods are well connected and each one has basic services. I’m able to do most errands on foot. If it’s too far, I can catch the bus. Bus and train service with regular schedules even extend to the surrounding villages.

Right outside the city start the foothills of the Picos de Europa mountain range, the namesake of one of Spain’s most beautiful national parks.

The Picos de Europa themselves are less than an hour by car from León, but we’ve found you don’t have to go that far to be immersed in lovely natural surroundings. The urban bicycle lanes extend into a bike path that follows the River Torío north of the city. Cycling this route makes for a lovely Saturday afternoon. The hills around it are also traced with hiking trails, some of which you can follow for days through the villages that lead to the Picos de Europa. My husband, a fisherman, also has thousands of kilometers of trout rivers to play in.

León is full of cute cafés. There are, of course, also plenty of the classic Spanish bar-café set-ups, but every other street corner seems to have a more modern version with free WiFi. One of my favorites is Sonríe y Café. The shabby chic décor and complementary carrot bread served with the coffee have proven the perfect muse for writing or planning my English classes.

There is also the genuinely chic Victoria café just a few blocks from the Cathedral where I hide out on one of the couches on the upper floor…or the hip Converso with its delicious, super-cheap breakfast. I have a favorite in every neighborhood.

In León, besides the typical small beer called a caña, you can order a truly mini beer called a corto. But no matter what you order, every drink in every café or bar, whether classic or modern, comes with a complimentary pincho (small snack), more generous than anywhere else in Spain. It’s not a rare evening that my husband and I take a short walk around the medieval old city and stop for a glass of wine before heading home for dinner. It always makes me glad destiny led me back to León.