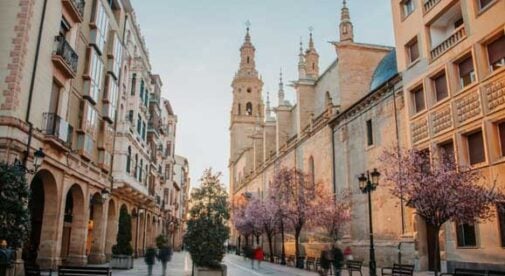 Spain has many wine regions, but La Rioja, with Logroño at its heart, is the most revered. ©iStock/MarioGuti

When we imagine Spain, many of us conjure up similar mental pictures. There’s the mouth-watering appetizers known as tapas, steaming skillets of seafood paella, and frosty pitchers of fruit-filled sangria. The ruffled skirts, clicking castanets, and staccato steps of flamenco dancing. Bullfighting.

Certain cities come to mind, as well: Madrid, with its magnificent Prado Museum; Barcelona, known for the works of Gaudí; Sevilla, in Andalusia, the birthplace of flamenco; and the Costa del Sol’s chic city of Marbella.

But there’s much more to this bountiful European gem, including these three off-the-radar places you’ll want to check out.

Located in Basque Country in northeastern Spain, the revered wine-growing region of La Rioja is recognized as the birthplace of the Spanish language. Its financial and shopping capital is Logroño, about 200 miles from Madrid. On a road trip? If you happen to have stopped by Pamplona to run with the bulls, head south-southwest one hour and you’ll arrive in Logroño. Or fly from Madrid on Iberia Airlines to Logroño-Agoncillo airport for between $110 and $220 round trip.

This is a city that knows how to capitalize on what it has: splendid plazas, leafy tree-lined avenues, and narrow cobblestone streets full of tapas bars. Fifty of them, in fact, in one four-block zone. Verdant parks—especially Parque del Ebro, on the river of the same name that borders the city—are perfect for biking and relaxing. Churches, museums, and plenty of underground parking all make this a fascinating, easy-to-visit city.

The nerve center of Logroño is Plaza del Mercado. Its majestic 12thcentury co-cathedral of Santa Maria de la Redonda oversees the frequent festivals and concerts that take place in the square. (The ecclesiastical administration of the is region is shared between Logroño and Calahorra—each city has a co-cathedral.)

Just a five-minute walk from the plaza is Calle del Laurel, where bustling taperías offer their particular specialty: prawns, quail eggs, mushrooms, and pig cheeks among them. These are served bite-sized (pincho, or pintxo in Basque) or media ración—a number of goodies on a small plate. The atmosphere there is party-like, with people standing in the street, roving from bar to bar to sample various delicacies, all washed down with Estrella Damm beer and Rioja wines.

Perhaps you prefer to sit while dining. Head to Café Moderno on Calle Francisco Martinez Zaporta. Vintage black-and-white photos, antique espresso machines, and a brasserie décor combine to transport patrons back in time. While it’s not fine dining, the food is tasty, and delivered by a friendly if hurried waitstaff who will take time to recommend local wines. A meal for two of appetizers (cheese, bread, and olives), main courses of fresh fish, pechuga de pollo (chicken fillet), salad, rice, and French fries, a lovely bottle of local wine, desserts (try the cheesecake and crème brulée), and coffee will set you back $65. Final plus: any time you’re surrounded by locals in an eatery, it’s usually a good sign. It certainly is here.

Speaking of food and wine—which as you may have noticed, is what Logroño is all about—outside the city, the impressive Bodegas Campo Viejo winery offers tours where you can taste wines paired with cheeses and charcuterie.

Opt to stay at a bed and breakfast outside the city. Hotel Rural Las Águedas— owned and operated by the gracious Señora Rocío—is a charmingly appointed 18th-century house filled with lush dark woods and antique furniture. Planted in the tiny, tree-studded village square of Ventosa, it’s the ideal counterpoint to its lively neighbor 15 minutes away.

Head south-southeast from Logroño toward Barcelona and you’ll pass through the important regional city of Zaragoza. But take an hour side trip to the west along the way and you’ll get a taste of Spain as the Spanish know it. Calatayud is located by the Carretera Nacional N-11 highway, the Autovia A-2, and the N-234. You’ll know you’re close when you spy the castle on a nearby hilltop, a reminder of the Arabic history of the city. In fact, “Ayyub’s Castle” is the travel derivation of the name Catalayud.

Centuries before the Islamic occupation of Spain in 711 A.D., the Romans were there. So, one stop to make is definitely Augusta Bilbilis, to view the remnants of an ancient forum, theater, and baths. Once you’ve got the lay of the land, head to El Museu de Calatayud on Plaza de Santa Teresa to see artifacts mined from those ruins. Follow up with a visit to Colegiato del Santo Sepulcro in town, which will bring you closer to the present day. (Well, at least to the 17th century.)

Here’s a tip when booking a room online: photos can lie. Big time. Read as many reviews as possible when you search and then assume a number may have been written by the proprietor’s nephew, grandmother, or pet beagle.

I share this because what appeared to be a sweet spot to spend the night in Calatayud for a mere $40 turned out to be a hostel. While some may appreciate the savings afforded by this type of lodging, I prefer more private surroundings. What to do in such a situation? Move on to the next town? Maybe. Or maybe you drive around a bit, park and stroll, and ask a local. Then you may hear about Mesón de la Dolores, housed in a 600-year-old structure with, of all things, a wishing well indoors near the bar.

Dine at the hotel and order the lamb dish known as Ternasco de Aragón ($19), accompanied by a local wine of—aptly— Aragón designation. Then climb the hotel’s broad wooden staircase, carved by centuries of footsteps. Enter your room, filled with antique chests and tables. Peer out on the narrow cobblestone streets below, close the heavy wooden windows, draw the lace curtains over them, and dream about the romance of the past.

If you’ve never experienced Antoni Gaudí’s surreal Casa Batlló in Barcelona (the outside of which looks like a poster for a Mexican Day of the Dead festival), you may want to check that off your Spanish shopping list. But don’t underestimate the charm of smaller cities and towns in Catalonia.

For instance, about 17 miles northeast of Barcelona, with a population of around 60,000, Granollers is a refreshing change from the electric energy of Spain’s second-largest city. Despite its evolution into a business center, the city maintains a flavor of its past prominence in agricultural and textile industries.

A must-see is the small but engaging La Porxada, a 16th-century, Renaissance-style covered corn market in the historic center of town. Bombed during the Spanish Civil War by the Italian air force, it was restored and is once again the site of weekly street markets and concerts.

While there, check out the pedra encantada, or enchanted stone. Legend has it that individuals would be tied to it and tossed into the nearby Congost River. If they floated, they were of the devil, and so executed. If they drowned, it was because they were witches. Talk about a losing proposition.

Stroll the Ruta Modernista to admire classic Catalan-style buildings and then head to Hotel Fonda Europa on Calle Agusti Vinyamata. If you’re in luck you may find Francisco at work, who can serve you two glasses of wine, olives, bruschetta, veggies, a plate including creamy Bleu, classic Spanish Manchego, and savory Mallorcan Maó (or Mahó) cheeses, along with a slice of apple cake and a handful of cookies, all for $35.

If the beach is calling you, head south-southeast on C60 a half hour to Materó and spend the day on Playa del Callao. When you tire of the great outdoors, opt for the small indoors. Cubick Room, Secret Box, and Roomanji are three popular escape rooms in Materó. Just make sure you find your way back to Granollers before dark.

THE LEGEND OF DOLORES

There’s a traditional Spanish song that goes something like “If you go to Calatayud/ask for Dolores/She is a very nice girl/fond of granting favors.” The suggestion that, in general, the girls of Calatayud were known to immensely enjoy male companionship was enough in the past to draw young men from as far away as Zaragoza to come and ask for “Dolores” when meeting a young woman.

The legend of La Dolores persists in the culture to this day. This is nowhere more evident than at the Museu de la Dolores, tucked away in the Hospedería de la Dolores. The museum in the hotel is open only for brief periods on some days, but if you’re in luck, you’ll find the few euros needed for entrance well worth it.

The space is surprisingly larger than it first appears and is filled with memorabilia relating to the story surrounding Dolores, including musical compositions and motion pictures portraying the character, who has been immortalized over time. One example is an opera titled La Dolores which debuted in Madrid in March 1895. Another is a movie made in Mexico in 1940, the logline for which reads: “Dolores works at an Aragonese tavern and flirts with the village barber. After a quarrel she leaves, meets Lázaro, and a new job. A rich farmer goes after her, but she falls for Lázaro. The rejected barber runs a scornful song to dishonor her.” A recording by Plácido Domingo in La Dolores won a Latin Grammy Award in 2000, and a postage stamp with her image was issued in 2002.

The museum contains not only personal items—fans, shawls, clothing, etc.—of women who portrayed La Dolores, but artifacts pointing to rural life in 19th-century Spain as well.

So, was La Dolores a real person, or merely an engaging legend? In truth, Maria Dolores Peinador Narvión was born to a wealthy family in Calatayud on 13 May 1819. Family squabbles and a difficult marriage resulting in poverty later provided fodder for the folksong. She died in 1892.