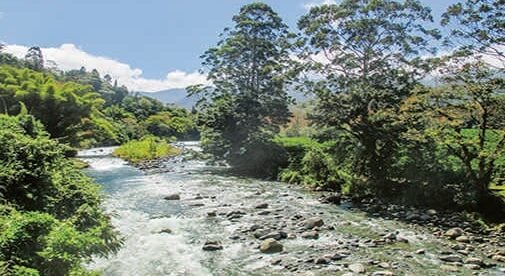 The Pacific waves rose, bubbled, and curled in front of us, the booming crash of their initial surge fading out to a treble hiss.

My wife, Catherine, let out a long sigh. It was hard to tell what the emotion behind it was.

“What was that?” I asked her, slightly concerned.

“I’m decompressing,” she answered, flashing a knowing smile. I knew exactly what she meant.

At the moment, we are sitting together in a palm shaded patch of Pacific beach in Manuel Antonio, Costa Rica, sipping from icy-cool fishbowls of margaritas, feeling the mild sting as tiny crystals of sea salt ring our upper lips. Our ritual is interrupted only by the occasional noisy munching of crispy-garlic calamari. When we tear our attention away from the food and drinks, our gaze is focused westward, as we await the amber crescendo of a tropical sunset.

Since moving to Costa Rica, “I’m decompressing” has become our catchphrase for when one of us sighs spontaneously. It’s a little counter-intuitive, I’ll admit. The idea that we would even needed to decompress after moving here was a surprise.

We thought we had lived simply in the U.S. At the time, it was pretty plausible. We didn’t try to keep up with the Joneses. We did not follow fashions or fads. Nor did we have to have the newest and shiniest gadget to feel fully upgraded and complete.

After all, Catherine and I are both easy-going artists. We created, made, and sold our own popular products, and lived deep in the country on our own farm in upstate New York.

We had felt that we were perfectly insulated from the rat race and the typical struggles of the workaday world. Well, I can admit it now; we were wrong. The commercial, financial, and consumerist pressures of the North American existence had quietly slipped in, encroached, and entered us.

Yes, taxes were soaring, heating was astronomical, insurance was skyrocketing, utilities bills climbing, and food prices were rising. But between us, we made enough to pay for it all, even though we had to work, and work hard, nearly every day. That’s normal. Right?

What we didn’t fully realize is that we lived in a place where work, sacrifice, and money were the hallmarks of success. Even now, that seems a logical and reasonable worldview, on the surface. But, for us at least, this relentless societal expectation created a great deal of internal stress and pressure, without us even realizing its full effect.

We both felt as if a weight was being lifted from us.

Though we were fully entrenched in this rut, which seemed so normal and inescapable, we eventually realized that we needed to make a change, to go somewhere different. But we had no idea where.

A chance invitation changed everything.

Our first visit to Costa Rica was on a whim, a whirlwind trip to join some friends for a few days at the very end of their annual stay in Manuel Antonio, on the country’s mid-Pacific coast.

We landed at the airport around midday, and did the routine shuffle of passports and stamps, then made our way to the exit.

Once we got outside, Catherine immediately looked at me, and I looked at her. “Do you feel that?” she asked.

It was the air, the way it felt, the way it enveloped us. The tropical ambience was like the warm embrace of a gentle flowing wave. We both felt as though a weight was being lifted from us.

Quietly elated, we made our way from the airport by foot, following a sidewalk toward a rendezvous with our shuttle. Finally, a turn onto a tiny lane led us down a gentle slope.

A sign over a shop door assured us we had found our destination. We looked around, then stepped off the lane into a small forest next to a tiny brook. We sat for the first time upon the rich earth of Costa Rica. It was Catherine who first noticed the beautifully exotic plants surrounding us.

“Over there,” she said. “We had that plant in Colorado. And that one. We had one in California. And those two, we have in New York.” She could have kept going.

She was right. Over the years, while searching America and Europe for the perfect place for us, we had carted all these exotic plants into our various apartments and houses, only to watch them slowly fade out of existence, withered by the cool of the north and by the stress of our many moves.

“These plants live here outside, all year round,” Catherine said. “Fortunately for them, without our help.”

Had we been subconsciously telling ourselves all the while, “You two need the tropics”? If so, we’re slow learners, as it took 20 years together and an urban jungle of wilted ficus and palms to realize it.

The Costa Rica we discovered on that first short trip convinced us that this was the place for us.

The friendliness of the people, the soft inviting language, the weather, the monkeys, sloths, exotic plants, toucans and macaws, the wonderful dinners, the ocean, the mountains, the breezes, and especially the way we felt here. We searched in vain for a way to describe this feeling.

As we left Manuel Antonio by air, we circled over the coast of the Pacific. Its foamy waves crashed on the beautiful shore where we had sipped margaritas and watched the sunset the day before.

“The sound I heard yesterday at the beach, just as the waves broke and slid back to the sea.”

“Uh huh?” Catherine hummed, knowing I was about to roll out one of my famous labored metaphors.

“The waves hit the shore under pressure, creating millions of tiny bubbles. It’s the bursting bubbles that make the sound and roar of a wave, not the sloshing water or the sound of the rocks. Ironically, it’s bubbles that create the calming meditative song of the waves.”

“That’s us,” I said. “Our life up north. It’s like we were underwater, trying to swim to the top to breathe. We lived under that pressure and tried to overcome it, only to keep slowly sinking deeper as we worked to gain treasure to pay our way out.”

Catherine thought about it for a moment. “Kind of like the bends, when bubbles form in your bloodstream,” she said.

“Exactly, like the bends. Only for us, they’re more like stress bubbles. I think that our sighs are the sound of ourselves decompressing.”

And that’s how the word “decompressing” became our Costa Rica catchphrase. Costa Rica, the way it affects us, the way we have reacted to it, the way we have embraced it; all of those things have been the catalysts of a life with less pressure. That is the lightness we have been feeling since we moved here.

As we flew toward San José on our return from that first trip, we crossed a line of coastal mountains above the Pacific. There atop a ridge sat a huge Romanesque-style church in the center of the town of Santiago de Puriscal, a place that we had only briefly read about, but had set our sights upon.

As we flew over, Catherine said, “That’s it. Our town.” We both smiled.

“Our home is down there somewhere,” I said. “We just have to figure out which one.”

As we passed over the ridge toward the Central Valley, one last magnificent sight stood out—a huge waterfall cascading from an impossible precipice fell deep into the jungle like a scene from The Lost World.

It was a last glimpse of paradise, as our thoughts turned slowly north, where we would again enter the fray, but this time, with a determination to plan our escape.

Catherine now says it took her at least a year after we moved here to fully decompress, and that it saved her life. I decompressed a bit more quickly.

The reasons for those stress bubbles dissipating here are many.

In a quick calculation of savings, and not being a worker bee for all those hours—and years—we have saved about $200,000 simply by living here for 10 years.

Those few things alone burst a lot of our stress bubbles. The rest floated away as we dove into Costa Rica’s culture and history, and got to know the smiling people around us. We played and created, instead of working and stressing, in a place that we love.

We have now been living in Santiago de Puriscal, in central Costa Rica, for over a decade. It’s the town we saw from the air on our first whirlwind visit.

Oh, and we often sit in the shade of a palm on the beach, drinking margaritas while watching beautiful sunsets. It’s reassuring, listening to all those bubbles bursting for us and for all those other fortunate visitors who make it to Costa Rica to decompress.