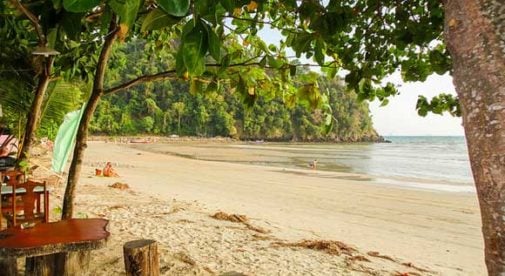 Do you want to retire in one of those places that looks like a postcard? I know you’ve seen those picture-perfect cards with the turquoise waters, white sands, and a single palm tree stretching towards the bluest sky. Those places do exist, even without the aid of Photoshop.

Not only are they real, but there are many countries in Asia where you can find those beaches. I spent weeks exploring some of the best beaches in Thailand and found six beach areas where you could send home those kinds of postcards, but with pictures you’ve taken yourself.

Thailand’s largest island, Phuket, is located in the south of the country on the Andaman Sea. Most people think of it as a party island, and for good reason. The Patong Beach area is debaucherous. But the rest of Phuket, outside of Patong, is a whole different story. Most expats live far away from Patong, where their neighbors are from all over the world. Bangtao is one of my favorite areas on the island. It is known for its four-mile stretch of uninterrupted beach.

It’s a little village in its own right, so you won’t have to go far for amenities. It has a couple of international grocery stores, as well as local markets, yoga studios, beach bars, boutiques, and a plethora of restaurants. In addition, there is plenty of nightlife and a Friday night market at Boat Avenue, where you can eat cheap local food from any number of vendors and listen to live music while sipping a cold one. But for a real Thai-style food market, head to the quiet street of Choeng Thale.

The shopping and nightlife aren’t as extensive as they are in Patong or Phuket Town, but on a daily basis, Bangtao has all the essentials. If you are a golfer, the award-winning Laguna golf course is at your doorstep. For any health issues, you won’t have to leave the island; Bangkok Hospital is a network of internationally recognized, JCI accredited hospitals, and there is a branch in Phuket Town.

Ao Nang is located in the southern province of Thailand and abuts the gorgeous waters of the Andaman Sea. No matter which way you arrive in Krabi—by car, boat, or plane—you will simply be in awe of the natural beauty surrounding you. It’s unlike any place I’ve seen in the Western hemisphere, with its limestone karsts (some locals say it’s coral) jutting straight out of the turquoise blue ocean. In some ways, it feels otherworldly, as if these karsts came out of nowhere. They are everywhere, in the middle of the ocean and the center of town; they are massive and often have trees growing right out of the tops of them.

Ao Nang is an adventure lover’s dream. You can rock climb on any number of the karsts, scuba, snorkel, island hop, go spelunking, or visit temples and hot springs. The nightlife is spread out from the main beach road, where there are restaurants of every price and cuisine.

Or go to the night market, right along the main road, where you can get fresh whole fish, shrimp, or Thai BBQ chicken, grilled for a few bucks. Some of the best and most authentic (not to mention the cheapest) Thai food you can get is usually in the markets.

A new international hospital opened in Ao Nang in 2017, but there are a few other options about 20 minutes away for any healthcare needs.

If you are looking for more of a city with a broad stretch of beach, Hua Hin is worth checking out. Its population is only about 85,000, so it’s laidback enough to feel like a beach town, but still has all the modern conveniences of any Western city. It is home to the King’s summer palace, and it’s only a three to four-hour drive (the same by train) from Bangkok, which makes it a favorite weekend getaway for Thais looking to escape the heat of the summer.

Because it’s a Thai getaway more than an international hotspot, it’s less touristy than other cities in Thailand and has a lovely authentic vibe. However, there are still about 6,000 to 10,000 expats living there, which gives it an international scene.

The Royal family lives in Hua Hin at times, so there has to be good healthcare, right? There is a JCI-accredited Bangkok Hospital right in the center of town.

The shallow green waters of the Gulf of Thailand, coupled with just the right amount of wind, make for a textbook spot to learn kite surfing. Cicada Market is a fun weekend market for locally made and sourced crafts or a place to get a drink and cheap eats.

Hua Hin is a golfer’s paradise with seven excellent courses within a 30-minute drive. Along the waterfront is a warren of restaurants and bars serving up everything from fresh, right-off-the-boat seafood, to Indian and Greek food. After dinner, get lost in its labyrinth and hop into a few of the live music bars for an entertaining night out.

Koh Phangan is Thailand’s 5th biggest island and is located only 43 miles from the mainland and seven miles from Koh Samui.

It isn’t as touristy as Phuket or Koh Samui but still has most of the same amenities. Also, having famous Koh Samui next door means anything you can’t find on Koh Phangan is just a ferry ride away.

It’s an excellent balance for anyone who wants an authentic Thai island lifestyle, isn’t a fan of all the mass tourism, but still wants the advantages of city life nearby.

Koh Phangan isn’t as polished as the other places on this list—it’s not all perfectly paved roads and chain stores. But what it lacks in modernity, it makes up for in authenticity. Plus, the full-time retirees and expats there are spoiled by some of the most beautiful beaches in the world.

Disregard all the rumors that Koh Phangan is a non-stop party. It’s undeserved. Outside the monthly Full Moon Party, which is debaucherously infamous and attracts tens of thousands of visitors, the island is pretty laid back. And since the full moon party is only a monthly soiree, the rest of the month, it’s a chilled-out paradise.

Because it’s more of a local island, food prices are lower, and there are more cheap food stalls and markets than high-end restaurants.

In Koh Phangan, there is a focus on health, wellness, and sustainable living with a bohemian vibe. The eclectic expat community is big on preserving the environment of the island. It’s also a bit of a yoga haven, so making health a priority is easy. It’s that vibe that attracts retirees and expats looking to live a healthy lifestyle

There is plenty to do if you aren’t into Full Moon Parties.

Some of the best amenities include a low cost of living, safety, a welcoming expat community, and good healthcare, like most places in Thailand.

There isn’t an airport, so you can fly into Koh Samui and take a 30-minute ferry. Or ferry from the mainland.

Koh Samui is often touted as one of the best places to retire in Thailand. It appeals to everyone. It offers a peaceful lifestyle for anyone looking for it. But it also attracts retirees and expats who want a vibrant nightlife and an active social life.

The island is Thailand’s second-largest after Phuket and is in the Gulf of Thailand. Once a coconut plantation, the island is only 15 miles long and 13 miles wide, so it’s very easy to navigate. Its crystal-clear waters are ideal for all sorts of watersports, and it has some of the best diving in the world.

Inland the jungles are chock full of exotic animals, birds, and butterflies. Trek through the jungle to any number of cascading waterfalls or find the perfect vista to watch the extraordinary sunset as the sun drops into the Gulf. And if you’re a golfer, it’s quickly turning into a golfer’s utopia.

It’s touristy because it’s incredibly beautiful. Still, it’s easy to get off the tourist track and live in more authentic areas. The main areas for travelers are Chaweng and BoPhut—but the island is big enough to get out of the masses in the high season.

Koh Samui used to be a backpacker’s haven, but in the last decade, it’s been revamped to attract travelers of all ages. Now it feels more like a luxury retreat with hundreds of spas and ways to pamper yourself. In fact, it’s known as a honeymoon haven.

It also boasts hundreds of bars and international restaurants for all budgets, including fine dining.

Like Phuket, it has an international airport, making it easy to come and go.

The island’s popularity means it has all the amenities you’ll need for a comfortable retirement. It’s more laidback than Phuket yet busier than Koh Phangan.

Located about 93 miles southeast of Bangkok, Pattaya is a small, vibrant coastal city in its own right. However, if you crave a weekend in a bigger city, Bangkok is only two hours away.

It’s one of the closest expat havens to Bangkok—and it has the benefit of being on the beach. In addition, it’s only a quick ferry ride from some of the hidden gem islands Thailand is famous for, like Koh Larn.

Pattaya has somewhat of a nefarious reputation. In the past few decades, a tourist boom has turned the once mellow fishing village into a nightlife hotspot with an emphasis on the red-light sector.

However, the city is going through somewhat of a rebirth. There has been an influx of nearly 40,000 international expats. Some work in the industrial zone (manufacturing, construction, heavy industry), and others are retired and living their best lives.

Such a high number of expats means Pattaya is starting to benefit from a more family-friendly vibe. And now, its less than squeaky clean reputation is being combated by the introduction of world-class restaurants. As a result, it’s slowly turning into a foodie destination.

This inflow has also triggered some improvements to the infrastructure of the city.

Just like any big city, all the amenities you’d need for a comfortable life are there. There are five hospitals—three private and two public. The private hospitals welcome international insurance, and English is widely spoken, so there’s no need to play charades with your doctor.

Pattaya is also home to one of the most robust LGBTQ+ communities in Thailand. Of course, this means a lot in a country that is known for being very open to the LGBTQ+ community

There is more to do than eat and party in Pattaya. There are dozens of golf courses, plenty of shopping, and loads of Scuba diving schools. If you’re not a fan of the underwater world, you can learn to kitesurf and windsurf. You’ll never be bored.

So, if you love the vibes of a city but want to live on the water, Pattaya could be for you.

The 5 Best Places for Expats to Live in Thailand