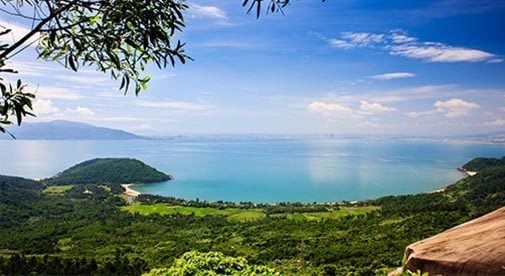 Within a couple of hours from the city, the surrounds of Da Nang are unspoiled. ©iStock/PhongTranVN

Da Nang is modern and clean, safe and friendly, with an ever-expanding population of expats and one of the most majestic beaches you’ll find anywhere. Boldly designed bridges, a riverside promenade, museums, and some of the best (and most affordable) tailor-made clothing you’ll find anywhere add to its charms.

When you’re ready to explore beyond Da Nang, there are some excellent daylong adventures in the surrounding area. Here are five of my favorite getaways.

The Ancient Town of Hoi An

Historic Hoi An, less than an hour’s drive southeast of Da Nang, became a principal trading port around 1595, and, at one time, it was the most important trading port on the South China Sea. It was originally settled by Vietnamese, Chinese, and Japanese traders and also hosted European merchants and missionaries.

Today, the town offers exquisite examples of this ancient era. Over 800 buildings have been preserved and restored, including an exquisite covered Japanese bridge. Hoi An is also considered to be a gastronomic hot spot in Vietnam. The local specialty “white roses” are a shrimp dumpling wrapped in translucent rice dough to look like the flower mentioned in their name.

One of the best scenic overlooks in Vietnam is at the top of Hai Van Pass (Ocean Cloud Pass), named for the mists that cling to the mountains as they rise from the sea. The road climbs 13 miles to an elevation of 2,275 feet. The views from the old French fortifications at the summit are magnificent— Da Nang to the south, beaches and lagoons to the north, the ocean to the east, and the Annamite Mountains to the west.

Hai Van Pass used to be part of the main highway that connects Ho Chi Minh City to Hanoi. When the Hai Van Tunnel—burrowing nearly four miles through the mountains—opened in 2005, traffic all but ceased along the old highway. Nowadays, the steep, twisting road attracts mainly local traffic, cyclists, and sightseers.

If you continue down the other side of the pass, you’ll pass by a massive lagoon before entering the small fishing village of Lang Co. Have a fresh, inexpensive seafood lunch on the pristine beach before returning to Da Nang.

Ancient Ruins in My Son

Between the 4th and the 13th centuries, My Son was the religious and political capital of the Champa Kingdom. The Cham people practiced Indian Hinduism and built intricate towers and temples during the 10 centuries that they inhabited My Son. Despite sustaining damage from weather and wars, there are still 71 standing monuments; many of them are being restored, while others are still eerily untouched.

Unlike in Cambodia’s Angkor Wat, which shares many characteristics with My Son, you won’t see many other visitors while you explore the ruins of this ancient Champa capital.

Son Tra (Monkey Mountain) is Da Nang’s own green lung. It’s only a 30-minute drive from the city center, and there is so much to take in that you could explore the area for days and not see the same thing twice. It’s easy to get there; just head toward the 220-foot-high high statue of Quan Am, Goddess of Mercy and Compassion, on the hill that overlooks the beach. She’s in the Linh Ung Pagoda complex—the first stop to make before you head into the jungle.

The dense forests of the peninsula are home to more than 100 animal species, including the red-shanked douc langur, one of the world’s rarest monkeys. If you come in the morning and stay very quiet, you might get lucky and spot some.

Misty islands shimmer in the distance.

As you wind your way up to the 2,800-foot summit of Son Tra Mountain following the empty small lanes around the peninsula, you’ll discover a 1,000-year-old banyan tree, a lighthouse built in 1903, a statue of Confucius, and serene hidden beaches. And views: uninhabited hills descend to the coastline and misty islands shimmer in the distance.

Many roads on Son Tra Mountain aren’t suitable for automobile travel; they’re narrow and steep and have no turnaround or passing areas. You’ll need a motorbike, bicycle, or your own feet to get around.

The air is refreshing even during the summer; the resort is nearly 5,000 feet above sea level. To get there, take a motorbike or taxi from Da Nang to the base of the mountain, then board the cable car for the 20-minute journey over waterfalls and dense jungle. On a clear day, you’ll be treated to an outstanding view of mountains to the west, the ocean to the east, and the castle and park directly ahead. Da Nang Easy Riders provides custom motorbike tours to all of these destinations. They drive—you ride and enjoy the scenery. Guided motorbike day trips cost about $97 per person. (See: Danangeasyriders.com).

4 Reasons to Base Your Roving Retirement in Vietnam