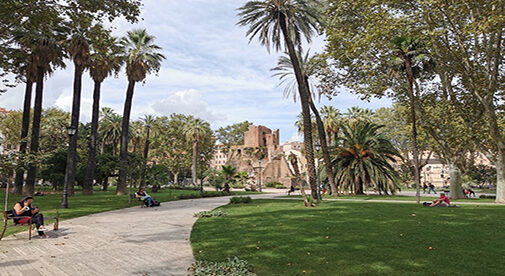 Esquilino, which sits on one of the seven hills of Rome, is perhaps the most diverse districts of the city.

“I don’t measure a man’s success by how high he climbs but how high he bounces when he hits bottom.” – General Patton

I booked rooms in what I had thought was a boutique hotel. However, upon arrival there was no one to be found. I buzzed and called…finally a person answered and berated me for disturbing them…

Turns out, it was a guesthouse that had represented itself as a hotel—and it was a filthy one at that. It was cheap, yet I still felt ripped off. A true Roman horror show.

It left enough of an impression for me to do some digging. And what I found was a failing industry…

My idea was to buy one of these failing guesthouses, strip the business, and rent the entire place out as a simple Airbnb instead. Done right, you could see big double digit yields for a small fraction of the work.

And, that’s one of the big ideas I have asked my team to hunt down during “Mission Italy.”

My scout Paul is on the ground right now getting dug in. He’s retracing my steps in Termini and seeing if this play still holds water…

Read what he’s found below…

The Bums of Rome

I can usually go without small talk on a plane. But on my last trip back from Italy about 10 years ago I indulged a chatty seat neighbour.

“What was your impression of Rome?” I asked.

“The first was the women, the second the bums.”

It took me a moment to register that he meant the homeless. Indeed, for most people who’ve visited Rome, their first point of contact with the city is the homeless at Termini Station, and not, say, Caravaggio’s Paintings in the Contarelli Chapel or any of Raphael’s Frescoes.

However, arriving through Termini last Friday, there were few homeless folk to be seen (But more than a few women—as my cheerful fellow traveler would no doubt have appreciated).

Once regarded as one of the seedier parts of Rome’s center, the area surrounding the main train station—including the Esquilino district, San Giovanni, and Tiburtino—has gotten a facelift.

No longer a place only to be tolerated as you move to and from Rome’s central districts, Termini and the larger Esquilino area are quickly becoming worthy of a spot on any tourist’s itinerary. And, due to its proximity to Centro Storico, and its significantly lower cost, it’s a prime spot for a high-yield Airbnb.

You can buy relatively cheap in a historic building, fix it up, and then tap into Rome’s strong vacation rental market.

Ronan called this play in 2014. As he pointed out, with Rome’s huge tourism footfall, and being just a short stroll from the city’s big attractions, gentrification of the area was inevitable.

And there are signs everywhere that it’s happening. Including right in Termini itself, where you’ll find the new Mercato Centrale, a trendy food hall where you’ll find some of Rome’s best take-away pizza, cheese and meat stalls, and a restaurant operated by a Michelin-ranked chef.

Here’s a video my colleague Eoin shot while passing through the station:

Literally within view of the Mercato Centrale, I found a large apartment that could work exceptionally well for Ronan’s big home play. A large apartment that you could rent to tourist groups of family or friends for high daily rates. (According to AirDNA, only 2% of all vacation rentals in Rome offer five bedrooms or more.)

According to the listing it has eight rooms. In Italy that typically means seven-bedrooms (with one living room and kitchen area). However, if the place has been run as a guesthouse, it could mean all eight rooms were used as bedrooms. This one requires more digging…

Despite the notable changes to the area, within the immediate vicinity of Termini, the streets still feel a little grotty. You’ll see litter piled up, graffitied buildings, and even some scaffolding designed to protect pedestrians from the crumbling façade of an apartment building (gentrification hasn’t fully penetrated).

The sweet spot is to go a couple of blocks closer to the historic center. Two minutes’ walk away, I found a two-bedroom apartment tucked inside the quiet courtyard of a 19th-century building for €200,000.

The street has a number of hotels and restaurants, as it’s about 15 minutes’ walk to Colosseum. This is the kind of place that could easily fetch you €150 ($175) a night at high occupancy. Really strong yield potential.

Pair that with a low-cost mortgage and it could be cash flow positive from the outset. Essentially handing you a base in Rome that pays for itself.

This area of Esquilino, which is the district where you’ll find Termini, is the only place in Rome where I saw folks working from cafes with their laptops. Prices here suit the young digital nomad set. There is good metro links, and hip new bars and cafés means they no longer need to trek closer to the center.

Esquilino, which sits on one of the seven hills of Rome, is perhaps the most diverse districts of the city. Alongside the Sicilian gourmet store, Panella and the popular café, Danilo (where you’ll find some of the best anelletti and cannoli in Rome), you’ll find Chinese and Indian restaurants and food stores.

Walk any block and you’ll see exceptional historic monuments. The first architectural work by Bernini, the Church of Santa Bibiana, sits right next to the train station, as does the Art Nouveau style Ambra Jovinelli theatre.

My biggest find however, was the Piazza Vittorio Emanuele, a square at the heart of the district, built in 1870 and dedicated to the first king of Italy. It’s the largest park in Rome (a city with few green spaces at all), and reopened in 2020 after extensive redevelopment.

It’s another huge sign of the area’s rising status. Yet, the park-side real estate here is still great value.

Overlooking the park, I found a large 210-square-meter (2,260-square-foot) apartment in a historic building with four bedrooms for €660,000.

Seems a little pricey, but in terms of potential profit it’s exceptional. For instance, according to AirDNA, there’s a five-bedroom Airbnb apartment overlooking this park and generating over €100,000 a year, with an occupancy of 83%.

And that’s just in the last 12 months, while tourism here was way down.

I sent this short video to Ronan on site:

On a street just off Piazza Vittorio Emanuele, about a minutes’ walk from the park, I found a one-bedroom apartment listed for €199,000. Taking a tour of it, it looked a little small, but had some potential as an Airbnb or a city bolthole.

I had a better find walking to the southwest of Esquilino, towards San Giovanni district. It’s a three-room apartment at 70 square meters (753 square feet) and costs €200,000.

The apartment building is right next to Villa Wolkonsky, home of the British ambassador, five minutes’ walk from Basilica of San Giovanni, and 15 minutes from the Colosseum.

Ronan says: The play that jumps out to me as exciting financially and personally is to buy a big four-bedroom apartment, make it nice, and rent it to groups.

This one play could provide you with income for life. And, enough income that it’s worth the headache of dealing with it.

In particular, if you can get a long-term mortgage. $100,000 in gross income is a very achievable target even based on modest sub 60% occupancy. Remember, Rome is a year-round tourism juggernaut. This still leaves plenty of time for personal use. And, your full cost of ownership of one of these big 4- or 5-bedroom apartments (a $500,000 to $700,000 budget) could be $3,000 per month, including mortgage, taxes, and any HOA (typically low in Italy). The costs that come off your gross rental income would depend on whether you do the work yourself or hand it all over to a management agency.

The Termini area today is significantly gentrified, but this doesn’t mean the opportunity has passed…

You pay more, but the risk is also lower, as the neighbourhood now has a lot more appeal.

10 Things To Do in Calabria, Italy