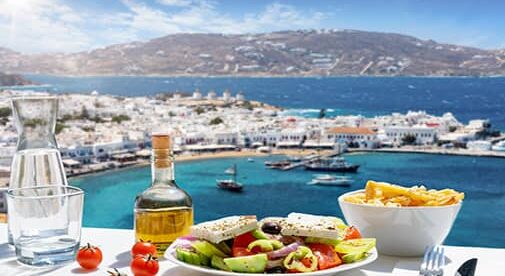 From flakey spinach pies filled with goat cheese to fresh grilled octopus drizzled with lemon and olive oil, Greek food never fails to leave an impression. Beyond island hopping, Greece is probably most famous for its remarkably delicious cuisine.

But have you ever wondered, what is it that makes Greek food taste so amazing? The answer is not one but three things…

Olive oil is part of the fabric of daily life in Greece, weaving its way from a generous splash on a salad to a cross on a baby’s forehead during baptisms. Greece has the highest per capita consumption of olive oil of any country in the world consuming about 6.3 gallons per person versus less than half a gallon per person in the U.S.

Olive oil is drizzled on everything—tomatoes, fish, bread, eggplant, beets, lamb, the list goes on. Not only does it make the meal taste amazing, but it’s also good for you and is a key ingredient in the famously healthy Mediterranean diet. If you visit Greece, you can go olive harvesting and olive oil tasting at places like the Eumelia Eco-Farm outside of Athens in the Peloponnese.

It’s no secret the Mediterranean climate produces great conditions for tomatoes, eggplant, olives, and other crops that enjoy hot summers and mild, wet winters. What is often a surprise is how unfriendly Greek soil is–over 80% of the country’s land is not arable. Farming on a large scale in Greece just isn’t possible, and this paves the way for lots of small, independently-run farms where crops are grown using old-world methods.

Take a trip to the laiki (Greek farmer’s market), and it becomes clear you won’t find a lot of heavy pesticides, genetically-modified foods (GMOs), or mass-produced, waxed, and polished produce. The emphasis on these small farms with their simple farming techniques helps keep the produce honest, flavorful, and relatively chemical-free.

Unlike its neighbors to the east, Greece doesn’t rely heavily on lots of spices or exotic ingredients. Recipes are simple, featuring fresh herbs, lemon juice, and olive oil for additional flavoring. Sea bass, for example, is caught in the morning, grilled in the evening, cut open, and served with just two things: olive oil and lemon juice. Beets and dandelion greens are prepared with the same simplicity: boiled and drizzled with lemon juice, olive oil, and seasoned with salt.

In Greece, there is a difference between a taverna menu and a restaurant menu. While classic taverna dishes often have less than five ingredients, Greek restaurants often serve more elaborate recipes. Oregano, thyme, dill, sage, and mint are popular additions in more complex dishes, but even in these recipes, the preparation is often deceptively simple. This simplicity means you can really taste the full flavor of each ingredient.

Below are a few recipes you can try yourself.

Beet and Green Apple Salad with Yogurt Dressing and Walnuts

Adapted from Carolyn Haas at Just a Pinch, this simple classic Greek recipe features eight ingredients and can be served as a side dish or a light main dish. Filling and nutritious, you’ll find this featured in tavernas all over the country when beets are in season.

Step 1: Wash the beets and trim the ends, leaving approximately half an inch of the stem at the top. Boil for approximately 30 minutes or until the outside layer is soft. Cool and rub off the peeling. Chop the beets finely. Wash, core, and chop the apple.

Step 2: In a serving bowl, mix all the ingredients, starting with the beets, the apple, garlic, and capers. Then mix in the olive oil, vinegar, and yogurt and toss to combine. Season with salt.  Sprinkle with walnuts prior to serving.

Gemista is a traditional Greek dish served in tavernas all over the country. It can be an appetizer or a main dish. This recipe is adapted from Diane Kochilas.

Step 1: Clean all the vegetables thoroughly. Carefully slice off the top of each tomato and each pepper. Keep each tomato/pepper body and cap together.

Step 2: Tomatoes – Scoop out the pulp of each tomato (try not to tear the outer skin). Leave a half-inch shell to hold the stuffing. Chop the inside scooping of the tomato, and place in a large bowl.

Peppers – Remove the tops of the peppers, leaving the stems intact (try not to tear the outer skin). Remove the pepper’ seeds with a spoon and discard.

Step 3: In a large pan, heat two tablespoons of olive oil and sauté the onions until soft (approximately 10 minutes over medium heat). Next pour in the rice and stir frequently for three to four minutes. Add tomato pulp, garlic, cinnamon stick, and water. Reduce heat, cover the pan, and simmer for five to seven minutes, until rice is softened but not cooked and most of the liquid is absorbed. Remove the cinnamon stick and season the stuffing with salt and pepper.

This dish can be served hot or cold. Serves six to 12 people.

Greek food has something for everyone. Whether you are a carnivore, a vegetarian, vegan, or gluten-free, you’ll find plenty to eat in most traditional tavernas and restaurants. To get started at home, try some of Chef Diane Kochilas’ other recipes: