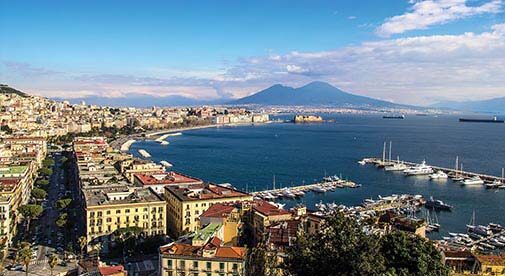 Feisty and exuberant, the port city of Naples is quintessentially Italian in character. ©Salvatore Michillo/iStock.

Glamorous and gritty, beautiful and brash, there is nothing shy about Naples. Often maligned and misunderstood, this is a city of faded splendor and unbridled enthusiasm that gets in your face with its vivacious, and often audacious, culture. In short, there is no half-way with Naples: You either love or hate it.

Neapolitans are flamboyant with colorful clothes and loud, animated conversations, along with an unabashed street culture, over-the-top hospitality, and a “love it or leave it” attitude. You’ll get the idea with about 10 minutes of people-watching at any corner in the tight web of streets in the city’s old town. An open-air theater plays out in daily life: a signora lowers a basket from a fourth-floor balcony on a rope for her groceries. Strings of laundry flap between the buildings like flags, a man and woman yell out a conversation between windows, and the scent of basil-tinged tomato sauce bubbles out an open doorway. The action and sounds are non-stop, and everything is done full-on.

A city of faded splendor and unbridled enthusiasm.

They’ve had a lot of practice. Ancient Neapolis was founded in 475 BC as a bayside Greek city that later became a Roman playground with a penchant for hedonism. It was the royal seat of power for the Kingdom of Naples, with three castles and two palaces to show for it. Maybe it is living under a volatile volcano that gives Neapolitans a carpe diem outlook. For visitors, it means a lively collision of old and modern culture sprinkled with street theatrics.

I know; Naples has a bad-boy reputation. But the city has undergone a renaissance, with many more travelers embracing its “differentness.” Here are some highlights.

A good start to experiencing this city is through its food. This is definitely something that elicits excitement from a Neapolitan, and rightfully so. Many of Italy’s best-known dishes originate here. Yes, there’s red sauce by the gallon, bursting with fresh tomato flavor. Lasagna? Neapolitan. So are eggplant parmesan (parmigiana di melanzane) and baked pasta. Spaghetti alle vongole (spaghetti with clams) hails from Naples, usually in bianco; maybe with a cherry tomato or two for color, but never drowned in red sauce. Impepata di cozze is a scrumptious spicy mussel stew.

A great place for seafood is the charming Borgo Marinari area, with colorful marina and fishing huts below Castel dell’Ovo. But my favorite place for fish is the source—one of the fish markets that also act as restaurants, like Pescheria Azzurra in the Pignasecca district. Choose your fish and they’ll cook it for you.

A beloved street food is the cuoppo, a paper cone filled with fried shrimp, calamari, and fresh anchovies. Lesser-known genovese sauce isn’t from Genoa, as one might suppose. Meat and onions are slow-simmered until they fall apart and then poured over pasta.

And of course, there’s the pizza. Mamma mia! The pizza. Everyone has their favorite place, like Pizzeria da Michele or Sorbillo’s. My preference is Pizzeria Speranzella with its perfect crust and tasty toppings. After, find a pastry shop and get a sugar high on the delicate-crunchy sfogliatelle or boozy rum-soaked spongecake baba, and wash it down with a caffè, as Napoli is the reigning champ for best coffee in Italy.

While the old town is filled with beauty, there are a few highlights you shouldn’t miss. The small Sansevero Chapel packs an eye-popping feast with Giuseppe Sanmartino’s mind-boggling sculpture, Veiled Christ; the work still leaves artists stumped as to how he sculpted the face below the transparent stone veil. The other sculptures and frescoes are just as impressive, though. If you visit only one church, my pick would be this one.

Adorned churches are all over the city, many in the outlandish Baroque style (because Naples loves flamboyant). The Church of Gesù Nuovo is intriguing; it was once a Sanseverino palace and kept the severe diamond-studded stone façade. That formidable front hides two things: a secret musical score inscribed on the diamonds, only recently deciphered; and a lush interior that is anything but severe.

Fans of Renaissance and Baroque art will go wild at the Palazzo Reale di Capodimonte, former royal palace and a repository of masterpieces by Bellini, Botticelli, Raphael, Titian, Caravaggio, and many others. It is also home to the Bosco Reale, a formal garden and wooded park that is the most extensive green space in very-urban Naples. The Palazzo Zevallos is famous for one work: Il Martirio di Sant’Orsolo by Caravaggio. While there may be another special exhibit going on, it is this singular masterpiece that draws visitors.

It’s not all Old World masters here, though. If your taste runs to contemporary art, you will revel in the Neapolitan scene. Start with the Linea 1 Metro Art that has turned the subway stations into immersive works. The Via Toledo station has been heralded as the most beautiful metro station in the world, but ride the line from there because there are 15 art-adorned stazioni. The MADRE museum is more avant-garde and set in a palace. The Museo del Novecento is inside the Castel Sant’Elmo up in the Vomero district, focusing on futurism and post-war pieces. There are six modern art venues in Napoli, so seek them out.

Perhaps the most iconic images of Naples are from the chaotic tight-grid streets in the Quartieri Spagnoli, brimming with life in all its facets. Some of the best trattorias are in this district, originally built to house Spanish soldiers. It had a period of squalor and poverty but has become more desirable and safer in recent decades, and it’s here you can really listen to the dialect and see Neapolitan life in its glory. Visit the Vicolo dell’Amore (lover’s lane), officially Vico Santa Maria delle Grazie, to see what I mean. The whole district is colorful and teeming with activity. Just watch out for those motor scooters!

The centerpiece of the city is the Piazza del Plebiscito, a majestic space outlined by regal palaces and the colonnade of the pontifical basilica San Francesco da Paola; its interior mimics the Pantheon. Next to the piazza is the grand dame Caffè Gambrinus, an elegant spot for a cappuccino or drink. Across the street is the lavish Teatro di San Carlo, one of the world’s most illustrious opera theaters. And across from the teatro is the airy Galleria Umberto I, a glass-roofed shopping center modeled after the one in Milan. I love the marble floor mosaics.

Walk Along the Waterfront

This is a seaside city, so enjoy some of the beautiful waterfront views along the bay’s promenades. There are three miles of lungomare to stroll. Start at the pretty Porticciolo Molosiglio marina or the Borgo Marinari behind Castel dell’Ovo and stroll along Via Partenope, or the Lungomare Caracciolo, that skirts the green park known as the Villa Comunale. All along the way the views are fine—the island of Capri, Mt. Vesuvius, and the city itself gleaming in the sun. If you want to jump in the water, the beaches are in Via Posillipo, below stately palaces.

For a different view, join a kayak tour with Kayak Napoli, departing from the Bagno Sirena Beach, and see the city from the bay itself.

Naples is proud of its many artisans who keep centuries-old crafts alive, so seek out the little workshops in the city center. Leather gloves are made by several craftsmen; one of the best-known is Omega Guanti, in business in Via Stella since 1923. Pretty hand-carved cameos are found in many shops, and you can even see some carvers in action working on the shells; look for cameo jewelers around Via Chiaia, the Galleria Umberto I, and throughout the centro storico; or visit the Cameo Museum.

Delicate and intricate porcelain from Capodimonte is another stunning craft that you’ll see around the city, so be on the lookout for it. Nativity figurines are a big deal here, especially in Via Gregorio Armeno, known as the Nativity Street. Every type of figure and accessory for the Christmas creche can be found there. The strappy leather Capri sandals are made by many leather shops, from pre-made and ready to wear to high-dollar custom-fitted.

Speaking of Capri, you can get there in about an hour, so why not cruise over for a day? It’s a storied, glittery place that feels like another world. Or soak in one of the hot springs on the island of Ischia, also an hour ferry ride away. Even better, enjoy the pastel paradise of Procida, much less-known and oh-so-pretty. Ferries leave from Molo Beverello, right in the city, behind Castel Nuovo. Ferries also whisk you along the Sorrento Coast or Amalfi Coast.

Not only is it a symbol of the city, it’s fun to sing that classic song “Funiculì, Funiculà” as you glide up to the upscale Vomero district on the inclined train. There are four lines; ride the Centrale line to connect the lower shopping district with the tony section above; then go over to the Castel Sant’Elmo or Certosa di San Martino for spectacular sweeping views of the city, bay, and Mt. Vesuvius. Or ride to Corso Vittorio Emanuele II and walk down to Hotel San Francesco al Monte for a drink at the panoramic rooftop bar.

Join the nightly impromptu party in Piazza Bellini, or enjoy a quieter nightcap at classy L’Antiquario, with crafted cocktails and occasional live jazz. Remember, this is a city that lives in its streets and piazzas, so anyplace outdoors in the evening is part of Naples’ nightlife scene. Lift your glass to this glorious, chaotic, passionate city.

Why I Moved to Italy