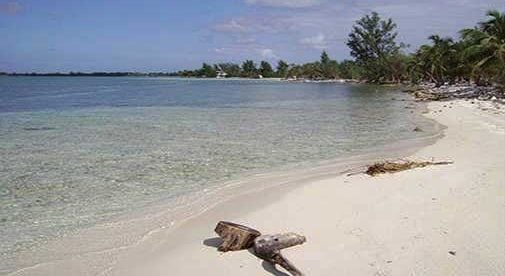 Critics of Utila say there’s little to do except chill on the beach. Fans of Utila say...exactly the same. ©iStock/gionnixxx.

Left hand holding the inflator/ deflator hose aloft, right hand securing my mask and regulator, I took a giant stride into the cobalt waters. Bobbing to the surface, I scanned to locate the dive leader. Counting heads, she signaled for us to begin our descent to the vast Mesoamerican reef—the secondlargest in the world—which awaited us 75 feet below.

The island of Utila is popular with scuba divers, but is otherwise relatively undiscovered. Her big sister, Roatán, also a popular dive destination and a cruise ship layover, is much better known. With the even lesser-known Guanaja, the archipelago forms the Bay Islands of Honduras.

The Bay Islands have a long, involved, and colorful history. Originally spotted by Columbus himself, they passed hands between the Spanish and English, and in the late 1700s, were effectively controlled by British buccaneers. A majority of the islanders still speak English as their first language, and many of them can trace their lineage back to those freebooters of old.

After a week in the enjoyable, but touristy, West End of Roatán, I opted to check out Utila. I’d heard it was quieter than Roatán and that the diving was less expensive. (Both assertions proved to be true.) I took the ferry from Coxen Hole on Roatán southwest to Utila (55 minutes, about $30), and was met at the pier by Wil, who had been sent by the Pumpkin Hill Hotel to carry me in his tuk tuk to my lodging.

My first impression of Utila Town (on this island of 7,000, there’s only the one) was not favorable. The noise and boisterousness of the pier, which bisects the town, was immediately replaced by traffic reminiscent of Southeast Asia. Tuk tuks, bicycles, mopeds, quadricycles, motorcycles, motorcycle/pickup hybrids—virtually every type of motor vehicle except full-sized autos clogged the town’s major intersection.

Negotiating his way across Main Street, Wil soon had us barreling northward on the lane (“road” being too grandiose a word for it) toward Pumpkin Hill, an outpost of development on the northeast corner of the island. Whipping around all manner of vehicles and other obstacles, Wil slowed only for the hawsers stretched across the lane to serve as speed bumps. He deposited me at the hotel, rattled but intact, about 20 minutes later.

Although most of “the action” clusters near the pier, I was seeking a bit of relaxation, so I stayed at the Pumpkin Hill hotel. Built at the foot of Pumpkin Hill, wrap-around porches looked onto excellent views of the surrounding area. Hummingbirds flitted around feeders. I tramped to the beach and to the summit of Pumpkin Hill proper.

My fellow guests were an interesting melange from several countries. One evening I was even serenaded by The Naked Drummer, a local celebrity of sorts. A medical doctor who lives on an adjoining property, he plays the bongos—pretty well, actually—when the spirit moves him. What would a tiny Caribbean island be without its cast of colorful characters?

After a week, however, I was ready for more diving, and to see the big-city lights of Utila Town.

Having made a couple of forays into town to buy groceries during the first week, I’d grown somewhat accustomed, if not inured, to the constant bustle and noise. Outside of when the ferry arrived, things generally hummed along in a more subdued fashion.

My lodging in town was a newly renovated studio apartment. As is common in Utila, the main house was above, elevated on pillars.

The brother of the studio’s owner soon appeared, and offered me a quick tour of town in his golf cart (another popular form of transport). We headed eastward, quickly arriving at the pier. Directly opposite the pier, there’s a Banco Atlántida with an ATM. Continuing east, there are several restaurant/bars, a grocer, a pharmacy, and assorted shops. Farther on is a clutch of dive shops. (Diving is the big draw here.) As the road peters to an end, the more upscale hotels take over.

The next day I decided to explore westward on foot. Within a block of my lodging I spied a man above me, surveying all from the covered porch of his home. I enquired if there was much to see heading west. This simple query turned into a 20-minute chat and an invitation to return at sundown for a bit of Flor de Caña, the rum of choice in the region. I continued past several small businesses until, after 20 minutes or so, I arrived at the public beach. For all practical purposes, it marks the edge of the town.

I did return that evening to meet up with Sam, the gentleman from the porch, a member of one of the island’s oldest families. He took me to meet a few of his friends. Together they regaled me with stories of pirates, a shipwreck (and its hush-hush salvage), the only hanging ever to have occurred on Utila, and other stories which have since faded into a rum-induced fog. Not for the first time, nor the last, I was impressed by the sincere friendliness of the local folks. 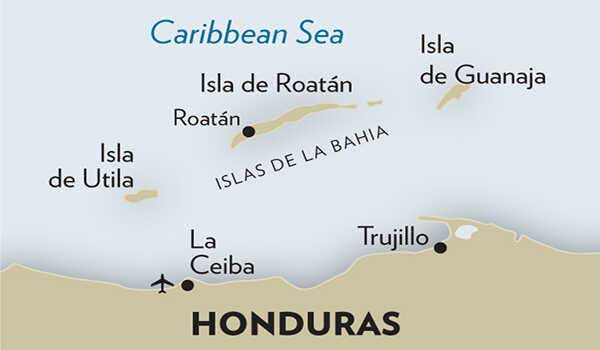 There was, I learned during our little soirée, one more part of the island that I should explore—the South Shore. An estate agent’s office was situated just a block from my studio, and there I was able to arrange a tour.

Next morning, a tuk tuk picked me up, and we rattled off to meet Brad Ryon, owner of Utila Realty. He was waiting for me in his small launch, as roads from town don’t penetrate into the South Shore.

The South Shore isn’t one spot, but rather a string of individual homes and small communities stretching over some distance. It’s where many new arrivals to Utila are settling. The majority are from the U.S. or Canada, though some are from neighboring Roatán.

Coral Beach is the largest area of development on the South Shore, and the closest to Utila Town. A typical lot here has 90 frontage feet, covers about 0.40 acres, and would run about $130,000.

The social anchor for Coral Beach is Neptune’s Restaurant. Dive boats stop in for lunch after morning dives. As afternoon advances, the locals drift in. There is a very relaxed atmosphere to the place, and as elsewhere on Utila, outsiders are made to feel welcome.

Continuing west is the Jack Neal Bight neighborhood, which is the ritziest along the strip. Beyond it lies Utopia, then Mariner’s Landing, then Jonathan Point, each of which has a few homes. Development has just begun at Sunset Properties, which lies just north of Jonathan Point. Lots here also run about $130,000, but are a bit narrower, at around 70 frontage feet, but deep, at over 200 feet. While these communities are reachable only by boat, they are still on the electrical grid. At the extreme southwest end of South Shore lie Holland Beach and Pine Point, at which point you’re off the grid.

These communities are reachable only by boat.

The infrastructure and services along the South Shore are still evolving. A few businesses closed during the pandemic, but there is Neptune’s, and a thriving grocery store as well. As development continues, there could be opportunities for those who would like not simply to retire but to open a business.

Could Utila be right for you?

Despite its undeniable allure (at lunch one day, a young woman at the next table wept openly because it was her last day on the island), you’d need to be adventurous and self-reliant to live on Utila.

With a standing population of 7,000, Utila’s infrastructure is understandably limited. While its four generators generally provide electricity reliably, you’d want to have a backup generator. Rainwater is used for washing, etc. Potable water is either purchased or obtained by treating rainwater. There is no public sewage system; each house has a septic tank.

Another concern is healthcare, which is limited. There are four pharmacies, two doctors in private practice, a small government-supported clinic, and a private Methodist clinic. Still, treatment of any serious condition requires transport to La Ceiba or San Pedro Sula on the mainland of Honduras.

But if you’ve dreamed of life on a small island, your days filled with swimming, diving, and beachcombing, Utila is well worth a look. Along the South Shore, the Mesoamerican reef lies only 200 feet out. It is still possible here to set up a well-outfitted property, on a beautiful Caribbean beach, for a price that you couldn’t touch back home. Good-quality construction runs about $100 per square foot.

You could then have an option of remaining here year-round (see box), or of returning home for some part of the year, perhaps renting out your home during your absence. Tourism high season runs from approximately Christmas to Easter, largely coinciding with snowbird season.

Where on the island would you live? There are few buildable lots left within the town, none of them beachfront. The Pumpkin Hill area, on the windward shore, is popular with a few who are seeking solitude. But for most new arrivals, the South Shore would be the place to look.

While I thoroughly enjoyed my stay on the island, living on Utila long-term might prove taxing for folks accustomed to First- World conveniences. However, many expats do opt to reside on Utila year-round. In the end, the only way to know is to visit.

VISITING AND BUYING IN HONDURAS

Utila is easily reached. There are direct flights to Roatán (RTB) from Miami, Altanta, Houston, and Dallas, and from there a daily ferry to Utila.

Honduras does not require a visa for tourist stays of up to 90 days. Simply show up with a passport valid for a minimum of six months. (Also check whether a negative COVID test or proof of vaccination is still required.)

Foreigners can purchase property in Honduras, although they are limited to lots of 0.75 acre in their own name. Larger purchases can be made through a Honduran corporation. Residency is not automatically granted to purchasers of property, but can be obtained with an attorney’s aid for about $2,500. The process takes two to six months, and the residency visa is then good for five years. For more, see: Roatantourismbureau.com/honduras.

English and Spanish are widely spoken on the islands. Honduran lempiras (approximately 25 to $1) or U.S. dollars are accepted virtually everywhere. Electricity is close to U.S. voltage. There is no need for adapters.

Three Places to Live in Roatan; Two to Avoid

10 Amazing Things to do in Hopkins, Belize

Is it Safe to Live in Roatán?