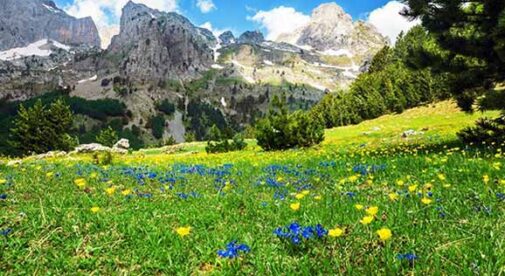 White sand and azure water. Stone castles and Turkish coffee. Cosmopolitan cities and organic vegetable markets. Art museums and concert halls. This is Albania. But alpine lakes and glaciers? I must be confusing it with somewhere else.

But I’m not! They’re called the Accursed Mountains (so called, according to a theory, by Slavic soldiers trying to cross them), or, less ominously, the Albanian Alps, and they are the southernmost and highest part of the Dinarides range, which runs from Italy through Slovenia, Croatia, Bosnia and Herzegovina, Serbia, Montenegro, Kosovo, and finally Albania. Snow-capped peaks of limestone jut from valley floors only miles from the sparkling Adriatic, tempting rock climbers with sheer 6,000-foot walls (twice the size of El Capitan in California), and dumbfounding anyone who took a wrong turn on their coastal Mediterranean tour.

Babbling brooks meander through blankets of wildflowers, filling alpine meadows surrounded by giant oak, pine, and beech. Above, a cascading waterfall empties a milky-turquoise lake slowly filled by the icy drips of an ancient glacier. Eurasian brown bear, gray wolf, red fox, European wildcat, wild boar, Balkan lynx—all otherwise extinct in Europe—freely roam in the bright sunshine of the lightly explored and protected wilderness. How can a fairytale place like this still exist? And how can you see this place for yourself?

Begin Lakeside in the City of Shkoder

You begin in Shkoder, a northern Albanian lakeside city two hours by car from Tirana that dates back to the fourth century B.C. An easy city to explore on foot, Shkoder has plenty of museums, historical buildings, shopping, cafes, and restaurants to keep you busy for days, but consider also renting a bicycle and taking a spin across the Buna River and along the designated bike path that circles the largest lake in Southern Europe, keeping an eye out for eagles, herons, pelicans, or any of the other 270 bird species that call the nature reserve home. If the summer sun is out, don’t hesitate to stop at one of the many cafes along the way to cool off with a drink and a Greek salad, or go a step further and wade into the clear spring- and river-fed water of the former Adriatic bay, not only to cool off, but to say you’ve shared the same water with one of the most diverse mollusk populations in the world (one of your friends will think it’s cool).

It would be easy to stay at a guest house on the lake for a week, spending your mornings on bicycle and comparing Albanian and Montenegrin cuisine, afternoons identifying the 39 snail species tootling the sandy shallows, and evenings on your terrace with a pair of birdwatching binoculars, a block of feta, fresh bread, and a bottle of wine, leaving the Accursed Mountains and their uninviting scree fields for the goats. But do not give in to the temptation of the snails! Answer the call of the goat and get moving.

Chances are that if you’re staying in a guesthouse or a hotel in Shkoder, the person who checked you in will have already asked if you were interested in exploring the Albanian Alps. Some may have a pamphlet with all the information about the tour—how much it costs, how many days it takes, complete with stunning photos, etc.—or some may simply say they offer an all-inclusive tour for $200 that departs every morning at such and such time. Both are legitimate, as everyone in Shkoder runs an Albanian Alps tour, some just use fancier with more professional methods of advertising it. What’s important to know is that all tours are the same: there’s one highway that gets you to the ferry, one ferry that takes you across Lake Koman, one village at the start of the trek, one route over the mountain, one village on the other side, and one road back to Shkoder. If someone says their tour is more expensive than the others because it’s the best, or it’s VIP, or it’s the safest, the only thing different they can offer is a private ride to the public ferry, and possibly a fancier guest house in the villages. But fancy is a relative term in a rustic Albanian mountain village (there are no 3-star hotels with hot tubs). Just confirm that your guest house has a private room for you, will provide meals, and that the shower will be hot. It doesn’t get any fancier than that.

So which tour provider to choose? Well, don’t scoff at my recommendation, but there is a hostel in the center of Shkoder (The Wanderers Hostel) that will book your whole journey—start to finish—for €80, and they will even securely store your luggage for the two days that you’re gone. There is no friendlier and more helpful Albanian than Silver (the manager of the hostel) and there is no better deal in all of Shkoder. He will assure you everything will be taken care of and he will be right. All you have to do now is make sure you eat a big dinner (grilled lamb, fried potatoes, Greek salad, a glass of white wine) and get to bed at a decent time; tomorrow starts early.

The van departs from the hostel at 6:30 a.m. and quickly gets you out of the city and into the countryside, following the Drin river (the longest in Albania) for over an hour, and then dropping you at the ferry departure point on Lake Koman. The ferry departs at 9:00 a.m. and you will already have a ticket reserved, so grab an espresso and something to eat at the cafe and enjoy the activity that surrounds a busy ferry port (which may or may not include donkeys stacked with goods).

Lake Koman is a man-made reservoir from the 1980s, but that doesn’t make it any less beautiful. Find a spot on the deck and allow the steep, forested limestone mountains reflecting in the electric green water envelop you completely. For a minute you may wonder how you ended up in Halong Bay, Vietnam, except there are no other boats on the water. It is only you and a handful of Albanians chugging further up the Drin river through a silent shangri-la. Like a dream, you’re jolted awake upon landing and can’t be sure if two lifetimes have passed or it has only been two minutes. But then you’re in Fierza.

The scene is hectic with all the taxi drivers yelling and donkeys being loaded and all things Albanian unfolding before your eyes, but then a man will approach and he’ll know you’re the one (maybe he was told what hat you’re wearing) and he will be your ride to Valbona village. Get in the car, roll down the window, and enjoy the hour-long ride as you wind through the dramatic Valbona Valley and along the glacier-fed Valbona river rushing to your left. Before you know it, you’ll be welcomed by a smiling family at a stand-alone stone house with a wrap-around porch in a meadow beneath towering limestone cliffs. Spend the rest of the afternoon exploring the valley and the tiny village and then find a table at a cafe with a view of the pass you’ll climb the next day. Sip your espresso slowly and consider ordering a shot of raki for courage. The sun will cast a long, cold shadow as it sets behind the jagged mountains; take it as a cue to get back to your guesthouse for dinner and an early night.

The trailhead is about three miles from your guesthouse. In the morning, you’ll have the option to wake up before the sun, eat a quick breakfast, and head out on foot. Alternatively, you can wake up with the sun, enjoy your breakfast, and pay €2 for a ride to the trailhead. My advice: take the ride. You’ve got a lot of walking ahead of you (eight miles); no need to add three more on top of it. Plus, who would think of rushing from such a serene, sun-filled meadow? Have another cup of coffee, accept the lunch that has been packed for you, and then get in the car.

Test Your Limits on the Valbona-Theth Trail

Now the hike. A sign at the trailhead shows a detailed map and assures that you won’t get lost because the trail is clearly marked the entire length with red-and-white painted rocks. Standard warnings of weather and rock falls and wild animals are included, but don’t let that turn you off; this is going to be a piece of cake. Make sure your water bottle is filled, snacks are accessible, a rain jacket and base layer is packed, sunscreen and sunglasses are handy, wallet is full of cash (for the guest house), and boots are tied tight. Now you can be on your way.

When I say “piece of cake,” I may be lying a tad. Over the next eight hours, you’re going to cover eight miles and gain over 3,000 feet in elevation. Depending on how fast you hike, and how pro or against breaks you are, this could be a butt-burning, lung-sucking, t-shirt-drenching experience. So, I recommend taking it slow. Enjoy the scenery. Have a rest at every turn and sit down when the view calls for it. There are cafes along the way (seriously) that invite you to take off your bag, have a seat, and order something cold to drink. Stay for an hour if you’d like. Have a bite to eat. It’s part of an experience that you won’t find in many places in the world, so soak it up.

At Valbona Pass (the highest point of the trek), it won’t be exhaustion that knocks you on your butt but the spectacular view (and exhaustion). Take a million photos and then put your camera down and try to believe that you walked to this magnificent place in this amazing country on this beautiful day, and try to forget that you’re only halfway done. But the rest is downhill! Enjoy your lunch, fill up on water, and get back to walking, keeping in mind that a hot shower and a beer are waiting for you on the other side.

You’ll reach the edge of Theth Valley in the late afternoon feeling giddy or lightheaded or both. Take one last break under the trees and fight the urge to nap; have a granola bar instead and get back to your feet. At the valley floor, you may be confused about which way to go, and if you don’t have the guesthouse saved on your phone’s map (you should), go left (toward the church). Houses and farms will appear, goats and children will greet you, and the sky will brighten to the bluest you’ve ever seen. A smiley old man will wave to you and show you to your room. Take off your boots, have a hot shower, ask for a cold beer, and go sit in the grass. Fried fish and hot potatoes will be served soon, but first, a celebratory shot of raki for you and anyone else who just conquered the Accursed Mountains.