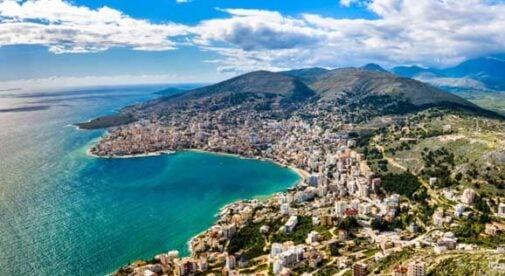 Until 30 years ago, Albania was a communist country, relatively unknown to much of the world’s population. However, the 1992 elections saw the end of communism, and when this incredibly beautiful country opened its doors to the world, we learned what a gem we’d been missing. From her beautiful coastlines to the Albanian Alps, here’s the scoop on the Balkans’ unpolished diamond, Albania.

How to Get to Albania

Over 3 million passengers arrive each year at Tirana International Airport, on both budget and full-service airlines. Tirana is the capital of Albania and is centrally located, making ground transportation from the airport easy and accessible. At present there are dozens of airlines serving the country, connecting from most major cities in Europe, including Rome, Venice, Milan, London, Vienna, Oslo, Zurich, Paris, Brussels, Frankfurt, Munich, and many more.

It’s an understatement to say that the geography is incredibly diverse. Located in Southeast Europe on the Balkan Peninsula, Albania is roughly 50 miles east of the boot heel of Italy. Therefore, the western border of this Mediterranean country is a 475-mile coastline on the Adriatic and Ionian Sea, with stunning world-class beaches. Land borders include Montenegro to the north, Kosovo to the northwest, North Macedonia due east, and Greece to the south and southwest. Albania covers approximately 11,000 square miles, making it slightly larger than the U.S. state of Vermont.

In addition to the beautiful coastline, there are over 247 natural lakes and some 800+ artificial lakes in the country. Lake Shkodër, sharing the northern border with Montenegro, is the largest lake in Southern Europe. To the east, forming part of the border with North Macedonia, is Lake Ohrid, the oldest and deepest lake in Europe, some 1.4 million years old and nearly 1/4 mile deep. The area around the lake on the Albanian side is designated as a Managed Nature Reserve, and this area is home to more than 300 endemic animal and plant species. In fact, Albania has a wide range of wildlife, both common and rare/endangered species. These include brown bears, golden jackals, gray wolves, the Balkan lynx, the golden eagle, Egyptian vultures, monk seals, bottlenose dolphins, and in the lagoons, the extremely rare Dalmatian pelicans.

Mountains cover the country from north to south, with Mt Korab (on the North Macedonian border) boasting the highest peak at 9,068 feet above sea level. Many consider the trekking and hiking in Albania unlike anywhere else on earth, with rugged other-worldly beauty. As a hiker with thousands of miles on several continents under my belt, I wholeheartedly agree. There are many English-speaking guide companies throughout Albania, for those who wish to have a memorable trekking or hiking experience.  Both guided and self-guided trips are available, of varying lengths and difficulty levels.

In addition, there are horseback excursions, rafting and kayaking trips, snorkeling, paragliding, and much more. One particularly memorable trip I enjoyed was a safari through the national park in the Përmet region, which includes hiking through an ancient canyon (human remains found in one of the caves date back 4,000 years), visits to nearby archaeological and historic sites, an organic lunch, and a soak in thermal springs at the end of the day. Whatever you choose, you’ll never be disappointed in Albania!

The population of Albania is 2.8 million, with the capital city of Tirana containing the bulk of the population at 400,000. From there, rounding out the top five most populous cities are Durres (122,000), Elbasan (100,000), Vlore (89,000), and Shkodër (88,000). The population is slowly declining each year, as Albania has a low birth rate (fewer than two births per woman) and a high rate of citizens leaving the country. The latest population review (UN estimate, reported by World Population Prospects, July 2021) shows that since January 2021, there has been an average of 89 births per day, 66 deaths per day, and 38 citizens migrating to other countries each day, during the first 6 months of 2021, resulting in a net population reduction of 3,000. Currently, the government is discussing possible solutions to increase birth rates, including financial incentives to families.

Albania enjoys a typical Mediterranean climate, which means hot, dry summers and cool, damp winters. Like the rest of Europe, July and August are the hottest months. In the south, this means average temperatures of 68 F overnight and 86 F in the day. January and February are the coolest months, with daytime temperatures averaging 66 F, and overnights around 48 F. In the north, temperatures are slightly cooler, with snow in mountainous regions.

The government of Albania is a unitary parliamentary constitutional republic, with many parties and therefore what is almost always a coalition government. The current president is Ilir Meta (Socialist Movement for Integration party) and the prime minister is Edi Rama (Socialist Party of Albania). Presidential elections are held every five years, and the president is head of state and commander in chief of the military. The prime minister is head of government, and is appointed by the president after parliamentary elections, and serves a four-year term. The constitution sets no term limits.

Albanian (‘Shqip’) is the official language, with the Gegë dialect being spoken in the north and central areas, and Toskë dialect prevailing in southern Albania. There are estimated to be some 7.5 million speakers of Albanian not only within the country, but in communities in Europe and beyond. Not closely related to any other language, Albanian is the sole surviving language in its Indo-European branch.

So, there you have the basics. Albania is a rare gem, still a bit unpolished, but that rusticity is part of the appeal for me. Add in the unique geography and diverse climate, and you begin to understand what makes Albania special.

Albania is the perfect location for those looking to get off the beaten path and experience a simpler life, and to be a part of watching (and helping) this beautiful country continue to develop. Book a ticket and come see what Albania has to offer you. Her arms are open wide, just waiting to welcome you!

What’s the best time of year to visit Albania? That’s a question I’m often asked, and the answer is as individual as the visitor.  Personally, I’m a warm-weather gal who loves the beaches, so I practically live outdoors for about nine months of the year here in Vlorë, then hunker down with baking, jigsaw puzzles, and knitting during the cool, wet months.  But if you’re anything like my friend who is currently visiting Berat, mountain climbing in the deep snow of Mount Tomorr, you’ll find loads to do in winter as well.

Actually, of the Köppen Climate Classifications, Albania boasts seven types in the C, D, and E groupings, ranging from hot Mediterranean summers to subarctic and even tundra in the northeastern mountains.

Albanians tend to say that we have just two seasons—hot dry summers and cool/cold wet winters. But these two seasons vary by region, so let’s take a look at what you can expect.

Albania boasts roughly 300 days of sunshine every year, and much of that is late spring through early autumn.

I live in Vlorë, on the southwest coast, which has an exquisite Mediterranean summer with beach season lasting from the end of April through the last days of October. In April, the daytime temps along the coast are about 70 F, May through September temps rise into the 80s, climbing to as high as 88 F, with possible extremes of 90 to 92 F for a couple of weeks at the end of July and the start of August. Tourists abound in July and August, as is the case throughout Europe. By September they all head back to work and school, and the beaches are quieter, but temps are still in the 70s through the end of October.

But Albania is not just about the beaches in summer. About 70% of Albania is mountainous, with an average altitude of half a mile above sea level, climbing up to just over a mile and a half in the Albanian Alps, with the highest peak being Mt. Korab (9,000 feet above sea level). The inland climate is related to the altitude, so it will be cooler the higher you are. There’s plenty to do inland, including hiking and rafting.

This is when the temperatures drop and precipitation increases in all areas of Albania, and saying it’s wet is a bit of an understatement, in my opinion. In the lowlands, rain amounts measure from 40 to 60 inches annually, and 95% of that is in the winter months. The precipitation is even heavier in mountainous areas.

On the coast, by November we are no longer swimming, but on dry days, cycling and tennis can be enjoyed. Temperatures in the day are in the 60s F in November and December (dropping to the 50s in January and February), and although we have quite a few rainy days each week, it’s usually not all day. The streets might flood a bit, and although they drain quickly when the rain stops, a pair of galoshes can be bought if you’ve forgotten to bring yours. The winds on the coast are rugged in winter, so don’t forget a strong umbrella. I still enjoy walking the deserted beaches most days, and while the sea is wild and rough, that just adds to winter’s beauty.

If snow (and skiing) interests you, visit the Albanian Alps in winter—you’ll think you’ve just been dropped into a picturesque winter postcard. Whether you want to be outdoors enjoying skiing and hiking, or just snuggled up by a fire (roasting chestnuts!) in a cozy guesthouse, the popular wintertime destinations include Valbona, Dardha, Mt. Dajti, Shishtavec, and Voskopoja. In particular, Dardha is known for its ski resort, which has two lifts. But the winters can be quite harsh, with both heavy snowfall and very low temperatures, so be sure to carefully research the area you are thinking of visiting.

Wherever you are in December, you’ll get a good strong dose of holiday cheer. Although the country is predominantly Muslim, and most don’t celebrate Christmas, they decorate like nothing I’ve ever seen. Lights, sleighs, trees, reindeer 30 feet high, and much more! The lights and decorations stay up into the New Year, which is their biggest celebration of the year.

NB: Depending on where you live, everything may be closed for up to four or five days at New Year’s. Here in Vlorë, I wasn’t warned about that my first year, and found out the hard way. Midway through the fifth day, shops started to re-open, to my relief. Forewarned is forearmed, so be sure to shop ahead.

So, what are you waiting for? Come and visit us, and see how spectacular Albania is, whatever time of year you choose!

Why I Fell in Love With Albania… And You Will Too