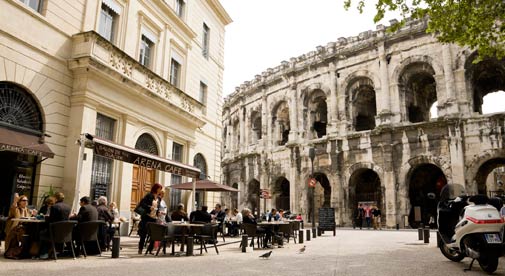 Walk the narrow, leafy streets of Nîmes, in southern France, and you may find yourself longing to wear a Roman toga. While the city is the birthplace of Serge de Nîmes, or “denim,” as it is commonly known, it is the 2,000-year-old Roman architecture that may inspire you to wear some Roman attire.

Renowned as the “Rome of France,” Nîmes boasts a number of incredibly intact Roman structures that can be found throughout the city. Clustered together, these ancient legacies can easily be visited on foot.

The Arena of Nîmes

The Arena of Nîmes is one of the best-preserved amphitheaters in the former Roman Empire. Built in the 1st century, this imposing structure is a marvel of ancient engineering.

With the capacity to seat 24,000 people, the arena was built with retractable canopies that would protect spectators from inclement weather or the intense sunshine of southern France. Underneath the arena, galleries were constructed that would allow gladiators and performers to warm up before they fought.

The building also featured hundreds of stairwells and passageways to enable easy entrance and exit. These vomitoriums minimized the chances of people being trampled in a stampede. However, after the fall of the Roman Empire, many of the openings were sealed shut to fortify the arena against barbarian attacks.

At one point, over 700 people lived inside the walls of the arena. They built everything they needed for a self-sustaining community, including water wells, houses, and churches. These structures existed inside the arena until the late 1700s.

In addition to the arena, Nîmes is also home to Roman delights of a more peaceful nature. Like every major city in the empire, Nîmes had a central square called a “forum” where business was conducted.

Together with its vibrant marketplace, the Forum of Nîmes also featured a temple built of glimmering white stone. This temple, built in the first century, is known today as the “Maison Carrée.”

One of the best-preserved Roman monuments in existence, the Maison Carrée was renovated in 2011. As a result, its illustrious white stone once again basks in the glorious Mediterranean sunshine and serves as the perfect backdrop for an afternoon picnic, cup of coffee, or simply a few moments of introspection.

Not far from the Maison Carrée is a little known, but incredibly important example of how the Roman Empire was able to support such large city populations. Named the Castellum Aquae, this structure served as the primary water distribution point for the ancient city of Nîmes.

With little fanfare, the stone castellum emerges from underneath a modern building and fans out in several directions towards the city. This relatively small site was the terminus of a grand aqueduct that stretched for over 30 miles and included the region’s iconic Roman bridge: the Pont du Gard.

Upon completion of the aqueduct, the Castellum Aquae would distribute over 10,000,000 gallons (40,000 cubic meters) of water each day to the city’s thirsty population. There were even three large drains in the bottom of the castellum that were thought to be used to rapidly flood the floor of the nearby arena to enable mock naval battles.

The city of Nîmes was founded on an ancient Roman superhighway known as the Via Domitia. This heavily trafficked stone road once linked Spain and Portugal to Italy and the rest of the empire. Today, it is known as the A9 and encompasses several cities of the French Mediterranean coastline, including Montpellier, Narbonne, and Perpignan.

While Nîmes does have an airport, the region’s major international hub lies in the nearby city of Marseille. The city also has high-speed rail links to Paris.

Whether you’re planning a vacation or the next stage in your life, Nîmes offers a wide selection of possibilities to satisfy your inner Roman—even if you’re not ready to trade your blue jeans for a toga.