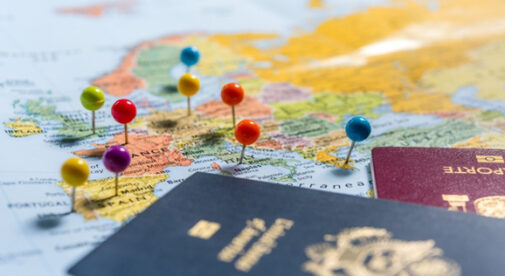 A second passport is more than just a trendy travel accessory.©iStock/CHUYN

A package arrived at my apartment in Prague recently—from Russia with love.

It had come by way of Amsterdam. A bit of John le Carré spycraft, really. An elderly woman in Crimea had delivered alternate identity documents to a younger woman, who had then handed them to her husband, who traveled with them—undetected—to the Netherlands, where he dropped them in a postal box for onward delivery to Prague.

No lie. This is the path by which my mother-in-law sent documents that would allow my wife, Yulia, to reclaim her Ukrainian citizenship and, thus, a new Ukrainian passport.

Her mother, rightly, didn’t trust the Russian postal service. She fully expected that the government would open any package sent to Europe and would confiscate the documents—all of Yulia’s proof of her Ukrainian life before Russia took control of Crimea, where she grew up.

Soon, her mother will pursue a similar path with Yulia’s life savings, since my wife has no way to access her Russian bank accounts from the Czech Republic.

As Americans, we never really think in these terms—how to prepare for the day we might need a non-U.S. identity. We’ve never had to. America has been a rock of political and social stability for our entire lives, and for decades before that.

But as they say in the financial markets: Past performance is no guarantee of future results.

I’m not telling you anything controversial when I point out that America’s financial and social fabric is fraying. Nothing may ever come of that. Maybe this is just a strange phase America is struggling through and all will soon rectify itself.

It’s the “not” that concerns me.

I see many paths by which what we know devolves into something we don’t want. And I routinely ask myself a number of questions:

Such questions seem like tempests in a teapot for most of us because we wake up every day to just another normal morning wrapped in Uncle Sam’s blanket of stability.

Thing is, normal is a fragile word. Add two little letters—A and B—and suddenly your world is upside down.

I watch Yulia deal with her suddenly abnormal world every day.

I saw how a single day in February, when Russia invaded Ukraine, set her world careening in a different direction.

Access to her money quickly stopped as sanctions against Russia set in. She couldn’t fly back home to Crimea to withdraw money from her bank because air routes were shut off, and she was worried she might not be able to get back out.

Which explains her quest to reclaim her Ukrainian passport. And, thus, her mom’s efforts to surreptitiously move the necessary documents out of Russia for fear of their confiscation.

Again, I will say that this is hard for many Americans to fathom because it is so far removed from any experiences most of us have had. And yet this is exactly the kind of event all of us have to worry about because life is not a string of status quo days, even in the U.S.

One day, everything is normal and the next day the Twin Towers are falling…or Lehman Brothers collapses and housing prices plunge and millions of Americans lose their homes…or a highly contagious virus spreads and shuts down the global economy and the U.S. closes its borders.

These things happen. All the time.

What event will be next?

I know that sounds farfetched. We’re talking about America! That only happens to other places. I know the arguments. I hear them all the time.

By then, as Yulia is finding out, dealing with the fallout after the fact is substantially more difficult. Which is why you should investigate your own second passport options sooner rather than later.

Editor’s Note: A second passport is the ultimate way to protect your family’s safety, security, and wealth and can open the door to a world of international investment and income options that are off limits to you now. That’s why Jeff is hosting a special event this November: The Second Passport Seminar: Why You Need One and How to Get One. This event will be your ultimate guide to protecting yourself and your family in an uncertain world.

Participation is limited so we can be sure everybody gets their questions answered. So don’t wait to register and risk missing out. Right now, you can still secure your spot here.

A Second Passport Without Having to Buy or Inherit It