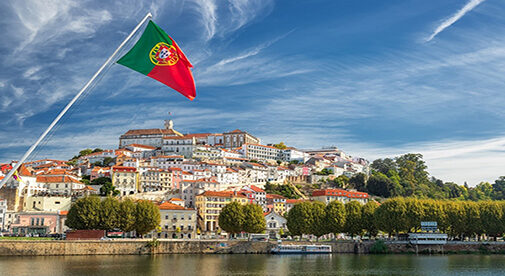 Portugal is foreigner friendly and internationalized. It’s a place that has learned how to attract capital investment, expats, and tourists…

I pull back the sliding glass doors to let in the sound of the Atlantic waves.

From my terrace, miles of golden-sand beach stretch out in front of me, covered in rolling dunes, and dotted along the way with cliffs and coves…

It’s about as majestic as life gets…

Indeed, Praia D’El Rey, where I have my base on Portugal’s Silver Coast, literally translates to “Beach of the King.”

And I feel like a king every time I’m there…

I have access to incredible golf…miles of beach, often all to myself…and any time I want, I can head to a nearby historic town and villages for 70-cent coffee and fresh seafood (that’s USD).

Now, about two months after vacating my condo there and handing the keys to my rental manager, I have already collected nearly €8,000 in rental income. (My mortgage is only €607 a month.)

The thing is, I didn’t buy on the Silver Coast for financial profit…

I bought there because it’s a place that I love and it’s one of the few places in Europe where you can still find incredible bang-for-your-buck on beachfront real estate.

It’s one of multiple homes I have around the world. And it’s a nice perk that it can pay for itself with rental income when I’m not there.

When it comes to making a true profit play—investing solely for financial gains—Portugal has so much more to offer. It’s a country that’s packed with opportunity for savvy real estate investors…and it’s the reason I’ve been coming here since 2002.

More than any country in Western Europe I’ve been drilling down into Portugal. Over the last few years I’ve spent many months scouting here.

Every time I go now, I’m impressed by the progress. Portugal is getting its act together and doing smart things…the kinds of things that drive growth and create buying moments. There’s a sense of optimism, a confidence that has helped the country go from a global backwater to a trendy tourism destination.

Portugal is foreigner friendly and internationalized. It’s a place that has learned how to attract capital investment, expats, and tourists…

Pre-Covid, tourism was on a tear in Portugal. In 2019, the tourism sector grew by one of the highest rates in Europe and contributed one in five of all jobs in the country.

And I expect tourism to bounce back fast and continue to grow as travel returns to normal, and as Portugal grows up as a country and sells itself around the world. (In the last few years there has already been a rise in the number of folks coming from the U.S. and Asia.).

For real estate investors, however, the pivotal moment was 2012…the year rent controls were abolished.

Up to that point, rent control was a crucial reason many old buildings in Portugal’s towns and cities became dilapidated. It meant that landlords couldn’t increase their rent—not even to match inflation—meaning some tenants were paying as little as €4 per square meter.

With rents so low for so long, building owners weren’t motivated to invest in maintenance, repairs, or upgrades. Buildings were abandoned…left to rot. Owning a rental just didn’t make sense.

Then, at the stroke of a pen, the rules of the game changed. With rent controls gone, many landlords saw a rapid rise in income, with some rents rising eightfold, from €60 a month to €500. Buildings that were viewed as worthless wrecks now have huge potential as boutique hotels or fancy apartment blocks.

This triggered a building frenzy in prime central parts of Lisbon and Porto, and I expect historic cities like Coimbra and Evora could still follow.

When you look at Portugal as an investment opportunity you need to remember how young this modern iteration of the country is: until 1974 this was a hopelessly run dictatorship. It’s just now finding its feet as modern country, and it’s doing so fast.

Portugal is an extremely attractive place for mobile people. It’s safe, secure, and has good transport and infrastructure. The education system is good, and the cost of living is incredibly low.

Portugal has been successfully attracting these mobile people, businesses, and money. The authorities have been smart about this with their Golden Visa and non-habitual resident regime. The Golden Visa is a fast-track visa program for investors from outside the European Union.

For real estate investors, as well as lifestyle buyers, there are wildly different opportunities on offer in Portugal…

For instance, yesterday I shared hot hill town properties my scout found on a recent trip that listed from as little as €22,000 ($25,917).

These were in a part of Portugal that’s still very much undiscovered. For the right person, with a passion for remodeling and the imagination and creativity to make the most of a stunning setting, there’s an opportunity there to own a bolthole, a retreat, and perhaps a money-maker all in one.

In Lisbon, the story couldn’t be more different—with a very different kind of opportunity. Gentrification has steam rolled through. The Golden Visa has been a huge driver. Chinese, Brazilians…international folks with money are happy to do a deal to get the benefits of this program.

At the same time, tourism went on a tear. Numbers rose for eight years and grew at more than double the European average.

This all added up to sky-rocketing prices. You have a lot of new supply. Supply that needs a flow of tourists and investors to keep it all moving. But the tourists have stopped, for now, and things there feel fragile.

Prices are far too high to be sustainable. And with pressure coming in from the bureaucrats in Brussels to curb the Golden Visa, prices here could crash. Perhaps creating a new buying moment for us.

In Porto, the opportunity is to get in ahead of the gentrification.

The gentrification that ripped through Lisbon has also arrived in Porto, but it’s still a number of years behind. Central Porto is full of dilapidated historic buildings but these days on any short walk you’ll see restoration projects everywhere.

There are now a lot of one- or two-bed short-term rentals. But I figure there could well be a better opportunity to earn from a medium-size house with a few rooms. You may find your niche catering to large groups, bachelorette parties, families, or families on a weekend break.

On my last trip there I found apartments for around €130,000 in older buildings. Find one in a brilliant location and you could rent for €100 a night.

Another city I have my eye on in Portugal is Coimbra. Coimbra has long been a strategic place. Once the capital of Portugal, it’s halfway between Lisbon and Porto. The city’s university is ancient, founded in 1290, and Coimbra is often called “the Oxford of Portugal” or sometimes “the City of Students.”

Like many of Portugal’s towns and cities, much has fallen into disrepair. But prices are insanely cheap. Even as exciting things are happening.

In 2013, Coimbra’s university was declared a UNESCO World Heritage site. (It’s 729 years old.) That brought a lot of grant money to restore the historic campus and to create a network of museums and cultural attractions. The Joanina Library is a major draw. Considered one of the most beautiful libraries in the world.

And Coimbra is a huge draw for newly moneyed folks who invest in an international education for their kids—the new middle class from former Portuguese colonies like Brazil, Macau, Angola, and parts of India.

Meantime, while all this is happening, hardly anything has yet been done with the old town that sits just below the ancient university campus. It’s ripe for gentrification and it feels like almost no one has yet caught on to the opportunity.

Everything here looks and feels like Lisbon was 15 years ago and Porto five years ago. No one sees any value in these old buildings. They sit abandoned.

The opportunity to buy big prime buildings on the main squares of Lisbon has passed. In Porto the window is closing. But in Coimbra we can still buy big buildings fronting onto prime squares for very little. Perfect for hotels, apartments, and high-end retail.

However, when it comes to pure profit, there is nowhere on my beat quiet like the Algarve on Portugal’s southern coast.

With one of the best climates in Europe and around 300 sunny days a year, the Algarve attracts a huge mix of markets. It’s an internationalized destination that draws Northern Europeans, North Americans, and even folks from as far away as Asia…

For instance, one member bought two condos as investment properties about five years ago for approximately €430,000 each. They rented them both, bringing in an average of about €30,000 (a 7% gross yield) a year each and recently sold one for €650,000. Those are some serious gains…

For a real estate investor, timing is everything, and right now there is a unique buying moment in Portugal as the country recovers from the economic turmoil caused by the pandemic. (Plus, right now, Portuguese banks are lending to foreigners at incredibly low rates—we’re starting to see rates of as little as 0.9% or less—with as much as 80% loan to value.)

Pieternel says: Dear Ronan, Love reading your travel stories, and feel that the time is right to move.

Born and raised in the Netherlands, I lived in several European countries, before moving to Canada, and eventually the U.S.

After having my kids at a very advanced age, who are now on their own, and leaving my husband several years ago, I am ready to leave Florida and move back to Europe. Portugal, despite never having been there, keeps catching my attention.

After a couple of previous planned trips next month, I am planning, Covid willing, to check out Caldas da Rainta, but I am worried about the winter weather. The Algarve region might be better, since I am used to being in the water year-round, and I like to play tennis as well as other racket sports.

Unfortunately, my divorce was not well planned on my end, and unlike you, I can’t follow the sun year-round. I also like to be in Colorado for several months a year.

Ronan says: Hi Pieternel. Drop me a line when you get to Caldas. My wife and I do a lot of our shopping there. And, on Friday evenings we like to go to a beachfront restaurant just outside Caldas in Foz do Arelho.

As the crow flies, Foz is just a few miles from home for us. But the drive takes about 30 minutes, as we have to go around the lagoon. 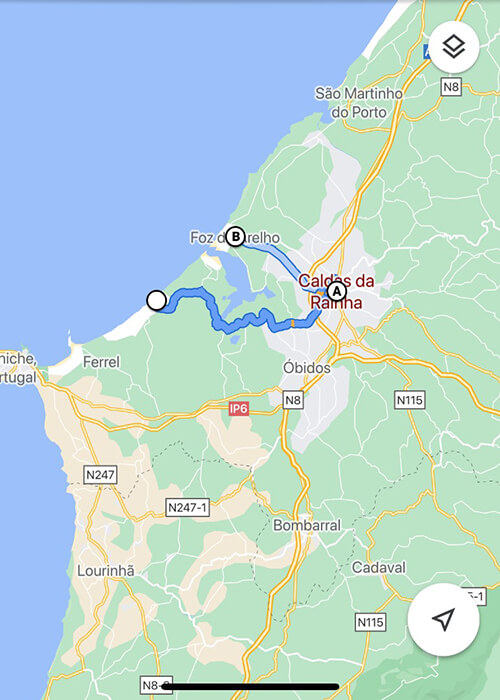 It’s really beautiful there. You have a big wide empty beach where wild Atlantic waves crash. Then, the protected sand bottomed lagoon is perfect for paddle boarding and kayaking.

I love it there. The Silver Coast has so much going for it. But even in May it can be chilly. Certainly, chilly compared to Florida. You will get much more sunshine and warmer temperatures year-round in the Algarve. However, if you’re seriously thinking about moving there, I’d suggest spending time in the winter there first.

What Language is Spoken in Portugal?