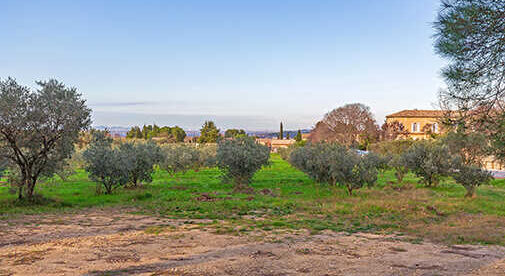 Saint-Remy-de-Provence is exactly the sunny French retreat Keith and Val dreamed of. ©Baloncici/iStock

“Life in Europe had been in color, and it was sort of in black and white in California. We wanted to find that color again,” recounts Keith Van Sickle, an ex-resident of Silicon Valley and CFO for start-up companies. After a four-year expat experience in Switzerland, Keith and his wife, Val, were hooked on the European lifestyle.

In 1994, the couple packed up their home in Menlo Park, California and embarked on a life-changing adventure in Neuchatel, Switzerland. Keith, who was working at an American company at the time, had accepted an offer to represent his firm in the company’s Swiss office. Surrounded by the beautiful alpine countryside, and French-speaking colleagues and neighbors, Keith and Val were in for the ride of their lives.

Everything was new and exciting. The sights, the sounds, the new foods, and pared-down pace of life…the couple didn’t want to miss a minute. Often, they took to the road, exploring as much of Europe as possible in their free time. When Keith’s assignment came to an end, it was hard to say goodbye to it all.

“When you move to a different country, it’s life changing,” says Keith. “We loved it. We traveled all over Europe. We traveled to France a lot. When it was over, we came back to California. As much as we loved it, we really wanted to go back to Europe.”

One European region in particular, southern France, had captured Keith and Val’s hearts. In the town of Saint-Remy-de-Provence, they discovered rich cuisine, sun-splashed farmers’ markets, and a certain quality of light illuminating the fabled Alpilles (“little Alps”) mountain range at sunset.

Beyond the town’s captivating beauty, Keith and Val appreciated its enviable location in the heart of Provence. “It’s a town that’s a good size, big enough to have things going on, but not so big that it’s like a real city,” says Keith. “It’s surrounded by a lot of interesting little villages to visit. There’s a lot to see, the food and wine are great. The style of life is amazing, and there’s a lot of Roman traditions. We just keep coming back, we never get tired of it.”

The couple returned year after year to vacation in Saint Remy, and eventually decided they wanted to make the town their part-time home.

The only question was… how?

Keith says that they weren’t ready to give up their day jobs, or plunge head-first into a new venture, so capitalizing on their combined talents seemed like the right road to take. The couple became consultants in their respective fields—Keith in finance and Val in economic development. It didn’t happen overnight, and it took several years to build up their client base to a point where they could feel comfortable making the part-time move abroad.

In the end, flexibility was the key to their success. They could essentially work anywhere, at any time.

“You can work a lot part of the year,” says Keith, “and then not as much for another part of the year. And we structured things around that, so we could spend three months in France and mostly not work, but do some, as needed. We started it as an experiment, and it worked well, so we’ve been doing it since 2008.”

Through a bit of trial and error over the years, Keith and Val have discovered ways to optimize their “life in Saint Remy” budget.

“Don’t get a place in a main tourist town,” says Keith. “Near, but not in the main town. Stay away from high season, plan to go in the spring and fall. In July and August, prices can quadruple. If you stay long-term, negotiate for a discount. You can get it. People love long-term stays—everybody wins.”

Keith says that Val does most of the legwork when it comes to choosing the rentals. Preferring to use rental sites like VRBO (see: Vrbo.com) and HomeAway France (see: Abritel.fr) as a starting point, she also regularly checks rental listings on local tourist office sites.

Although not pinching pennies, Keith warns that certain indulgences can quickly run up the budget, and cautions against too many meals out. “Go to the markets,” he recommends. “Every town has a market. Have picnic lunches, it doesn’t have to be fancy. The food is just so good, the wine is so good. It doesn’t have to be expensive. You can be very reasonable and eat like royalty.”

Following these guidelines, Keith believes that a couple can live comfortably in Provence for about $2,500 a month (plus transit). “Unless you’re in a big city, you’ll want to move around a bit, to visit the villages,” he concludes.

Now an accomplished writer in his own right, Keith has published two books about living la belle vie in France with Val: One Sip at a Time: Learning to Live in Provence and Are We French Yet? Keith & Val’s Adventures in Provence. Nearing retirement age, the couple may slow down on the business side of things, but have no plans to give up their sunny escape in southern France.

A 7-Day Itinerary for Alluring Occitanie, the Other South of France

5 Things to do in France’s Occitanie Region