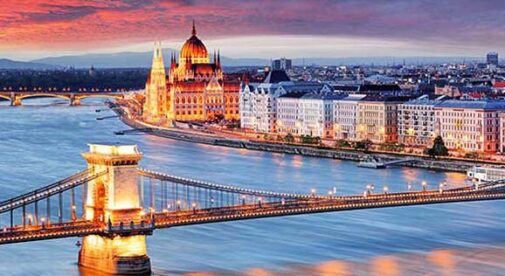 If there’s one thing everyone can agree on, it’s that retired life should be spent lounging on a beach with a book on your chest and a cool drink in your hand. Some choose to spend their time in Mexico, others in Costa Rica or Ecuador. Spain is a popular choice, and Italy, Greece, and the south of France are some favorites as well. The adventurous ones may head to the Far East and find themselves on a beach in Thailand or Cambodia or perhaps even more bravely, India. All of these destinations boast amazing beaches, unforgettable sunsets, and their own locally brewed beer, ice cold. But as romantic as it sounds to laze away the days on a serene, golden-sand surf break for eternity, it can get a little monotonous at times. Sometimes we need a museum or a new restaurant to mix up the routine. An avenue of shopping and street performers and the click-clack of hurrying people is a welcome change. Chaos and car horns rouse us from our reverie, bringing us back down to earth, and this is necessary (if only for a few days), so we can appreciate the silence of that dreamy beach even more than we did before.

That’s why city breaks were invented. Throwing yourself for two or three days into the excitement and intensity of a major city—Mumbai, Bangkok, Phnom Penh, Oaxaca, Paris—shakes things up enough to satisfy the cravings of change, but won’t push you over the edge into the life of anxiety and noise you’ve worked so hard to escape. For those of you spending your days on a Spanish or Italian beach, Barcelona or Rome may be your go-to city break, both of which are fine choices, but consider looking outside the Mediterranean, to a glittering city on the Danube with castles in the sky and bubbling thermal springs underfoot, shopping sprees and culinary masterpieces, a nightlife that sees the light of day, and a music scene that will wake up that beach bum and get you dancing until the lights come on. Budapest is a blast and it’s only a flight away.

If a city break lasts longer than three days, you run the risk of tangling yourself in the gears of “progress” and “development” otherwise known as “stress” and “noise,” two things you broke free from and vowed to never experience again. So only stay in Budapest for three nights and then get out. This gives you plenty of time to see the sights and enjoy a dozen great meals and then be back at your beach before the hustle of a big city jangles your nerves. So, what to do with your three days in Budapest?

First things first, get a lay of the land. On the “Buda” side of the river sitting atop Varhegy (Castle Hill) is the spectacular Varnegyed (Castle Quarter), the oldest part of Budapest and the best view spot in the city. Spend a whole day exploring the cobblestone streets, winding underneath Baroque-style apartment buildings, stopping often to sample kolbasz (Hungarian sausage spiced with paprika), and learning a thing or two about Hungarian history and art at the Budapest Torteneti Muzeum (Budapest History Museum; tickets $4) and the Magyar Nemzeti Galeria (Hungarian National Gallery; tickets $10). Take a break between history lessons and the crowds with a cup of coffee at Oilbar Cafe, hidden in a garden in the center of the tourist trail, or heed the school bell and duck into the underground, limestone-walled Faust Wine Cellar for a Hungarian fine wine and palinka (fruit brandy) tasting. If you commit to the full nine-glass tasting experience ($30), be sure to order a meat and cheese plate too.

Depending on how long you linger in the candle-lit cellar, you may be able to catch the sun going down over the city from Fisherman’s Bastion, but don’t worry if you don’t make it in time, the view of the Orszaghaz (Hungarian parliament building) across the river lit up at night is a stunning display that shouldn’t be missed. Cross the Danube along the chain bridge, grab a scoop of gelato, and do a circle around the massive and gaudy home of Hungary’s humble civil servants and 88 pounds of decorative gold, and then stroll back to your hotel.

Day Two: A Culinary Tour of the City

Now, you could continue on your museum/history tour and spend the whole next day diving even deeper into Hungary’s complicated past, or you could break from your educational obligations and immerse yourself in the more delicious side of Hungarian culture. Considering the many culinary influencers to Hungarian cuisine (Austrian, German, Italian, Turkish, French), and the inexplicably low prices for a gourmet dish, a full day dedicated to sampling everything Budapest has to offer is a no-brainer.

Before getting into what, where, and how often to eat, I should warn that in Hungary, meat plays a star role in dishes. If you are vegetarian, you won’t starve, as there is plenty of lesco (Hungarian ratatouille), gombapaprikas (mushroom stew), and langos (savory doughnuts topped with garlic, sour cream, and cheese) to satisfy you. Just be sure to confirm there isn’t a pork leg mixed in with your soup before you order.

Since your day will revolve around meals, you will most likely try to counteract the calories with walking (if this was not your plan, reconsider, because Hungarian food is rich and Budapest deserves to be explored on foot). So, start your food tour on the “Pest” side of the city and fuel up at Kiskovasz Kezmuves Pekseg with a cup of coffee and kakaos csiga (translated: chocolate snail, but not an actual snail, only a snail-shaped, chocolate-swirled pastry). Down the street and worth a gander is the Magyar Allami Operahaz (Hungarian State Opera House), and just around the corner is St. Stephen’s Basilica, which welcomes anyone from curious visitors who just want to poke their head in to see the pretty Catholic murals to Neoclassical architecture diehards who climb the 364 stairs to the dome and a panorama view of the city. Whichever you choose, don’t linger too long; your chocolate snail won’t sustain you forever. Get down to the Danube and stroll along the promenade while the sun illuminates the ivory-colored stones of Matthias Church across the way. After another pass by the magnificent Orszaghaz, it will be time for a proper breakfast.

Stop somewhere that has an authentic feel and a terrace (Bubo is a great choice for both; $10 plates) and order a French-inspired hollandaise egg dish and fresh-squeezed orange juice, or go all-out with a Hungarian breakfast which includes every edible part of the pig and some toast. Follow with an espresso and another walk, this time to Heroes’ Square, the UNESCO World Heritage grand entrance to Varosliget (City Park), where you can explore the botanical gardens, wander around the lake and Vajdahunyad Castle, and scope out the location of Szechenyi Gyogyfurdo es Uszoda (Szechenyi Thermal Bath) for tomorrow’s spa day.

By lunch time you will be starving; luckily Hungarians don’t mess around for their midday meal (which traditionally consists of three courses), and neither should you. Find yourself another restaurant (Regos Vendeglo offers a stellar lunch menu in a cozy, cool stone-walled basement; $6 fixed price, with dessert) and get ready to eat some goulash. After lunch, don’t give in to the urge to nap; instead have another coffee and go spend a couple of hours at the Terror Haza, and allow the chilling memorial to the victims of the Nazi and Soviet regimes shock you awake.

After a tour through Hungary’s dark history, you may be ready for a cold drink. I recommend Telep-Art Galeria for a cheap pint and a conversation with a local who may have a first-hand account of the distant totalitarian past. Have another drink if you need it, but don’t forget about dinner. Go out on a high note at Kispiac Bisztro (mains $12) and order the half duck and a bottle of wine. Walk it off with a twilight promenade jaunt.

After a long day of sights and bites, you will probably be ready to call it a night and cab back to your hotel, but don’t give in! A day out in Budapest wouldn’t be complete without at least one quick visit to a “ruin bar.” These large, multi-leveled venues that house hip bohemian bars, art exhibits, and live music started popping up in the early 2000s inside dilapidated buildings in the Jewish Quarter and are now some of the most popular attractions in Budapest. Szimpla was the first, and if not the most popular bar in the world, it’s the most fun. Don’t be overwhelmed by the crowds. Push through, order a drink, and watch the chaotic swirl of young people from a balcony above the dance floor. Keep an eye on the time as 6 a.m. can sneak up on you. If that sounds like too much, Hintalo Iszoda is a much more laid-back bar with good drinks and lounge music. There’s something for everyone in Budapest.

Day Three: Rest & Relaxation in the “City of Baths”

Your last day in Budapest will be all about the thermal bath your tired, aching body has been craving. Depending on what you’re looking for, there are a number of options to choose from. The largest and most popular is Szechenyi (tickets $40 with locker and towel), a gorgeous Baroque-Revival-styled medicinal bath complex built in 1913 above two springs in Varosliget (take the metro if you are finished walking on this trip). With 15 indoor pools ranging in temperature from 64 F to 100 F and three giant outdoor pools that seem to be pulled from a Venetian princess’s imagination, you can easily spend a full day soaking, swimming, lounging, imbibing, and then wondering if you should push your flight back a day or two.

For fewer crowds and a more authentic experience, consider Rudas on the “Buda” side of the river (tickets $18 for thermal and wellness spa; bring a towel and sandals, or rent them for a few bucks). This hidden gem was built in the 16th century when the Ottomans were running the show, and this bathhouse looks like it was pulled from the heart of Constantinople. Cavernous and quiet underneath the stained-glass-dimpled dome, Rudas is a true Turkish bath experience. Old men dominate the scene (women are only allowed on Tuesdays in the thermal bath), and rarely a whisper is heard. Float to the hottest corner of the octagon pool where the stream of silky, steaming minerals pours out of the stone walls, and soothe every cell of your being. After a few hours of heaven, find the sauna and enter the third and deepest chamber to feel your bones dehydrate, then exit quickly, pull the rope outside the door, and let the bucket of glacier melt electrify your soul. Finish the experience off in the wellness spa with a rooftop soak and a glass of wine, and watch the lights come on over sparkling Budapest.