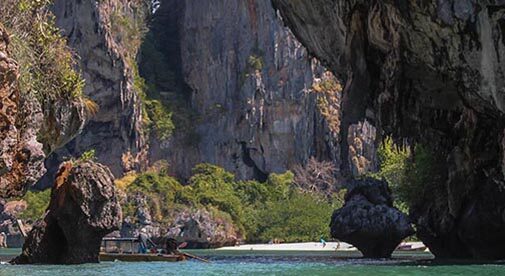 Ao Nang is blessed with beautiful beaches; this one is a 15-minute boat-taxi ride from town. ©Sean Keenan/International Living.

If you want the best tables at the Landmark complex on Noppharat Thara Beach, Ao Nang, they’re the ones beside the lake, sponsored by the Chang beer brand. As Jeff Johnston, Sue Seeming, and I take our seats, we’re informed by a white-shirted waiter that there’s a condition—we have to buy beers to sit at those tables. Well, funny you should mention that…

Jeff is 58 and a sixth-generation Californian whose forefathers paced the sands of Malibu and Huntington before surfboards, celluloid, or even Route 66 made their way to that dreaming strip of scrub country between Point Conception and the Tijuana Slough. He’s the product of a family tradition to search and pioneer, so it shouldn’t come as a surprise that his urge to find a new life drew him to extensive travel in Southeast Asia. After all, California’s about as far west as you can go before you end up in the east.

Romantic reveries aside, there’s a practical aspect to that last claim. We have a tendency to think of Thailand, the Philippines, Vietnam, and their ilk as being unfathomably distant. Actually, from a starting point in southern California, they’re not much farther away than Italy or western France, and travel arrangements between mainland U.S. and Southeast Asia are now as easy and affordable as to Europe.

I love travel, and I wanted to try a new life.

“I’m not running from the U.S.,” Jeff assures me, as we sit in the evening warmth and work on those obligatory beers that secured the table. “I’m always going to keep a foothold in the country. The rent from my home there is what’s keeping me going over here. I haven’t started taking Social Security yet; I’ll leave that for a little while. I just love travel, and I wanted to try a new life. I was in the restaurant business, then law school, then I did electrical project management in the construction business. I’m two years into what I suppose is retirement, but it’s not official.”

Jeff’s first stop in Thailand was in the north of the country, in Udon Ratchathani province, just across a river from Laos. “It was like the Wild West up there, very traditional, very family-oriented, and very different from here in Ao Nang. Ultimately, it wasn’t for me. I’m a beach guy. But I met Sue there, and we got together. She’s from Krabi, about 10 miles from here. She suggested we take a look at her home province. We’ve been here ever since.”

Sitting in the warmth of an Ao Nang evening, with a sea breeze coming in over the white sands, it’s easy to see why Jeff and Sue like the town so much. The sun sets flamboyantly in a gap between the bay’s islands, and the evening light casts amber rays onto the limestone cliffs along the shore, glinting off the smooth water and the gunwales of high-prowed wooden boats.

It’s a wonderful place—just a 15-minute boat ride to the dramatic cliffs, vertical limestone islets, and pristine sands of Railay Beach—and it’s crammed with restaurants, bars, gyms, and parks. Just 20 minutes’ bus ride away are the hospitals, big-box stores, and airport of the regional city, Krabi. International travelers have discovered Ao Nang, and it’s set to become one of the expat hubs of the region.

Jeff and Sue live in a small bungalow in Klong Muang, just north of Ao Nang town. It’s a modern home, with one bedroom, one bathroom, and its own large patio. It’s perfect for their needs. When they first moved in it cost them around $320 a month to rent, but they’ve since negotiated the price down to 8,000 baht—around $255—each month. They don’t skimp on the air conditioning, which hikes their utilities costs up to around $45 a month. Jeff reckons that if they were to use fans instead, they’d have it down to $10.

“My social life revolves around the gym,” Jeff says. “I’d have a lot more people to socialize with if I was interested in hanging out in bars, but that’s not what I’m into. A lot of the people who move here are divers, or climbers coming for the cliffs around Railay. They’re the people to hang out with if you want to be healthy.”

The approach is paying off. Jeff feels he’s in far better shape since moving to Thailand, largely because he’s taking more care of himself and being more active now that he’s not putting in all those hours working that he did in the U.S., and also because fresh, quality produce is so much more affordable in Thailand. “If you cook, you can’t help but be healthy here. And it’s so cheap. Twenty-five to $30 will get you groceries for two people for a week. We only eat out when I’m craving a burger or a pizza. Otherwise we cook at home.”

For the moment, Jeff doesn’t feel the need for health insurance, but if it becomes a condition of his visa, or he feels it’s time to get coverage, he’s had quotes between $60 and $200 a month, depending on the level of care offered. In the meantime, he’s happy to pay for care as needed. “Thai healthcare, and the healthcare system is really good. Also, you can ask at the hospital desk which insurance companies pay out well and are the best value. They’re really helpful.” For now, at least, he and Sue have no plans to move on. They’ve found their spot.