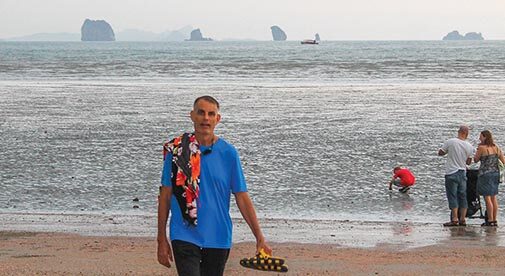 As happy in the mountains as by the sea, Marc Cofer loves to enjoy both in Thailand. ©Sean Keenan/International Living

Marc Cofer definitely doesn’t look 56. We’d arranged to meet at Noppharat Thara beach, at the north end of the Andaman Sea resort of Ao Nang, Thailand. We figured that we’d recognize each other. In the event, it’s Marc who recognizes me, with my winter-white face, dog-eared notebook, and battered camera. It’s just as well that I was so obvious, because the athletic, fresh-faced Marc is not what I was expecting at all.

Alas, apparent youth and vigor are not as valuable in Thailand as they are in the West. Marc laughs and advises anyone considering retirement in the country to embrace the outward signs of age. “Don’t dye your hair if you come here,” he says, explaining the ingrained Thai respect for their elders. “Keep it white, you’ll be revered!”

Marc puts a degree of his vigor down to Jiaogulan leaves, the primary component of a herbal infusion he sells under the name “Immortalitea.” It’s also likely that a low-stress, open-air, healthy-diet lifestyle with a good dose of yoga and exercise thrown in has a lot to do with things, too.

We move across the street to Talay—a quirky multi-level restaurant constructed mostly of bamboo and sunlight. The green papaya salad we have as a starter is a standout example of a dish that’s everywhere in Thailand. It’s made of shredded papaya dressed with ripe tomato, chili, lime, and peanuts, and comes in at around $1.20 a plate. In fact, the whole meal, in which we put away a good five or six plates of food, and drinks, comes out at under $20. This is on a sea-view terrace, in one of Thailand’s most up-and-coming beach resorts.

Back in the U.S., Marc had been in the marketing and promotional end of the IT business. He worked in Silicon Valley for a while before moving to Dallas, Texas. When he took a sabbatical to Nepal in 1997, a love for Asia developed and, over the years, he ended up spending less time in the U.S. and more in Asia. His first long-term stay was in Kathmandu, where he brought in supplemental income by building websites for local businesses.

“I go back to the States every few years, but Thailand is home now,” he says. “It’s an easy place to live. It’s an easy place to travel. If you’re new to travel, in fact, Thailand’s the best place to start. I left Nepal when some friends of mine bought some land over in Railay, a beach area a couple of miles to the south of here. I thought I’d come have a look, and I liked what I found here.”

In fact, Marc divides his time between the beach, in Ao Nang, and the mountains of Chiang Mai. His business, Aum Tea, is based there in the highlands, where the conditions are perfect for growing the vine which provides the leaves and for drying them in the sun outdoors. Marc’s end of things is in marketing and fulfilling orders for the product, which he can do from anywhere with an internet connection. That means that he can move to the beach for months at a time.

Eating out is so affordable it makes no sense to cook.

His rental in Ao Nang, a one-bedroom villa with saltwater pool in an upper middle-class area of the resort, costs him 30,000 baht for three months, which works out as around $370 a month. For Marc’s needs, as a place to spend a season at a time, it’s ideal. “There’s a kitchen, but I don’t really use it. Eating out in Thailand is so affordable that it hardly makes sense to cook.”

Browsing around markets and talking to other expats in Ao Nang certainly supports that. If you do like to cook, fresh fruit and vegetables cost around $1 a pound, seafood straight from the boat works out around $3 a pound, and Western-style supermarkets are stacked with a range of staples that North Americans will recognize. It’s easy to get off the beaten track in Thailand and enjoy the exotic aspects of Asia, but just as importantly, it’s very easy to find the comforts of home, too.

Although Marc is a fit and healthy 56-year-old, he doesn’t claim to be immune to the challenges of age. In fact, he’s had to use the Thai healthcare system on occasion. He’s had treatment here for a kidney complaint and found it world-class. Although he doesn’t consider it cheap, paying around $1,000 a night for critical care in a branch of the highly rated Bangkok Hospital is, by U.S. standards, a bargain.

Further savings can be made on aftercare: “My medications here in Thailand are all out-of-patent, generic drugs. That’s what they tend to prescribe here. They’re not fakes, and they work perfectly. It’s just that the physicians here aren’t incentivized by the pharmaceutical companies to prescribe new products. My medications cost a fraction of what they would in the U.S.”

As the plates are cleared, and we’re wrapping up our meeting, the lanterns of fishing boats bob on the wide bay. “If I have one single message that I want to convey to your readers,” Marc says, becoming more serious than he has been over the course of our meeting, “it’s just to encourage them to come here. We’re encouraged to fear the unknown, but there’s so much to be gained by exploring and embracing the wider world.”