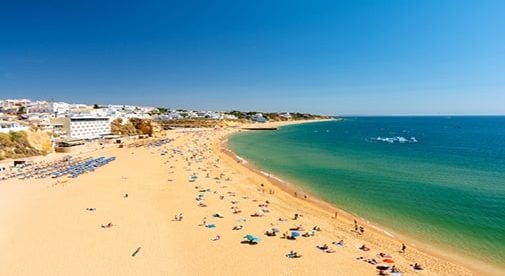 Portugal’s appeal, for most expats, begins with the Algarve. That’s the southern stretch of the country running from craggy Sagres in the west to the low-lying Spanish border in the east. It is a region of wild coastline interspersed with some of the best beaches in the world.

This region of Portugal has earned its reputation among expats by providing a resort feel, while at the same time maintaining the authenticity of this beautiful country. Scores of golf courses, from easy to award-winning, stud the coastline. The dining scene ranges from simple, local food at small cafés in each town to the Michelin-starred Vila Joya in Albufeira. In fact, a total of seven restaurants in the region earned Michelin stars in 2018.

Real estate ranges from simple studios along the coast to villas with sweeping panoramic views in the surrounding hillside towns. It’s easy to drive around, with excellent highways and municipal roads. Let’s take a trip to some of my favorite towns in the Algarve.

Lagos is in the western Algarve, where the beautiful rock formations of Ponta da Piedade and inviting sands lure beach lovers, while a large number of bars, cafés, and restaurants offer food and beverage choices for all. You can have a Portuguese breakfast at a local hangout across from the marina for a couple of dollars, with coffee and thick-sliced local bread toasted and dripping with butter.

Another plus is the professional healthcare. In addition to clinics, the Hospital São Gonçalo de Lagos has experienced medical staff offering inpatient and outpatient care, lab work, imaging, and surgical services at affordable prices.

An impressive new construction project on the waterfront will offer spectacular views of the harbor, but with a commensurate price tag: Average prices are $399,000 and up for two- or three-bedroom apartments. Prices relax a bit just 10 minutes from the town center, in the hills surrounding Lagos, where white, terracotta-topped houses and bougainvillea-draped duplexes suggest low-key suburban life.

About an hour’s drive east of Lagos lies Albufeira, probably the best-known city in the Algarve, with around 15 miles of beaches.

This is a party town, framed in cobbled streets, winding alleys, and Moorish-influenced architecture, with over 100 bars, cafés, and restaurants in the old town alone. The main square, Jardim Público (Public Garden), is any shopper’s fantasy. Lovely boutiques offer arts and crafts, fine jewelry, pottery, woolen goods, and more.

Real estate agent Leonardo Pereira says that in the off season (October to June) you can find a three-bedroom furnished apartment for about $900, plus utilities. It’s possible to secure an eight-month contract in off-peak season. That is important when applying for a four-month visa, as you’re required to show a signed lease.

Continuing east is Tavira, one of the prettiest little cities I came across. The town straddles the Gilão River and features whitewashed buildings, Roman ruins, and jacaranda and oleander blossoms everywhere. Touches like latticework doors with knockers in the shape of hands (a tradition passed on by the Moors) add to the charm.

I hopped on a ferry to Ilha Tavira, one of the finest beaches in the Algarve. To my surprise, there were not only cafés, but a number of good restaurants. Vendors sold handicrafts at tables on the way to the wooden boardwalk, which leads to a stretch of pristine sand.

There’s no way around the real estate situation here: The odds are strongly against finding an affordable house to rent. And it’s hard to find one to buy for under $200,000. But if you’re willing and able to spend a bit more, you might have luck in an urbanização, a designated community usually surrounding small cities, consisting of apartment complexes.