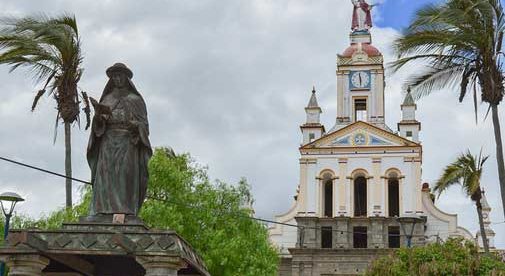 When I moved to Ecuador almost four years ago, I did not speak a word of Spanish. Well, I could say “good morning,” “good afternoon” and “good evening,” but that was pretty much the extent of it. I had decided before I moved that learning Spanish was very important to me, in order to better integrate into the culture here.

Ten days after I arrived, I enrolled in a fairly intensive Spanish immersion program. It was three days a week, four hours a day—no English allowed. I’m not going to sugar coat it…it was a challenge. There was a lot of charades going on for the first few weeks. But honestly, I think all those charades made the words stick better.

I had heard from someone that there was a young lady who worked in a local store that wanted to learn English. So I thought what a great way to improve my Spanish. I can teach her English, and practice my Spanish. We met in her store a few times a week, and then relocated to her house in the evenings. She was married with two little kids, so I learned a lot of little kid jargon. Before I knew it, I was joining her at her husband’s basketball games, and spending time with the kids.

Learning Spanish was a big learning curve, but before I knew it I was able to communicate fairly well. I was able to shop, exchange pleasantries, and even argue if needed. I went to school on and off for the first year, using the time off to actually practice what I had learned in school. (Spanish classes run about $8 to $10 per hour for an individual lesson, and $6.50 to $8 for a group lesson.)

I did, however, have a few blunders. One day, I asked a contractor working at my house if he would like a “child” in his drink instead of “ice” (hijo vs hielo), and I was constantly asking for “Thursdays” instead of “eggs” (jueves vs juevos). Mostly I just got funny looks, realized that I said something wrong and tried to correct it.

After a year of Spanish classes, I decided to undertake a home-stay in order to practice my Spanish. I had met a family who lived outside the city of Cayambe, high in the mountains. They were a fairly poor farming family, but generous people. The dad and kids all worked or went to school during the day, so I spent most of my time with Carmita, the mom. Every morning we worked the cows, cleaned the guinea pig cages, and did other farm chores. The whole time we would be chatting away in Spanish. It was a very interesting experience and really did help me learn more Spanish.

I try to incorporate several techniques into learning. I often find that I just like to venture out on my own and find people to talk to in Spanish, whether it is on the bus or at a restaurant. Also, I often tune the TV or radio into Spanish to listen to in the background. But, most important is that I fortunately have friends who find learning the language a very important quality, and we are constantly encouraging each other, sometimes even writing our emails to each other in Spanish.

I feel so much more confident and happy now that I am able to communicate. Like with anything in life, there is always room for improvement, so after nearly four years, I have gone back to school again. I find now that since I understand the language better, everything that I am learning at school is clicking so much faster. This time around has become very rewarding for me, which in return keeps me motivated to continue working up that learning curve.