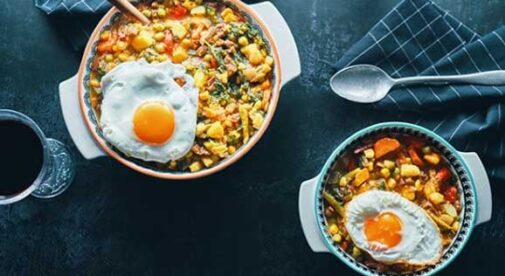 Traditional Chilean dishes reflect the country’s many cultural influences, such as Indigenous Mapuche culture and European cuisines, with hints of Arabic culture mixed in. Typical dishes from Chile feature unique species of fish and clams. Many recipes use beans, pumpkin, and corn as staple ingredients. As well, traditional Chilean food tends to include rich stews made of chicken, beef, and seafood.

Some people have described Chilean cuisine as similar to Mediterranean cuisine, due to the similar climate. The influence of Spanish settlers who brought their cattle, chickens, and wheat to the region is undeniable. As well, Chilean traditional dishes have distinctly native ingredients such as potatoes. They also use creative methods of cooking such as hot stones, earth ovens, and meat curing.

Chile’s cuisine can be separated into three regions. The northern region is known for its barbecued and cured meats like charqui and asado, and its hardy stews such as the caldillo de congrio. The central valley and coastal areas are known for their tasty soups, deserts, and street foods, including empanadas and Indigenous dishes like humitas. The south of Chile is known for its Indigenous influence on food, including spices like merken. It also has delicious cake recipes brought over by German settlers during colonial times.

Here are some of the best traditional Chilean dishes ready for you to discover:

In the province of Chacabuco, Chileans will often prepare a dish called cazuela nogada. This tasty stew is made of chicken cooked in a walnut sauce and includes potatoes, onions, and beans. Cazuela nogada is based on a traditional Indigenous recipe. It is often eaten by people who want to recover from long travel, celebrations, or lovesickness.

Porotos granados is a delicious bean stew and distinctly Chilean. It is made with fresh beans, corn, pumpkin, garlic, onion, and basil. Typically, this dish is eaten during the summer months. There are a few variations of the recipe which use mashed corn called mazamorra, or whole corn called pilco. The choice of ingredients can change the consistency of the stew.

Sopaipillas are a type of pumpkin scone or bread, which are typically circular and flat in shape.  Also called sopaipa, their ingredients include pumpkin, flour, lard, and salt. The recipe is prepared by deep-frying the raw dough. Sopaipillas were brought to Chile by the Spanish during colonial times. They represent the Arabic influence in Spain’s cuisine. This dish can be found in the southern and central regions of the country and is usually sold by street food vendors. An alternative version of the sopaipilla is dipped in a dark-brown sugar called chancaca and prepared with orange peel, clove, and potato flour.

Malaya, or rose meat, is served hot or cold. It is typically prepared with several spices such as pepper, parsley, cumin, and oregano. The meat is wrapped around a hard-boiled egg before cooking. Rose meat is usually sourced from young beef and cooked slowly. It is then served with mashed potatoes and a typical Chilean salad of julienned tomatoes and onions.

Caldillo de congrio is an eel soup made popular in Isla Negra. This dish is available year-round and is mainly found in central Chile and along the coast. The soup is usually served in a clay bowl and has local seafood such as clams, mussels, and the main ingredient, conger eel.

Chorillana is very popular in the coastal city of Valparaiso. This hardy breakfast is made of fried onions, spicy sausage, beef strips, and French fries. The meal is then topped with two fried eggs. Chorillana is typically served on weekends and eaten before a day of climbing the hills and mountains of the area.

Charqui de caballo is made of dried and salted cured horsemeat. The tradition was brought to Chile by the Spanish when they settled in South America. In colonial times, Chileans traditionally prepared charqui by using the oldest horses they had. This was useful during the winter months when animals were too thin to kill and eat.

In the northern part of Chile, pataska is a delicious spicy stew served during festivals and celebrations. This stew is made of a mix of charqui (cured horse meat), mote, and potatoes. In Atacama, pataska is typically prepared in honor of the “Pachamama,” an Indigenous word from the Quechua languages which translates to Mother Earth. It is served to celebrate the harvest and cattle.

Pollo al barro translates to “beggar’s chicken” and is also called “chicken in the mud.” This popular dish is prepared by marinating a whole chicken in a rub of garlic salt and letting it sit until the flavor is absorbed by the meat. The chicken is then covered with mud and cooked in an earth oven. The cooking process is long, but the resulting juicy and tender meat is worth the effort. Pollo al barro is typically served with a side of Chilean tomato salad.

Curanto en hoyo is a seafood dish, typically made with clams, fish, and potatoes. The dish is prepared by wrapping the ingredients with gunnera leaves which are similar to rhubarb. The wrapped package is then covered with hot stones, heated on a fire beforehand, and covered with dirt to allow the dish to cook. The traditional recipe varies from family to family because the dish is a collaborative event used to celebrate mingas or community work. Normally, every participant will bring one ingredient to add to the dish. A minga is a form of communal or cooperative labor.

Humitas are one of the oldest dishes from Chile. This mashed corn wrap is also popular in neighboring Peru and Ecuador. Corn is one of the most abundant ingredients in South America and many of Chile’s recipes reflect this. In the summer, the corn husks collected from the harvest are filled with a mixture of corn pulp, garlic, onion, and herbs. The dish is then boiled and served with fresh tomatoes and a dash of sugar. Humitas are a popular meal for lunch or dinner.

Because Chile is located along the coast of South America, seafood is easily accessible and has become central to many of its dishes. Sopa de mariscos, or seafood soup, is made from whatever locally sourced seafood is available. Typically, the recipe calls for mussels, onions, and garlic. Some regions add bread, milk, and herbs to the recipe.

Valdiviano is a meat and vegetable soup made popular in Santiago, the capital city. It can also be found in the south of Chile. This soup is made of meat, typically beef, and a mix of vegetables. Onions are always used, and the soup is served with an egg on top. This hot meal is a great way to warm up during the winter months.

Churrasco is a Chilean steak sandwich made with thinly sliced beef steak. It is cooked on a high-temperature grill which seers the meat quickly. The churrasco is then placed in a Chilean bread called amasado and topped with tomato, avocado, and mayonnaise. A must-try is the churrasco a lo pobre, prepared with a fried egg, caramelized onions, and French fries.

This thick stew is made with roast beef, squash, peas, corn, and potatoes. The ingredients are slow cooked and occasionally include pumpkin or llama meat. Charquican is a favorite among Chileans for breakfast and is sometimes served with a fried egg. It is also found in Andean regions such as Bolivia, Peru, and Argentina with slight variations on the recipe.

Made from fresh ocean fish, Chile’s version of the sea bass dish has become an international favorite. In Chile, sea bass is known as “Patagonian toothfish,” which doesn’t sound as appetizing. This fish is considered high-end and very popular in some of the more expensive restaurants. Chilean sea bass is white, flaky, buttery, and tastes like cod. There are many ways to prepare it, but typically it tends to be well spiced and pan-seared, baked, or grilled. Serving it with onion and garlic is a popular option in Chile.

If you haven’t figured it out yet, traditional Chilean foods largely focus on meat. Pernil is a mouth-watering, slow-cooked, marinated pork shoulder or leg. This dish is flavored with pepper, salt, oregano, and sofrito. During Christmas celebrations, you’ll often find Chilean families serving pernil to their guests. The meat is usually tender and savory, and typically served with rice and peas.

Ceviche is popular across many nations in Latin America but is most frequently found in Peru and Chile. It is normally made with raw, locally sourced fish cubes and marinated in lemon juice which “cooks” the meat. Chilean ceviche is served with onion, garlic, olive oil, and red peppers. Cilantro, smoked chili pepper (merken), salt, and cumin are then added.

Pisco sour is a typically Chilean drink made with pisco, a high-alcohol-content brandy. Citrus juice, such as lime, and a sweet syrup are mixed in. The drink is served on ice. Although the pisco sour was originally created in Peru, Chile’s version, which doesn’t include the egg whites, is the most popularized.

Mote is a popular drink among Chileans. It is made of boiled hominy, a food made of dried corn kernels treated with an alkali liquid. I found two popular types of mote in Chile. Motemei, or mote de maiz, is prepared by boiling the corn hominy over a wood stove. The mixture is then salted and served with water and sugar. Mote con huesillos, a wheat-based hominy is common during the summer. This version is made with rehydrated peaches, wheat, water, and a brown sugar called chancaca.

Like many other Latin countries, Chile offers appetizing street foods such as empanadas, though Chilean empanadas are bigger and tend to be baked. You will also experience traditional Indigenous foods like humitas which are similar to tamales. The breads accompanying your meals will likely be one of three options: Spanish bread, Chilean flat bread, or tortillas.

Clearly, beef and poultry are important meats in Chilean cuisine. In fact, they are considered essential to every Chilean’s lunch and dinner. That said, lamb and goat are also popular options in the Patagonian region of the country and are worth trying.

An important point of interest is that Chile is internationally known for its amazing red wines. Expats and visitors alike will find that a bottle of Chilean wine costs a fraction of what it would in North America or Europe. Consider pairing local wines with the dishes listed here. Many restauranteurs pride themselves on helping their guests navigate these options.