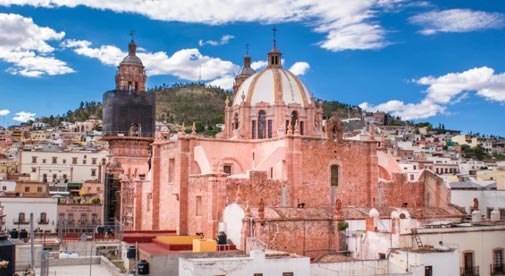 If you know anything about colonial Mexico, you’ve probably heard of San Miguel and Guanajuato. But Central Mexico is dotted with numerous other flat-out gorgeous cities that tourists—and even expats—rarely visit. These gems are virtually unknown outside of Mexico. They offer expansive pedestrian areas, plazas, courtyards, fountains, benches, and stone or adobe homes. I’ve often felt that Public Works officials in other countries should hire Mexican urban planners, because the layout and landscaping of Mexican central cities are so beautifully well-designed and user-friendly.

The three cities I’ll describe, Zacatecas, Morelia, and Pátzcuaro, are all located on the Mexican altiplano, which means spring like temperatures during the day and sweaters and jackets at night.

“Are you sure we’re not in Europe?” I said to Barry, my husband, as we sipped our cappuccino in a cafe with high vaulted ceilings and stone arcs. “We can’t be,” he said. “The coffee is less than a dollar.”

If you want Europe without the crowds, long flights or cost, try Zacatecas, a city of 150,000 in the north central highlands of Mexico and a UNESCO World Heritage site. Named for the Zacateco people of the grasslands, the town is so appealing that it should be teeming with visitors, but we saw few other foreigners. It’s tranquilo and offers something for every taste: colonial architecture that makes you think you’re in Seville, coffee shops if you’re a people-watcher, a Mediterranean restaurant and an Italian trattoria if you want international cuisine, a museum with modern European art, a hill to climb for hikers, and affordable prices. We paid $35 a night for our hotel, with morning coffee, a spacious balcony, and a view.

You can spend a lot of time just wandering aimlessly along the small streets and colorful alleys. But when you want to do something more active, you can hike up the Cerro de la Bufa in about 40 minutes. Alternatively, ride the teleferico (cable car) from the Cerro del Grillo to the Cerro de la Bufa, where you’ll find several statues, including one of Pancho Villa, who fought a battle in the city, and a small white church enclosed in a square with arcades around it. Sitting in the church, we watched a mother and daughter in the pew in front of us spontaneously break into song.

You can visit the defunct silver mine, Mina El Edén, which has an underground train that passes unique rock formations, displays of mineral deposits, and antique mining machinery. Or one of the many museums, which are often located in beautifully restored former convents or private homes. My favorite was the Pedro Coronel Museum, housed in a former prison, which included paintings by many modern artists including Picasso, Kandinsky, Braque, Chagall, Dalí, and Miró.

But Zacatecas is the kind of city where you don’t have to “do” anything. One afternoon I got a kick out of walking slalom-style in and out of the pink cantarra (stone) arches of the El Cubo Aqueduct, which is particularly beautiful at sunset.

With a population of 600,000, Morelia, another UNESCO World Heritage site, is the biggest of the three cities, and has the largest centro colonial of any city in Mexico. Walking around Morelia feels like a walk back in time, with its 16th-century classic Spanish Renaissance buildings of pink stone. We were surprised that so many people we met spoke English, since, once again, we saw virtually no other foreigners.

The first day Barry and I took an hour-long tour bus showing us the historic landmarks of the city. While we are not particularly “tour” types, we find these short tours are a good introduction to a city and help us know where else we want to revisit on foot. This is yet another city filled with squares, parks, pedestrian areas, and tree-lined streets.

The prominent Baroque-style cathedral has twin towers over 200 feet high and took over 100 years to build. It houses a massive German-made organ, which was the largest organ in all of Latin America when it was installed in the early 1900s.

Like Zacatecas, Morelia has an aqueduct, this one dating back 300 years, and over a mile long. Of course we had to walk the length of it. (Unfortunately, unlike many cities with ancient walls, you can’t actually walk ON the aqueduct). The back of a 50-peso Mexican bill shows the Morelia aqueduct.

Then there’s the area we nicknamed “Jesus and Mary Street,” or Calle 20 de noviembre, a street lined with small shops selling religious icons. In one of them, I was trying cagily to snap a photo of the tiny, whispery owner. But she seemed to be out of sight most of the time, until she finally came into view and shook her head vigorously. No photos. We both laughed. She knew my number.

One afternoon we happened upon the Conservatorio de las Rosas, a former convent turned music school, where, as we strolled along the cloistered passageways, we heard strains of classical music. Following the sounds, we found a theater-style room with listeners watching violinist students practicing and getting feedback from their instructor. We later learned this institute was the first music conservatory in the Americas.

Classical wasn’t the only kind of music we heard. Each day we were in Morelia we heard different performers on the street. And our first evening, people of all ages were dancing to a mariachi band in a square near our hotel, so we joined them.

Morelia is flat, so you couldn’t walk up to a viewpoint, but we did enjoy having drinks on the upstairs terrace of a bar on the plaza, with a view of the surrounding mountains.

Unlike Morelia and Zacatecas, Pátzcuaro is not a UNESCO World Heritage site, but it is one of Mexico’s government-anointed, tourist-friendly pueblos mágicos, a lovely, picturesque town of about 80,000. Pátzcuaro is only 35 miles from Morelia, so you can easily see both on the same visit.

Pátzcuaro’s homes are uniformly white, made of adobe and/or wood, with red tiled roofs and balconies filled with flower boxes. As you walk along its cobblestone streets, you’ll see lots of churches, porticos, arches, and courtyards dating back to colonial times.

The town is known for its crafts and is the market hub of the region, with nearby villagers bringing their specialized arts and crafts such as textiles, copper ware, black pottery, musical instruments, woodwork, and baskets.

Pátzcuaro sits on the southern edge of its eponymous lake, which has a number of islands. The main one people visit is called Janitzio, which can only be reached by boats that run regularly back and forth from the pier down from the center of town. You’ll climb up a spiral staircase inside the statue of José María Morelos, a hero of Mexico’s independence, to reach the island’s highest point. As you climb, you’ll see the life of Morelos depicted in dramatic murals on the walls. At the top, you can look through peepholes in the giant raised fist of Morelos, to see views of the lake and islands.

Pátzcuaro is famous for its Día de Los Muertos (Day of the Dead) celebrations. Preparations begin long before the official day, November 2. People bring flowers and offerings to the churches and clean and repair the cemeteries. Sugar skulls, tamales, and alcoholic spirits are lovingly placed in altars all over town. Festivities continue to midnight on November 2, which begins the velación de los difuntos (wake for the deceased) when people gather in local cemeteries and chant prayers. When dawn comes, a collection of food is taken for the parish priest and most people go to mass.

My experience of Day of the Dead in Mexico is that the celebration is very different from the way in which most Western nations view death. It is not a sad, tragic day; it is a time to reconnect with loved ones. For me, it was very powerful and healing.

Whichever of these cities you choose to visit, I believe you’ll have the same experience we did: delight at the kindness and friendliness of the people, pleasure in the inviting environments, and gratitude at the sheer sensual delight that defines Mexico.