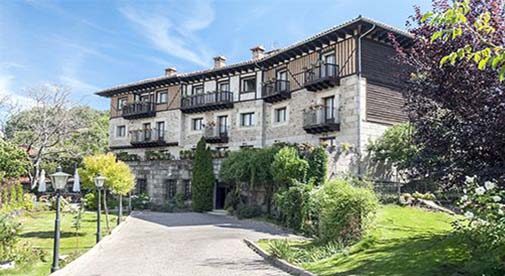 The ancient stone and half-timber houses of La Alberca are a fine backdrop for learning. ©Tomas Guardia Bencomo/iStock.

After living in Spain for a year, I was impatient to ramp up my Spanish language skills. I’d hit a point where I could handle all the basic transactions of life, as long as the replies to my questions were short and simple, but my ambitions in Spain go beyond the basic stuff. I really wanted to delve into life here, and that meant getting a grip on the language.

I really wanted to delve into life here.

Despite private lessons, smartphone apps, and language exchanges with Spaniards learning English, I kept getting lost in the rapid-fire conversations among my Spanish friends. I longed to fully participate in discussions about art, politics, and broken hearts.

I decided it was time to sink or swim, so I signed up for Pueblo Español, an eight-day residential Spanish-language immersion program.

At a welcome luncheon for students in Madrid, we met Beth, who would be our leader and program director for the next week. Beth is an upbeat American from Minnesota who lives in Madrid and is fluent in Spanish. Although she teaches Spanish and English, the Pueblo Español program offers no grammar lessons or classroom sessions. Our week would be packed with conversations, games, projects, presentations, tours, amateur theater, and delicious gourmet meals.

My fellow students included Hilary, a retired librarian from Washington, D.C.; Jane, a nurse from Manchester, U.K.; Melvin, a retiree who was born in Britain but has lived in the U.S. since his college days; Patricia, a Canadian IT professor who loves walking the Camino de Santiago; Roy, a retired British film and television producer remodeling a house in southern Spain; and Sal, who was born in Italy but was raised in New York and lived in the California wine country before retiring to Barcelona.

We boarded a bus in Madrid for a four-hour ride to a resort in the medieval village of La Alberca, near Salamanca. Besides my fellow students, passengers included some of the Spanish volunteers who would serve as our conversation partners, coaches, and cheerleaders during the immersion. The Pueblo Español method matches an equal number of students and native-Spanish-speaking volunteers for nonstop communication. In fact, our first one-to-one conversations began on the bus.

The volunteers are carefully selected for diversity of accents, region of origin, age, and gender. Ours were well-educated, well-traveled professionals including Ana, a psychologist; Manuel, a dapper retired teacher from Galicia (that little piece of Spain above Portugal); Maite, a nurse; Emilio, a retired human resources executive; and Jana, a young dentist from Madrid. After about an hour, the bus stopped in El Escorial to pick up Pepe, a lively 87-year-old illustrator who would prove to be the life of our party.

When we arrived, we met the remaining volunteers: Marixa, a marketing executive from Bilbao, and Isabel, from Zamora, who is an administrator in the lending department of Spain’s biggest bank. After a lunch of steak, soup, and salad (with wine), a siesta, and a tour of the hotel and its extensive grounds, the games began. Beth made it fun to learn each other’s names, exercise our memories, and use body language. She assured us that frustration is normal and urged us to persist in spite of it. All this was in Spanish, of course. I struggled to put together sentences, and I didn’t understand much of what anyone said.

After a generous buffet breakfast, the day started out with three one-to-one conversations back-to-back. First up was Isabel, who spoke slowly because she had previously been a student at Pueblo Inglés, the eight-day English immersion offered by the same company. She understood how challenging total immersion can be.

My next session was with Jana, the young dentist. She spoke clearly and offered gentle corrections. Finally, I spent an hour talking with Pepe. His soft, rapid speech was harder to understand, but his tales of building a career and raising a family under the Franco dictatorship were fascinating.

Next, Beth informed us that each student would give a five-minute oral presentation in Spanish at the end of the week and offered guidelines. The afternoon was filled with group activities. After a funny skit, a presentation about Pepe’s recent retrospective, and another fabulous dinner, I headed for bed exhausted with my brain overflowing, feeling like I could not possibly process any more information.

I got a good night’s sleep and started the day with a positive attitude. I decided to stress less, listen, and ask questions. If I didn’t understand everything, it was OK.

Beth took us on a morning tour of La Alberca, the first village in Spain to be declared a national heritage site. Narrow cobblestone streets meander between ancient stone and half-timber houses where flowers spill from wooden balconies. Our tour ended at the historic cathedral. Since it was Sunday, we had the good luck to see a procession of the men from the town, in long black capes, following a musician playing a drum and flute at the same time.

I had so much fun, I forgot my frustration.

We followed Beth down a narrow street and into a humble stone doorway. We stepped into a cool, dark bodega where wine and Spanish delicacies awaited us. We sipped and sampled cheeses, sausages, and the coveted, local jamón de bellota. We learned the art of slicing this salted, acorn-fed pork off the bone. I surprised myself by drinking wine from the bota, a leather canteen, without spilling a drop. I had so much fun, I forgot my frustration.

As we walked back to our casitas after dinner, Hilary said, “Solamente tres dias?” (Only three days?) I laughed. We’d packed so much into three short days, it felt like we’d been in immersion for a month.

I woke up feeling overwhelmed and discouraged. I wanted to quit. I’d learned enough to realize the enormity of what I didn’t know about Spanish. At 71 years old, I considered the possibility that my brain was incapable of learning a new language, but Beth’s advice echoed in my memory. I would persist!

After plenty of coffee and a cooked-to-order omelet, I worked on my presentation in one-to-one sessions with Ana and Isabel. Their compassionate encouragement gave me the courage, not only to continue, but to tackle the dreaded “telephone conversation.”

Emilio was my partner and coach. We agreed on a role play. He would be a bookstore owner, and I would call looking for publications about South American author Gabriel García Márquez. I swallowed my terror and dialed from my room to his room. He answered cheerfully and tried to be helpful. I felt like I did pretty well, although I was sure I didn’t understand everything. In the feedback afterwards, I realized that, in fact, I’d understood every word.

Later Beth told me that Emilio had complimented my speaking ability. Apparently, I was speaking and comprehending better than I thought.

Later that day, I joined a teleconference. Marixa played the editor of a travel guidebook. Jane, Sal, and I tried to get her to include our cities in her publication. I understood all her questions and was able to respond. Afterward, Marixa and Beth both complimented me. These successes raised my spirits.

That night, witches paid a visit, and I was one of them. Beth conjured the ancient Galician ritual of queimada. She poured some Spanish fire-water into a cauldron with sugar, lemon peel, coffee beans, and cinnamon. She set the mixture on fire. As the brew burned with blue flames, three cackling witches (played by Ana, Manuel, and me) crept into the room and spoke incantations to banish evil from our lives. When the flames were extinguished, everyone quaffed the potion, declaring that it would burn away all of our frustration and discouragement. I retired to my room feeling fabulous.

I woke up feeling empowered. After a morning of working on our presentations in one-to-one sessions, we spent the afternoon listening to a handsome Spanish-speaking tour guide as we toured the venerable city of Salamanca, home to one of the oldest universities in Europe. We marveled at the spectacular Plaza Mayor and shared dinner in a local restaurant.

I relaxed into the adventure. Although I was still translating in my head and making plenty of mistakes, I enjoyed the process. In the morning, I practiced my presentation in one-to-one conversations. Then we got a fascinating look at rural life in old Spain by visiting a traditional house converted into a museum. After lunch in a rustic restaurant, the afternoon was filled with games, one-to-one conversation, and a group discussion.

After one last one-to-one, we gave our presentations. All the students performed admirably and fielded questions well. Our audience of volunteers applauded mightily. At lunch, giddy with relief and the satisfaction of having met the challenge, I poured myself an especially generous glass of wine.

That afternoon, Beth assigned a small group of students and volunteers (including me) to create a skit summarizing the events of our week…and perform it for the others that evening. The pressure was on. Everyone was creative and funny. It was a huge hit!

Our laughter continued into the evening as we toasted each other at a medieval banquet and then adjourned to a celebratory party in the bar. Despite the fact that our luggage had to be in the lobby by nine the next morning, we danced, drank, and chatted in Spanish until well past 2 a.m.

The morning was filled with a heartfelt, and sometimes tearful, closing ceremony. After our final lunch, we shared goodbyes and promises to stay in touch as we boarded the bus for Madrid.

Immediately after the immersion, I felt like my brain was on overload. But within a couple of weeks, I realized that my Spanish was definitely much better. My confidence about speaking had increased tremendously. Am I fluent in Spanish now? No, and I realize I’ll need a couple more years to reach that goal. But that’s not the point.

The point is that I had the courage to take on, and accomplish, a formidable challenge that gave my aging brain an incredible workout. I made new friends from my adopted country and other countries. Across borders, genders, and generations, we laughed, cried, and supported each other as we worked toward a common goal. Together, we created community and a week of peace on earth in one little corner of the world. And that’s a lot.

The Easy Way to Learn Spanish…Before You Move Overseas