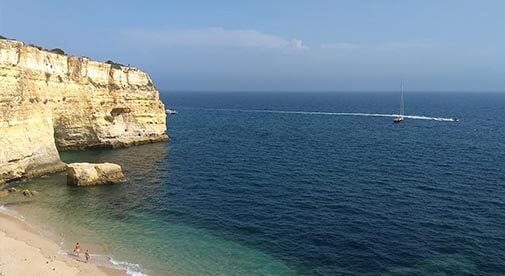 Rick Steffens, a professional musician, and his wife, Victoria, who worked as an intensive care unit nurse, always knew they’d retire overseas. “We love traveling, but we couldn’t afford to keep our house in California and travel at the same time,” Rick explains. Now, retired on the south coast of Portugal, between the Algarve’s dramatic beaches and the almond groves of the Monchique mountain range, they’ve found their ideal location to settle in.

Aside from the Algarve’s natural charms, Rick and Victoria feel that the Portuguese way of life suits them better than California’s. “We felt like there’s sometimes a bit of a ‘What shall we do with the old people? Let’s shove them into a retirement home’ mentality among America’s younger generation,” Victoria says. “Although some of these places are gorgeous and organize lots of activities, we didn’t want to live in a retirement community. We don’t like bowling or bingo; we prefer a more active lifestyle with pastime pursuits of our own choosing.

“To tell you the truth, Portugal wasn’t even on our radar initially,” she adds. The couple actually planned to retire in Panama. However, after six months of living there, they decided it wasn’t the country for them. “We thought we could just drive from Central to South America and travel around the continent easily, but that wasn’t the case. At border checks we were confronted by officials with machine guns, which burst our bubble a bit.”

They then rented a house in Ecuador and spent a month traveling through Colombia. “Everywhere we went, people were raving about how wonderful Portugal is. They all told us the same thing: You need to check it out. After doing some research, we decided to give it a go. We’d already visited Europe four times before on our travels and loved it,” Victoria explains. In 2015 they arrived in the north of the Portugal, where they lived for a year.

“Becoming a Portuguese resident wasn’t hard. It took a bit of paperwork, but all the necessary information can be found online. You don’t need a lawyer.” However, the weather in the north of Portugal was too cold and rainy, so they moved farther south, to the Algarve. “Traveling light made this move easier. We brought only four suitcases with us, as we became minimalists when retiring.”

Rick and Victoria claim they’ve done more in their five years in Portugal than in their entire time in the U.S. “We regularly go out for dinner, go dancing, and listen to live music. Also, we go on a lot of walks, from a stroll along the beach to a countryside hike or a cliff trail,” says Victoria. “Compared to California, where people sit at home or go gambling, here the older generation seems more energetic. A bar nearby plays songs of our time and everybody on the dance floor has grey hair!” Through music, they easily became part of the community. Rick plays the bass and performs all over the Algarve, together with American, British, and Portuguese jazz musicians.

One of Portugal’s main advantages, Rick says, is that it’s very affordable, from daily groceries to property. “We currently rent a house with roof terrace and ocean view in Ferragudo for €500 ($577) a month. Only a 10-minute walk from our doorstep, there are five different beaches to choose from. In the States, a property like that would be quadruple the price at least. Same for medical insurance: in the U.S., we’d pay $400 per month, per person. Here, we’ve found great healthcare insurance for both of us for €150 ($173) monthly.”

Their favorite thing about living in the Algarve, though, isn’t the lower cost of living. It’s the friendliness of the people. “We live in a little Portuguese neighborhood where everyone has welcomed us with open arms. They invite us to parties and encourage us to learn Portuguese. The language is definitely a challenge but living among the Portuguese people helps—if we’d lived among other English-speaking expats, we’d probably get lazy.”

Another thing they love is the Portuguese seafood, especially bacalhau (dried and salted cod). “If you don’t like fish, then Portugal is probably not the right country for you,” Rick admits. It’s one good reason to do some on-site research. Rick and Victoria can’t stress enough the importance of coming over and checking a destination out before you commit. “You have to test the waters first,” Victoria says. “If you want to live in a new country, make sure it’s the right place for you. See if you like the culture and rent for a while before you buy.”

Rick and Victoria have no regrets at all about their move to the Algarve. “People asked us how we could possibly leave our grandchildren behind. Well, we spent lots of time with them when they were young, but now one’s at college and the other is in high school. At that age they want to hang out with their friends, not with grandma and grandpa,” says Rick. “After a few years living in Portugal, our eldest son asked: ‘So when are you going to get real and come home again?’ To which I replied, ‘We are home.’”