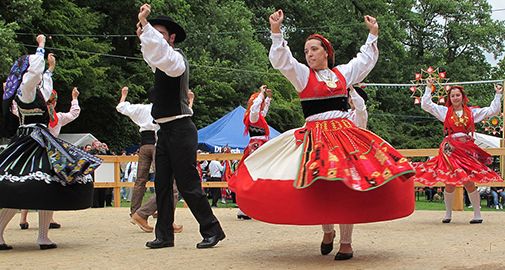 The women wear long-sleeved white blouses and fitted embroidered vests paired with vividly colored skirts and aprons. I wonder how they will keep their backless, black patent, low-heeled shoes on their feet when the music starts. The dancers position themselves politely, almost shyly, around the perimeter of the dance floor, with little or no chatting among them. I see a variety of headgear: some dancers wear a large scarf tied loosely at the base of the neck, trailing down the back almost to waist level. Some have opted for a straw, sombrero-type of affair. Some—who apparently want to have it all—sport both.

Nearby stands an assortment of unassuming men, ranging in age, like the women, from perhaps late teens to seventies. They too wear a uniform of sorts, but also exhibit individualism. White shirts are worn with or without a vest or a jacket. A few have a black scarf/cape unit slung over one shoulder. A wide black or red waistband tops simple black pants. Most have chosen to wear medium-brimmed black felt hats, but some are bare-headed. One wears what looks like a traditional Panama hat.

The small band of beaming musicians goes into action. Instantly, retiring damsels turn coquettish, twirling madly, and smiling broadly at their partners. The men seem suddenly taller, proud, and confident as they spin their partners in dizzying fashion to the upbeat, polka-like strains of music. The dancers have almost constant contact, touching hands, brushing elbows, arms about the waist, a square dance on steroids.

Welcome to Ranchos Folclóricos, a cultural form originating in Portugal’s rural areas and farming communities. These dances, performed by couples or as groups usually during holidays and special events—think religious feast or harvest festival—vary regionally, as do the costumes. There is much overlap and interweaving regionally you’ll find there’s no definitive, last word on dances, costumes, or accompaniments on this subject (a very typical Portuguese mindset, actually). Here’s a look at some of the components of this jubilant and cherished form of expression.

The vira, (meaning “turn”) comes from the Minho region in the north. Sometimes compared to the waltz, here men and women form a circle which they revolve around, with their hands in the air. Partners not only continuously change but circle each other as well.

The chula also originated in the Minho (upper Douro) part of the country and is said to have greatly influenced samba rhythms of Brazil.

The fandango is downright fascinating. While generally thought of as Spanish, the dance seems to be of Moorish or even Phoenician origin. Especially popular in the Ribatejo region, north of Lisbon, this is a dance for couples which is performed with two men or two women, and although rarely, two women. Participants face each other, but never touch. The story told by the dancers may be one of courtship or one of competition, with each dancer “responding” more elaborately to the other’s steps. (If you see a connection here with flamenco, you’re onto something: fandango is a form of the latter, with regional variation, while flamenco is traditionally associated with the Andalusia region of Spain.)

From the beach town of Nazaré comes Ta-mar, an alternating-rhythm dance where men wear plaid shirts and pants and knitted stocking caps, appropriate for the town’s seafaring heritage.

Once again from the Douro region, the Mirandese Pauliteiros is unique as it’s a style of warrior-dance, not common in most Portuguese folk dance. The name derives from the word paulito, meaning “small stick.” Here, men dance together with synchronized footwork using wooden sticks which they hit together to the music’s rhythm. Neighboring Spain has a similar style of dance, Danza de Palos.

Speaking of Spain, another similarity between the countries is the use of castenholas in Portugal, castanets across the border. Absent these, often fingers snap in time to the music.

Think bagpipes are only on the British Isles? Think again. The Gaita-de-fole de Coimbra is a type of centuries-old Iberian bagpipe and one of the most important traditional music instruments in the Beira Litoral, the region south of Porto and North of Lisbon, along the Atlantic Coast of the country. Coimbra, of course, is home to one of the longest continually operating universities in the world. A longstanding tradition was that bagpipers from nearby villages came to the University of Coimbra at the invitation of students celebrating events like the Queima das Fitas (ribbon burning ceremony) at the close of the academic year. The Gaita-de-fole is a key player in folclórico dance, and also part of processions during religious festivals and other celebrations.

Frequently in use also is the Charamela. Also known as the Xaramela, this Portuguese instrument with a Celtic, medieval past was actually the progenitor for the modern clarinet.

No band is complete without the essential Concertina, a bellows-like instrument with buttons at both ends but lacking an accordion’s piano-like keyboard. String instruments naturally play an important role: the Cavaquinho is a small four-stringed (wire, nylon, or gut) guitar, and the Viola da Terra—or Toeira— which is a twelve-stringed (steel) guitar originating from the Azores, one of the archipelagos off of Portugal’s mainland.

Not every dance is accompanied by singing, but when it is, as you might expect, the voices are filled with exuberance. Sometimes the men begin, and women answer responsively. I’m surprised by the artificially high-pitched, nasal tones the females use. And by the laughter and knowing looks of the audience, I guess at least some lyrics may be a tad naughty.

Throughout the performance, the women have remarkably managed to keep their shoes on. Some were aided by the fact that their thick cotton stockings are footless. But I see the secret for others, when I can take my eyes off the whirl of color and movement: despite the proximity of their partners and other dancers wearing footwear made for stomping, they are bravely barefoot.

When you have a chance to visit Portugal, don’t miss an opportunity to see some of these traditional Portuguese dances. Better yet, try your own fancy footwork when the music starts, and don’t be surprised if you soon find a partner—with or without shoes.