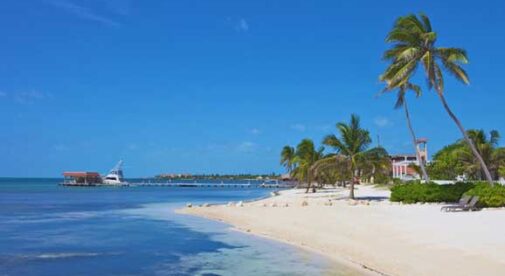 Mike always wanted to retire to tropical Belize, and decided not to wait any longer.

“I’m having the time of my life,” beams Mike Whalen, from his new restaurant in Ambergris Caye, Belize. “I’m still learning as I go, but what better place to do it than a tropical island? I live and work on ‘Coconut Drive,’ for Pete’s sake! How could I possibly have a single, solitary regret?”

In July 2020, at the age of 51, Mike reached a dire crossroads. He’d worked at AT&T in Oklahoma City for years, but after cutbacks during the “COVID economy,” he found himself suddenly unemployed—adrift without a paddle. After four months of unsuccessful job hunting, Mike, in true AT&T fashion, answered the call. This time, though, it was a call to change his destiny.

He’d visited Belize a few times, and enjoyed its wild, tropical charms. He’d dreamed of one day retiring there.

Suddenly with a whole lot of time to sit down and reassess where life was taking him, Mike decided instead to take control of his own trajectory. If Belize was where he’d always dreamed of living after retirement, then…why wait?

Divorced just three years earlier, stressed to the hilt, taking a regimen of blood pressure meds, and then suddenly jobless, Mike became anxious to chase down happiness rather than planning for it to happen “one day” down the road. Although still years away from being able to claim Social Security, he was determined to make his dream a reality. He headed to Caye Caulker, an island on Belize’s Caribbean coast, to scout out opportunities.

“I could’ve kept searching for some desk job, where I’d slave away another 15-20 years for some faceless conglomerate, but I decided instead to take a leap of faith and move to paradise,” Mike explains.

In February 2021, he found a turnkey operation on the nearby island of Ambergris Caye. If Belize has a single focus for the Caribbean dream life, it’s Ambergris Caye. White sand, swaying palm trees, colorful beach houses, and a naturally relaxed rhythm, the island is every inch the tropical dream location.

What’s more, there was an opportunity there that was just the sort Mike was looking for. It was an established restaurant and café, right in the heart of the island’s main town, San Pedro.

Despite his only previous experience in the food service industry being a brief restaurant stint after college, Mike felt ready for the challenge.

By February 2021, he’d sealed the deal—$45,000 for the business name and assets, with a 3-year, $2,000/month lease for the kitchen facilities, courtyard-style property, and a 900-square-foot, two-bedroom, fully furnished, air-conditioned private residence above the restaurant.

He moved to San Pedro a week later—and immediately began prepping for the grand reopening of Patz Delicatessen.

Mike’s work permit was quickly approved after buying the restaurant, filling out some paperwork, and submitting a fee of $1,500. He’ll soon be able to apply for permanent residency, after having lived in Belize for a full year (fees vary according to the applicant’s nationality).

He hired two employees through word of mouth. One came recommended by the previous owner and helped him paint and clean the building. She later practiced day and night to prepare everything on the menu, and quickly mastered it.

It didn’t take long for Mike to establish a dedicated customer base of about 65 local expats, many of whom stop by daily to greet him with smiles and stories. Recently, he’s had a surge in local and tourist clientele as well. Business is booming.

Many of Mike’s friends and family have visited in the past year, with some considering a move to Belize themselves. “They’ve all fallen in love with it,” he says. His 19-year-old daughter has already visited him four times, captivated by the island’s tropical charm. “But I’ve told her she has to finish college before I’ll let her move here,” laughs Mike.

Nowadays, Mike enjoys living life on his own terms. His workday ends by 3 p.m., and his new laidback lifestyle has enabled him to kick his blood pressure medications. He feels like a new man.

“I’m so glad I dropped everything and took the plunge,” he says. “I’ve found happiness in paradise, 15 years before I’d ever imagined.”