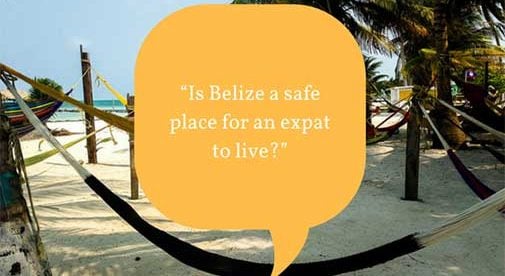 I am Laura Diffendal and I am the Belize correspondent for International Living, and we’re going to do a quick video today on safety in Belize.

However, Belize City is not a place that we recommend for most expats to live. That would be considered a place for an experienced seasoned expat who knows which parts of the city to go, which parts to avoid. In the areas of San Pedro, Placencia, Cayo, you’re going to find crime rates pretty comparable to anywhere else in the world that expats live. If you took out Belize City from Belize, the crime would just be right in the middle, the same as anywhere else.

So is it safe to live in Belize? You will find the vast majority of expats, especially those that live in Placencia which is considered a small town, will say they feel very safe. In Ambergris Caye, because it is a little bit closer to Belize City, they will have a little bit more crime there. For the most part, it happens late at night. It happens when people are trying to buy drugs. It happens when people are very drunk and not following common sense.

Petty theft is high throughout the country. That is something to be aware of. Probably in anywhere you’re going to travel outside the U.S., petty theft is high. Where there’s tourism, there’s going to be petty theft. But being aware of that and taking some precautions goes a long way.

Is it Safe to Travel in Belize?

There’s a wonderful regional jet system. They call them puddle jumpers. They’re very safe, great safety ratings. The water ferries to the island of Ambergris Caye are very safe, although there’s only one highway system and it would be considered about like a country road in the U.S. and it’s not considered, highly safe compared to, let’s say, the highway system in the U.S. Most people get around. They say driving is comfortable for them in Belize.

Is Drug Use Allowed in Belize?

Is Prostitution Legal in Belize?

Sometimes people will ask about prostitution in Belize. It is illegal but, like a lot of places in Central America, you are going to find it in certain bars and there’s a kind of an understanding in each town where that occurs. It’s really not something in the news or something that you’re going to hear too much about.

What Areas Would You Avoid in Belize?

What is the Crime Rate in Belize?

About 140 murders a year in the country. In the last decade there have been 20 murders of Americans. If you look at the total statistics of number of American visitors and the murder rate, this would be over the last 10 years, about 20 chances in 10 million.

One of the very best resources for safety is the U.S. Department of State as they actively work with embassies and are useful for making sense of statistics and understanding actual risk. They have Belize at a Level 2—this means exercise caution—but note, this is the same level as the U.K., France, Italy, Belgium, Denmark, Germany, Spain, Netherlands, and many others. Why do they say this when Belize has a much higher murder rate than those other countries? Because Belize does not have the suburban population to absorb the small number of very high crime areas in the country.

Belize is a developing country and there is a lot of poverty here. If you do not use your common sense, keep things secured and locked— just like anywhere you are increasing your chances of having a problem.

Keeping Your Money Safe in Belize

Don’t carry too much cash with you, it is unnecessary as credit cards are much safer and accepted almost everywhere. Use the safe in your hotel room, and you can go to the ATM here as needed as opposed to bringing a lot of cash with you. It is a very non-materialistic country, and there is no flashing of wealth of any kind here—that looks very strange and out of place and would definitely be a higher risk behavior. Most expats don’t carry jewelry or cash because it looks and feels out of place, and it lowers the chance of being targeted.

Is it Safe to Drive in Belize?

Driving here has some differences from the U.S. It is recommended that unless you are seasoned in Belize or driving in other countries, you take a shuttle your first time here. Renting a golf cart in San Pedro and Placencia is pretty popular and a common way to get around. This addresses driving on the mainland roads.

Is Public Transportation in Belize Safe?

The cabs in the tourist areas are not fancy for the most part, but they are generally recognized as safe. There is no Uber in Belize. Most hotels or local residents can always recommend a cabbie they know, and the cabbies often ride around with their wives and kids in the car.

Hitchhiking, especially expat to expat on golf carts on Ambergris Caye, is generally recognized as safe and you will see people constantly hitching rides with one another here. The bus system is relatively rustic—I do not highly recommend this, and driving in general in the country is not the safest thing in the world. There is no driving school here, and while you aren’t going to be carjacked or anything—you have to defensively drive on the mainland and watch how others pass you etc. If you drive defensively this can greatly reduce your chances of problems, as it is usually reckless decisions that lead to crashes here. You will rarely see too many other cars most places on the mainland, so most crashes are drivers going off the road or passing unsafely. The puddle jumper regional flights and the shuttles throughout the country have good reputations and are recommended.

Can you Drink the Water in Belize?

As far as food and water safety in Belize—you can drink the water in Placencia, but everywhere else, it is recommended that you drink bottled water. Most places make it easy to do so. While you are in a developing country, problems with food are not common, and if you do have any problems, generally it is an upset stomach for a few days. You should check for expiration dates if you buy things at the store, but you rarely hear about any serious food problems. I have yet to hear of one in my six years here.

How is Healthcare in Belize?

There is a great emergency service on Ambergris Caye, and there is a helipad and a clinic coming to Placencia. This is big news and certainly will make a world of difference in the level of risk should you encounter a problem. There is a major hospital in Belize City, and since Belize is relatively close to the U.S. (two-hour flight) you can get to U.S. medical care quickly if needed.

If you have a need for medical care, the polycare clinics are available almost everywhere 24/7 and you can get most prescription medicine by walking into a pharmacy, there aren’t a requirement for most medications to have an actual doctor prescription.