The Ring of Kerry. ©Pusteflower9024/iStock

Because of Ireland’s long and varied history, astounding culture, amazing food, and widespread use of the English language, it’s perfectly possible to spend seven days in just one area of any of Ireland’s hundreds of interesting cities and towns.

Getting a feel for the depth and breadth of Ireland is entirely possible in a reasonably short time thanks in large part to Ireland’s excellent train and bus systems which crisscross the country.

There is no way to see the entirety of the Irish Republic and Northern Ireland in just seven days, but by choosing a few specific destinations and setting some limits, it’s possible to get two or three of Ireland’s must-see destinations under the belt in a week.

Here’s one very subjective and personal itinerary that my wife, Suzan, and I put together that packs in quite a bit of what makes Ireland such a great place to visit in a week. 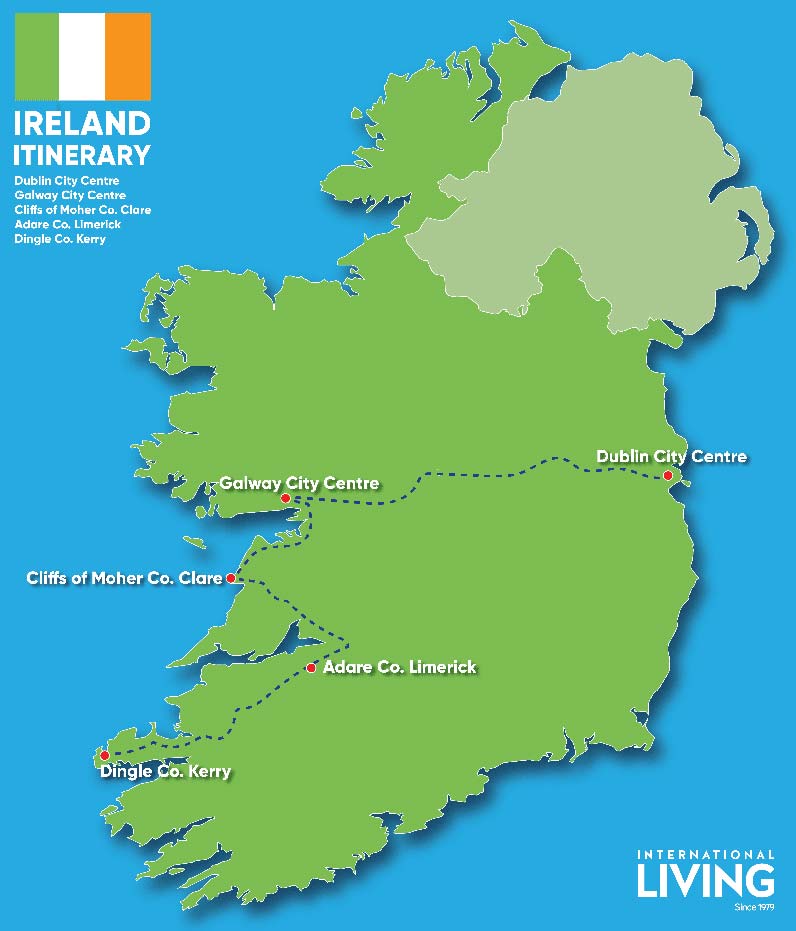 Our trip included several family members arriving at different times during the trip, so our strategy was to use Airbnb accommodation as much as possible. Split between two or three couples, a great house or apartment in a good neighborhood beats the price and size of hotels, and allows you to cook for yourself if you want.

We started the trip by ourselves, though, so we began with a rest up at Dublin’s Hotel Ashling near the Heuston train station. We chose the Ashling because it’s within walking distance not only of the train station, which we’d use later, but also of the nearby Kilmainham Gaol, National Gallery of Ireland, and the Guinness Storehouse, all of which are excellent tours. It’s also easy to get the hop on-hop off bus nearly anywhere in Dublin, and it’s a great way to get the lay of the land in this most historic city.

On day two, enjoy a tour of the Guinness Storehouse and former Jameson distillery. Ireland’s best-known beer and whiskey — how can you not? They are within easy walking distance of each other to boot, and halfway is The Brazen Head, Ireland’s oldest pub, a great place for lunch. For a dinner at the other end of the gastronomic spectrum, try The Rustic Stone in the Temple Bar district, a restaurant owned and run by master chef Dylan McGrath. It’s our go-to in Dublin for imaginative cuisine that never disappoints.

So much to choose from in Dublin—an alternate day might include a visit to Ireland’s national archeology museum, or a stop at Trinity College to view the Book of Kells exhibit, and peek in the Long Room of the Old Library (a marvel in itself). Afterwards, stop in for a pint at Toners Pub, where poet W. B. Yeats preferred to sip his sherry.

Take the train directly across the island to Galway, Ireland’s western-most city. Our Airbnb apartment was a block from the Spanish Arch (part of the old city wall) in the heart of Galway’s entertainment district. Again, a hop on-hop off bus tour is a quick and easy way to get the scope of Galway, and once back in the city center there are nothing but shops, restaurants, and pubs with live traditional Irish music all night. Choose one where you can get a seat close to the musician’s corner…not always an easy thing to do.

Day 4 — Cliffs of Moher and The Burrens

Galway is the perfect base for day tours to the Cliffs of Moher and The Burren, a unique geological area of rolling, sparse, stony expanses, or north to Connemara and Kylemore Abbey. Again, in Galway’s center at night, good food, drink, and music are everywhere, but two of our favorites are Tigh Neachtain and An Púcán. (That’s Irish…Galway and the west of Ireland is home to traditional Irish language and culture. Gaelic is especially widely spoken in Connemara.)

Day 5 and 6— The Dingle Peninsula

On by bus or private driver to the Dingle Peninsula in County Kerry, and the fishing town of the same name. Dingle is home to the freshest fish and the oddest pubs—one, Foxy John’s, is also a hardware store. (Historically, pubs in the area started as stores, bakeries, or other businesses that also served a pint or two to customers. Foxy John’s never dropped its primary business.)

The famous Ring of Kerry is just one peninsula south from Dingle, but we’d been before. If it’s your first time to Ireland, you might want to opt for the Kerry Peninsula—it’s beautiful and the tourism is a bit more developed. Most Kerry tourists stay in Killarney, but we prefer Kenmare…smaller and more charming.

Dingle has a character all its own, though, and the surrounding countryside is postcard gorgeous. It was near Dingle that Saint Brendan the Navigator supposedly set out in a boat and discovered North America sometime in the 4 th or 5 th Century A.D. Maybe, maybe not…but it doesn’t stop any savvy Dingle tour guide from showing you the very inlet where Brendan started his journey.

On day six why not indulge in a full day Dingle Penninsula tour. A competent guide will fill you with so much history and legend associated with almost every turn in the road and geological formation that your head will be swimming by the end.

Make your way to Adare, a small village in County Limerick, regarded as one of Ireland’s prettiest. Alternatively, take a tour of the (very touristy) Blarney Castle in County Cork. If you opt for this, you might want to stay the night at the Hotel Park Inn by Radisson, directly across the parking lot from Shannon International Airport and make this your departure point. Or you could take the train from Tralee back to Dublin and spend your final evening on a pub tour or enjoying a quiet meal in one of the city’s great restaurants. The Morrison Hotel is convenient due to its proximity to many tourist attractions.

If this sounds like too much moving around, you could eliminate one or more of these destinations. Perhaps split your time between Dublin and Dingle or the Ring of Kerry…take the train from Dublin and stop for a night in Kilkenny to tour the fabulous castle there.

This itinerary doesn’t even touch Ireland’s beautiful southeast coast, lake district, Northern Ireland, or the rest of the Wild Atlantic Way —a jaunt that includes the entire west coast of Ireland and winds through some of the most hauntingly rugged and beautiful headlands, bays, and tidal flats imaginable.

Truly, in Ireland you are spoiled for choice.