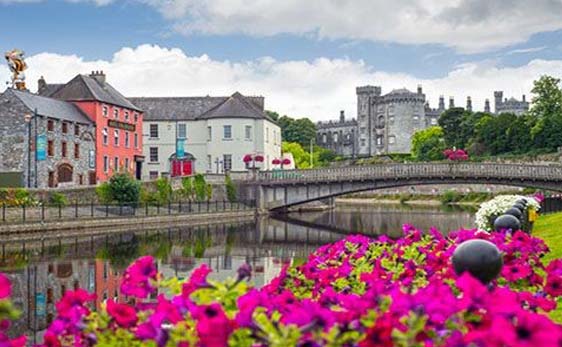 As majestic as Ireland’s coastline appears, its vast stretch of emerald pastures and medieval villages contain their own Irish charm. Situated in the south east of Ireland, the medieval city of Kilkenny is about a two-hour drive from Dublin.

One of its notable assets, its black marble, is actually a fine quality limestone that when polished imitates the luster of marble. Located in the county of the same name, Kilkenny’s remnants of ages past surpass most others while an immersion of the present provides more than enough adventure to fill the days.

Spend three days in Kilkenny and get a taste of Ireland at its best.

Get to know this walkable city, paved with the high gloss cobblestones, and begin with The Medieval Mile. With most cities touting a few historical relics, Kilkenny’s gems stretch an entire mile, beginning at the city’s center at Kilkenny Castle and reaching to St. Canice’s Cathedral. A Medieval Mile Pass ($44 for a day pass) is available providing free admission and discounts to many of the attractions. It can be purchased at the chamber of commerce or online. Frankly, taking one’s time without pushing to get through all the venues in one day will allow you to get the most out of the experience.

Spend the day exploring over 800 years of history. Begin at Kilkenny Castle where the Butler family, who arrived after the Norman Invasion in the late 1100s, owned this majestic property for over 500 years. Upon entry, pick up a guidebook that walks you through the rooms, explains the architecture, and points out historical significance. Don’t miss the 21-acre gardens that frame this relic.

From one end of the route to the other, plan your time wisely, ensuring you don’t miss these notable sites: St. Canice’s Cathedral (climb the Round Tower), St. Mary’s Cathedral, The Black Abbey (over 760 years old), Rothe House & Garden, and end the history lesson with a stop at the Medieval Mile Museum off High Street. Although ancient, the cathedrals still observe mass. During any visit, be respectful of the surroundings.

End the day with another dose of history. Open the wooden door to craic (pronounced crack and meaning fun). More than likely you’ll hear its festivity before you experience it at Kyteler’s Inn, one of the oldest pubs in Ireland. It’s been around since 1324 and still serves a hearty beef stew with a pint of brown ale to wash it down. As tasty as the stew will be, it’s the live music that will rejuvenate the body after a day of trekking about the town.

It’s always a good day for a road trip, and hitting the backroads of Ireland is an adventure. Less than a thirty minute drive to the final destination, make a stop just north of the city at Dunmore Cave. A Viking massacre took 1,000 lives in these ruins as the barbarians moved toward Waterford.

Now it’s time for a taste of the Irish spirit at Ballykeefe Distillery. It’s a grain-to-glass operation for the Ging family, who now opens their doors as Kilkenny’s first distillery in over 200 years. Winning international awards for their Poitín, Vodka, and Gins, it’s a must-sample experience. Distillery tours run twice daily, Monday through Saturday.

It’s a new day in southern Ireland, and it’s a day to taste what makes the medieval city so appetizing.

If you’d rather start by working up an appetite, let the world’s oldest sport ramp up your adrenaline and hunger. It’s the Kilkenny Way, the Ultimate Hurling Experience. For over 3,000 years, this fast-paced Celtic game pairs wooden sticks and small balls with speed and coordination. Try out their Tourist Package. Then, it will be time to feast and drink

Labeled as Irelands Top Foodie Destination of 2018 by the Restaurants Association of Ireland, Kilkenny’s food scene is primed with local producers offering the best in artisan foods.

Much like the local operation of Ballykeefe Distillery, Highbanks Orchards produces organic syrups, ciders, vinegars, and spirits from orchard fruits. Taste and Tour and listen to the story of five generations share tales of apple harvest. The farm offers tours Monday through Friday.

There’s also family history at Goatsbridge Trout Farm, where their passion for the fish is out-of-this-world. Caught daily from the little Arrigle River, the fish stars in the farm tours, where the family shares about the farming system and the art of smoking and processing, plus a few tastes of the delicacy. Tours run Monday through Friday with reservations. Visit their website for some amazing trout recipes.

However, if you want to end the day in true Irish style, walk the medieval mile to the Smithwick’s Experience, sure to leave you craving more from your Irish holiday. A dual that has been alive as long as the brews, the Smithwick (pronounced smid-ic) and Guinness debate will rage forever. For many, this red/pale/blonde ale of 300 years reigns, and will always reign, as the country’s best, and you’ll have to sit and sip for a while to make your own determination. One-hour tours run daily.

Three days simply isn’t enough time to experience Kilkenny; however, it is enough time to fall in love with this medieval city that will call for your return soon.

Things to do in Kilkenny

Pleasantly situated in Ireland’s Sunny South East, Kilkenny—in Irish, Cill Chainnigh meaning “Church of Cainnech”—sits on either side of the River Nore, one of three rivers that run through the county collectively known as the Three Sisters, the other two being the Barrow and the Suir.

Once, during a nine-year period in the mid-17th century, Kilkenny was actually the capital city of Ireland, though its origins date back to pre-Norman times. It was then that the Confederation of Kilkenny, which governed most of Ireland, fashioned a flag featuring a gold harp on a green background which would become famous as a symbol for Ireland all over the world.

Kilkenny city offers a successful blend of the old and the new; an ancient, architecturally illustrated history which has evolved into a buzzing, vibrant metropolis, with great shopping and an electric nightlife.

The beating heart of Kilkenny lies in its ancient Norman byways. A warren of narrow, interconnecting passageways lined with colorful independent shops, where you will find everything and anything you need from clothes to arts and crafts.

But there is so much more to Kilkenny than just its busy center.

Built by the Normans in 1195 and strategically located on high ground, this creeper-clad castle overlooks a ford on the River Nore, and formed part of Kilkenny’s defensive system. It was occupied by the powerful Butler family from 1391 who continued their association with the castle until 1940. Explore the Drawing Room, the Library and the amazing Long Gallery hung with portraits from the past. See the basement’s Butler Gallery which displays rotating art exhibitions, the works of William Butler Yeats and celebrated artist, Louis de Brocquy. Afterward, meander through the beautiful gardens, to find the fragrant rose garden and the ornamental lake.

St Canice’s Cathedral and Round Tower

St Canice’s Cathedral was built in the 13th century on the site of a much older church founded in the 6th century and named after St Canice. It has beautiful stained glass windows and the ancient See Chair of the Bishop of Ossory.

The Round Tower, which stands alongside the cathedral, is the oldest standing structure in the city. It is one of only two round towers in Ireland that visitors can climb and admire extensive views.

The name derives from the Black Friars, members of the Dominican Order, who wore black cloaks over their white habits. It was built in 1225, outside the original city walls to remain independent, but was closed by the Dissolution of the Monasteries in the 16th century. In 1864, the abbey was re-consecrated. It is worth a visit if only to see the astonishing Rosary Window immediately behind the altar. This is the largest stained glass window in Ireland and is composed of five vertical panels depicting the Mysteries of the Rosary.

This new historical museum in the heart of Kilkenny city opened in 2017. It is located in St Mary’s Church and graveyard built in the 13th century. It displays a treasure trove of artifacts depicting the lives and activities of Ireland and its peoples over 800 years. Among many other exhibits you will see fine examples of medieval sculpture, and the country’s largest collection of Renaissance tombs. You will also find Kilkenny’s ceremonial sword and mace, and the Royal Charter of James I.

This superb example of a Tudor town house stands on Parliament Street. It was built in the early 17th century for John Rothe, one of Kilkenny’s most powerful merchants. It comprises three smaller houses from the late 16th and early 17th centuries, each with its own courtyard and garden. These were combined into one large home. Whilst updated internally, its outward appearance has remained unchanged for three hundred years. Inside there is a small archaeological museum displaying locally-found exhibits, whilst outside, the garden has been carefully restored to its original 17th-century appearance with an orchard, herb garden, and shaped topiary hedges.

A Franciscan monastery dating back to medieval times once stood on the site now occupied by the old Smethwick’s brewery on the Medieval Mile. The building operated as a brewery until 2014 when it was turned into an ale-themed adventure experience. Here, it’s all hands-on and you will have the chance to mill the malt, stir the mash, and smell the hops. Finish your tour by downing a cold pint of Smethwick’s draught.

Built as a customs house on High Street in 1761 for collecting tolls, this imposing building with its octagonal clock tower has, over the years, variously housed a courthouse and a guildhall. Today it is Kilkenny’s Town Hall. Its central location, and shelter from the elements make it a natural gathering place for entertainers, musicians, and carol singers at Christmas. In August it houses a temporary gallery for Kilkenny Arts week.

Just six miles from Kilkenny city in Inchabride, Dunmore cave is well worth a visit. It is an easily accessed limestone show cave 46 meters deep and 400 meters long. You will discover incredible calcite shapes formed over an estimated 11 million years, some containing the fossilized skeletons of bats. Legend claims that in 928 it became the scene of a Viking massacre. Certainly, in 1869 a large number of human remains were discovered here, and in 1999 a hoard of ancient silver was discovered in a crevice of the rock.