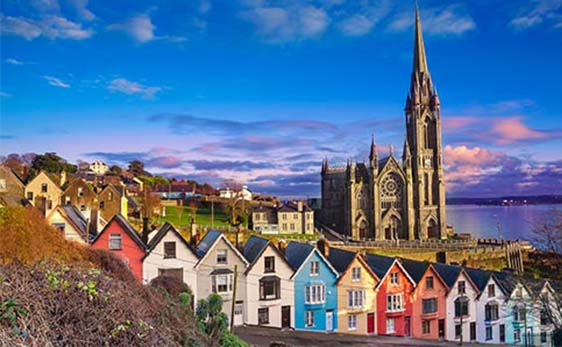 Cork, in southern Ireland, is not only the third largest city in the whole of Ireland, it’s also the country’s largest county. Arguably, the four regions—north, south, east, and west Cork offer some of the most beautiful, perhaps most remote, scenery to be found anywhere in the Republic of Ireland.

Along with the cultural delights of Cork City, its charms include the county’s wild south-west, five rugged peninsulas point like bony fingers into the Atlantic Ocean; Dingle the evocative setting where David Lean’s 1970s movie, Ryan’s Daughter, was filmed—Iveragh, Beara, Sheep’s Head, and Mizen.

It is here that the Wild Atlantic Way ends—or starts, depending on your travel plans. A spectacular coastal route more than 1,550 miles long which winds its way, never far from the ocean, along the Irish west coast from the Inishowen Peninsula in North Down to the colorful harbor town of Kinsale on the River Bandon in County Cork.

Cork people are known for their friendliness, their Céad Míle Fáilte (one hundred thousand welcomes), the time they will take to chat; their unlocked doors and wry sense of humor. One stranger, an American asking a local the way to Bantry, was met with the laconic reply, “Well, if I was going to Bantry, I wouldn’t start from here.”

Cork is also lucky enough to have its own international airport. It is easily accessible and located just four miles south of Cork city center.

Whilst Cork city’s Patrick Street has all the regular high street stores; among them, Marks and Spencers, Brown Thomas, and Primark, The Grand Parade and Princess Street give access to the ancient English Market where locally produced and organic food is sold.

For those who prefer a greater choice of outlets, Mahon Point Shopping Centre—about three miles from the city center—is one of Ireland’s largest malls with over 60 stores including Argos, Tesco, and Boots; a good choice of coffee shops and restaurants, BB’s, Milano, and Nando’s among them. There’s even an Omniplex Cinema to while away an afternoon. There are no pensioner discounts but the cheapest days are Monday to Thursday before 5 p.m.

For those who like to eat out, you are almost spoilt for choice in this bustling city with a wide and varied choice of diners to suit all tastes and pockets. From gourmet pubs to coffee shops, and from bijou cafes to fine dining, Cork has something for everyone, at any time of the day and night.

While during the day, Plunkett Street reverberates to the sounds of street musicians—there is no shortage of nightlife either. Live music, pop and traditional, are sure to get your feet and fingers tapping, and big-name acts are offered at many pubs and clubs. In July the city hosts the world-famous Guinness Music Festival.

For the golf enthusiast, the Mahon Golf course in Blackrock offers an 18-hole round of golf for up to four for a modest $28 to $32. Old Head Golf Links on the other end of the scale is $420 during the high season but includes a senior caddy and golf cart.

While there is a fairly liberal smattering of the rich and famous living in Ireland, a disproportionate number seem to live in County Cork; more specifically, west Cork.

Among the familiar names and faces of celebrities who have taken up residence here— blow-ins as newcomers are known locally, is Oscar-winning actor, Jeremy Irons. He is the lucky owner of Kilcoe Castle which commands stunning views across Roaring Water Bay. U.S. actor, Robert Vaughn, a long-time resident, lived in Durrus until his death in 2016, whilst BBC chat show host, Graham Norton, summers every year at Ahakista on the Sheep’s Head Peninsula.

For the less well-heeled retiree, Cork city or county offers a sanctuary and the perfect lifestyle, too.

Cost of Living in Cork

Below is a typical budget for a couple living in Cork:

The overall cost of living in Cork is generally cheaper than Dublin; the pace of life is slower; and there is less evident pressure. There is no doubt your money will go further in Cork. Living here has all the benefits of living in or near a major commercial city with none of the drawbacks.

Amazing Things To Do and See In Cork, Ireland

Whether you’re in Cork city or county, for a week or only for a weekend, you’re sure to find plenty of fun things to do.

The original city was established on an island that lay between the two arms of the River Lee where, in 606 AD, St. Fin Barre established a monastery. This has gone now, except for nine carved stone heads and the Dean’s gate, but, in its place, you will find its impressive successor.

In 1865 the foundation stone for the new cathedral was laid on the site of the old monastery, but it was not until 1879, when the towers and spires, were completed that the building was finished. It is a fine building constructed from Cork limestone and Bath stone and walls lined with red Cork Marble. Some of the best stained glass windows in Ireland, and a beautiful mullioned rose window, can be seen here, the colors still lustrous and vibrant today.

Since its redevelopment in 2004, St Patrick’s Street, known to Corkonians (local people) as “Pana”, has twice won the award for Ireland’s best shopping street. At 0.3 miles in length, the street is not very long and its curved shape follows the course of the River Lee. You will find here a large number of well-known stores, among them Brown Thomas, Dunnes Stores, M & S, Penneys, and Roches Stores. There are also numerous cafes, coffee shops, and restaurants when you’re ready to take that well-earned break.

This is the beating heart of the city and reflects Cork’s 18th century position as the world’s largest butter market. This unusual, and historic, indoor market offers both tourists and locals a unique shopping experience. Having survived famine, flood, war, and recessions over almost 250 years, the many stalls boast a wide selection of fresh local produce and traditional Irish fayre from artisan bread to fruit, pies, pastries, and jams, to freshly caught seafood, chicken, and meats. There are also plenty of cafes and coffee shops where you can take a break whilst you plan the rest of your day.

If you have the energy to climb the 132 steps of the Shandon Bell Tower of St. Anne’s Church—one of the oldest churches in the city located at Church Street, Shandon—you will be rewarded by great views of Cork and the River Lee.  The tower was known locally as the ‘Four-Faced Liar’ because each of the four clocks on the tower once told different times.

See also the tower’s famous Shandon Bells where you may become a part-time campanologist (bell ringer) if invited to play a tune on them.

Today, Cork City Gaol in Convent Avenue, Sunday’s Well, is a great place to while away a few pleasurable hours. It wasn’t always so. The prison, which opened in 1824, housed both men and women convicted of minor crimes within the boundary of the city. Swearing and drunkenness were common offenses for which a prison sentence might be imposed. The gaol closed in 1923 after almost 100 years. In 1993 the gaol was restored and opened to the public as a popular tourist attraction.

The Titanic Experience in Cobh

Cork’s historic seaport, Cobh, is the world’s second largest natural harbor after Sydney. Once named Queenstown, following a visit by Queen Victoria in 1849, it will forever be associated with the ‘unsinkable’ Titanic. In 1912 this ill-fated steamer made its last stop here to pick up 123 passengers before setting sail to New York on its doomed maiden voyage. A dedicated museum in Casement Square, Cobh town—the original White Star ticket office—invites visitors to ‘Live the history—Feel the story’. An enjoyable and emotional experience.

No trip to Cork would be complete without a visit to world-famous Blarney Castle in Blarney, about five miles from Cork city. Built by one of Ireland’s greatest chieftains, Cormac MacCarthy, in the mid-1400s, it was his medieval stronghold.

Today the castle is a partial ruin although some rooms are accessible including the dungeons and battlements. And it is the battlements, of course, where the greatest attraction of this impressive bastion lies. The Blarney Stone is a large block of carboniferous limestone built into the battlements and may have been a numinous stone upon which the kings of Ireland were once crowned. In a legend that has endured for centuries, kissing the Blarney Stone is said to endow the kisser with the gift of the gab—great eloquence of speech.

Opened in 1969, and operated by Cork County Council, Dursley Island Cable Car transports passengers between Ballaghboy, on the tip of the Beara peninsula, and Dursey Island across open waters.

Dursey Island is one of the few inhabited islands that lie off the southwest coast, and from here you can watch for whales and dolphins. But there are no shops, pubs, restaurants, or cafes on the island, so don’t forget to take a packed lunch.

Located in a heritage building in Emmett Place, The Crawford Gallery is a public art gallery and museum which opened in 2006 and is known locally as “the Crawford.” The gallery displays over 3,000 works of 18th-century Irish and European paintings and sculptures, and screens contemporary films. The award-winning café serves delicious local food in an attractive surrounding, at an unhurried pace.