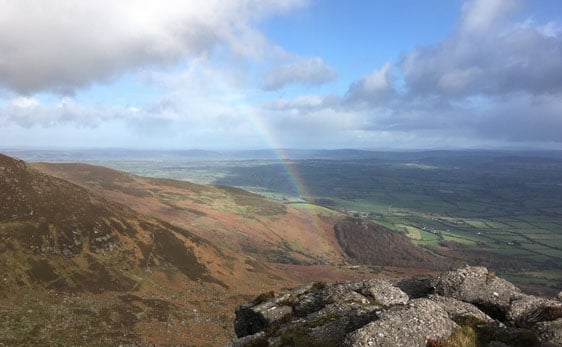 Overview of The Climate and Weather in Ireland

Due to its proximity to the Atlantic Ocean and the presence of the Gulf Stream, Ireland enjoys a mild, temperate climate with warm summers and mild winters…for the most part. Weather extremes are rare here. In winter, temperatures vary from 39 to 45 F. In summer, averages range from 54 to 60 F and peak in the 70s F.

Most of the country’s weather systems come in from the Atlantic, which is one reason why the air is so wonderfully fresh and clean.

Ireland has four seasons, spring (February, March, April), summer (May, June, July), autumn (August, September, October), and winter (November, December, January)…but don’t be too surprised if you experience them all in one day. Ireland’s climate is best described as changeable.

Of course, the sun does appear sometimes—from mid-May through to October, bright, clear days with warm sunshine aren’t as rare as you might think. When winter rolls around, it’s never severe, though days are short and dark with sunset around 4 p.m. in midwinter.

The one thing can you can count on in Ireland is rain. You don’t get to be known as the Emerald Isle without quite a bit of rainfall. The west of the country gets the most, between 39 and 49 inches a year, while the east averages around 25 inches a year.

December and January are the wettest months. Snowfall in winter tends to be light and typically lasts no more than a couple days. So, look on the bright side, make the move here and you’ll never have to water your lawn or shovel snow again.

Of course, the weather you experience here will in large part depend upon the time of year you visit and where in Ireland you choose to explore.

According to Ireland’s meteorological office, Met Eireann, the town of Athenry in Galway, in the west of the country, is Ireland’s wettest spot, experiencing 120% of the regular annual rainfall in Ireland. Sherkin Island off the coast of county Cork, has the lowest levels of annual rainfall.

If you’re a sun-seeker, a good bet is to head for Ireland’s Sunny South-East, comprising the counties of Carlow, Kilkenny, Tipperary, Waterford, and Wexford. The region is so-called thanks to the higher than average hours of sunshine each day—between five to seven hours in the summer months.

If you’re not afraid of getting wet, pack a rain jacket and head for the weather-beaten West Coast. Here you’ll find the Wild Atlantic Way, a 1,553-mile coastal driving route offering some of the most spectacular beaches, cliffs, mountains, and towns you’ll find anywhere in the world.

Chances are wherever you go in Ireland, the weather will be a conversation starter… Whether it’s “Lovely day!” or “Desperate out” it’s one of the best ways to get the locals talking. In fact, a survey conducted on the topic revealed 60% of Irish people talk about the weather twice a day!