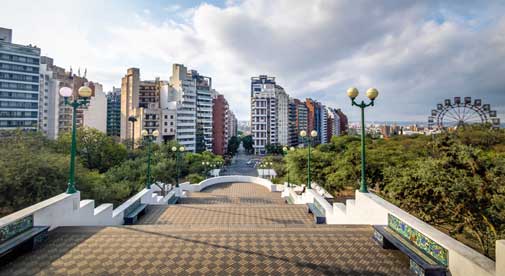 In recent years, Argentina has established a reputation as an attractive destination for tourists and expats. As a vacation spot, it offers vibrant European-style cities, superb food, inviting Atlantic beaches, diverse wilderness, and a welcoming vibe. For retirees, it provides a relaxed, affordable lifestyle, impressive real estate bargains (especially rentals), plenty of enchanting regions to choose from, and a high quality of life bolstered by reliable infrastructure.

But how does Argentina stack up when it comes to safety?

Argentina is one of the safest nations in Latin America. Global safety indexes consistently place Argentina above most of the rest of South America for peace, safety, and security—and ahead of the U.S. as well. The U.S. State Department advises ‘exercising normal precautions’ throughout the country (always check their Travel Advisory for updates).

You’ll feel quite safe in most parts of Argentina, regardless of the duration of your stay. In most cases, common-sense precautions are all you’ll need to stay away from trouble.

Petty street crime in larger cities can be a problem, just as in many parts of the world. This might involve snatching bags, phones, or expensive jackets from the back of chairs in outdoor restaurants, pickpocketing in public markets or around bus stations, late-night muggings in dodgy entertainment districts, passport theft, etc.

Bag-snatching by thieves on motorcycles (motochorros) is also something to be aware of on busy streets, especially in tourist areas. Keep your guard up in at-risk locations—alertness is the best defence against opportunistic criminals who might target your camera, money, or other valuables.

Traveller tip: always carry a photocopy of your passport around with you in South America.

In some parts of South America (including Argentina) you should be aware of the old ‘taxi driver note switch’ scam, in which you hand over a large-denomination note and the driver hands it back to you, claiming they can’t accept it because it’s counterfeit. In actuality, they have just secretly swapped your perfectly valid bill for a hidden fake one. Being overcharged by unlicensed taxi drivers is a distinct possibility, too.

It’s better to pre-arrange a taxi than to hail one from the street; handy taxi apps make this easier. Uber is also present in Argentina. Do your research about taxi rides from international airports—know how much they should cost and which companies are the most reputable. Remises (hired cars that charge by the kilometer) and radio taxis with a fare meter are the safest, most reliable form of public transportation.

Whenever you’re in a taxi, keep windows shut, doors locked, and valuables out of sight on the floor near you. This helps thwart any quick-grab thieves preying on vehicles stopped at traffic lights.

The disparity between rich and poor can be stark in Argentina and around a third of the country’s residents live below the poverty line. Most crime you’ll encounter is small-scale and non-violent and can be avoided with common sense and situational awareness. Constantly monitor your immediate surroundings in and around banks, restaurants, ATMs, bars, and out in the street. Keep valuables well hidden and leave expensive items at home. Laptops and cell phones are popular targets, so guard them well—it only takes a second to snatch one in broad daylight. Keep wallets in a zippered pocket or concealed pouch whenever possible.

Incidents of ‘express kidnapping’ (forcing victims to withdraw money from ATMs before releasing them) seem to be less of a problem in Buenos Aires now compared to 2014 to 2016, when this was a serious issue until police clamped down and made several high-profile arrests.

Compared to the U.S. with its profusion of tornadoes, earthquakes, flooding, blizzards, summer forest fires, and wild storms, Argentina is a relatively safe country when it comes to natural disasters. However, there is the occasional risk of volcanic eruptions near the border with Chile in the Andean mountain regions; the Copahue volcano is still active, for example.

Seasonal storms in the pampas and the north-east of the country can sometimes cause severe flooding. Earthquakes are rare in Argentina but they do occur, usually along the country’s mountainous western border.

Despite strict laws and severe penalties, drugs are widely available in Argentina—but not something the average visitor or expat will have to worry about unless they go looking for trouble.

Solo females in Argentina enjoy a high level of personal safety. Aside from the possibility of some unwanted attention in bar/club areas late at night in certain areas, women in Argentina generally feel safe. In suspect areas and at night, calling for a taxi rather than walking home alone is the sensible move.

Buenos Aires can seem benignly peaceful one day and a hotbed of protest the next, depending on the political and social climate at the time. Steer clear of all street demonstrations (regardless of how peaceful they appear) and you should be fine.

Always know where you are. In Buenos Aires, popular tourist districts can be adjacent to run-down, seedier areas. Carry a paper map or use a location app on your phone to avoid getting lost and ending up where you don’t blend in. Even when you’re lost, try not to look lost.

Whenever you use your card in a restaurant or shop, make sure you’re present when it’s swiped through the little machine—don’t let your card out of your sight for a second. This simple precaution applies anywhere in the world.

Overall, Argentina is a friendly, welcoming country to visit and a peaceful, safe place to live—so enjoy yourself.

Retiring in Argentina Comes With a Lot of Positives

Cost of Living in Argentina

Where is Argentina? – Map of Argentina