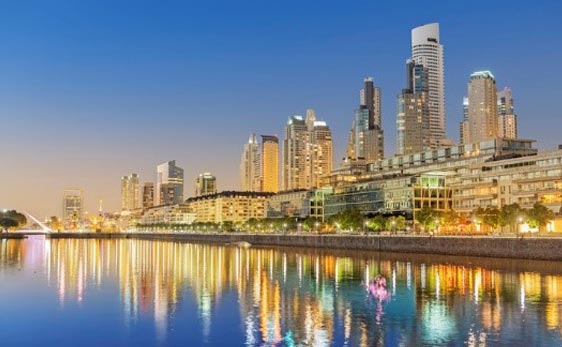 Cost of Living in Argentina

There are plenty of compelling reasons to live in Argentina—the spectacular diversity of natural scenery, the relaxed, family-focused lifestyle, the European feel of many of its attractive cities and the expat-friendly visa options. But one of the most promising incentives for starting a new life here is the sheer affordability.

Most everyday living expenses in Argentina (groceries, internet connection, restaurant meals, going to the movies, etc.) are around 50 to 60% lower than in the United States. If you’re renting a place to stay, the news is even better: apartment rentals across Argentina average about 75% cheaper than what you’ll pay back home. Things like childcare, alcoholic drinks, and public transport are ridiculously inexpensive compared to the U.S.… and the more time you spend in Argentina, the more ways you’ll discover to save money by living like a local.

Grocery Shopping and Eating Out

Argentina is foodie heaven. You’ll probably have the best steak of your life here, and a strong Italian immigrant presence means that pizzas, pastas, and calzones are everywhere. Lunch can be a real bargain: a baked empanada (small meat pie) costs less than a dollar, a cappuccino can be had for less than $2 and a large restaurant pizza comes in at around ten bucks.

Many restaurants offer a set lunch or dinner menu (menu ejectivo) that includes a starter, a main course, dessert, and a beverage for as little as $8. To save money, eat at the popular hole-in-the-wall places with the locals, rather than touristy cafes in the main squares with tablecloths, bow-tied waiters, and English menus. Expect to pay $16 to $25 for a delicious three-course dinner with wine.

In Argentina’s cities, you can find just about any local or imported food you need. Cooking for yourself instead of eating out is a proven money-saver and when grocery-hunting, you’ll find that the best bargains come from local markets rather than modern, air-conditioned supermarkets.

To find the best food deals, visit the local fish, meat, and produce markets early on weekend mornings. There are few joys in Argentina as satisfying as filling two shopping bags full of fresh fruit and vegetables—as much as you can carry—for less than $20.

Argentina’s two main cell phone operators are Claro and Movistar, with 2G, 3G, and 4G plans available. Nextel or Personal are the other carriers. Just grab a pre-paid SIM card (chip) with a local number for a few dollars and you’re good to go. You can top up your credit at kiosks, supermarkets, pharmacies and other recharge (recarga) outlets easily. Pick up a 7-day data plan from either carrier for around $2.75.

Internet connection costs typically run at about half of what you pay in the U.S., though this can vary a lot depending on location and the quality of the connection. Don’t expect impeccable connections in remote parts of Patagonia, for example.

A standard monthly utility bill for an 85-square-meter Argentinian city apartment (heating, cooling, water, electricity, and rubbish removal) should come to around $90—about $60 less than you’d pay in the States.

Due to wide fluctuations in the peso, property in Argentina is often evaluated (and sold) in terms of U.S. dollars. If you’re planning on buying a place for your retirement, the best deals on houses are found just outside the major metropolitan areas. For many expats, Argentina’s super-affordable rental costs are one of the country’s most appealing attractions, with prices in some areas being half—or even a third—of the cost for similar-sized abodes in the U.S.

In some cases, the price differences can be downright mind-boggling: for example, a three-bedroom, city-center apartment in Santa Monica, California might cost you about $5,880 a month to rent. An equivalent-sized apartment in beautiful Mendoza, Argentina will only set you back $376…more than 15 times cheaper.

From North America, getting to and from Argentina is easy—the least expensive direct flights are from New York and Miami. However, you may find domestic flights within Argentina a bit pricey if you’re not a resident (Argentinians get a tax break on internal airfares that foreigners don’t).

Fortunately, the bus system in Argentina is modern, comfortable, and inexpensive—and reaches into every corner of the country. Many buses feature wrap-around panoramic windows, on-board Wi-Fi, movies, and cama seats (suitable for snoozing) that recline almost flat.

For example, the 9-hour bus trip from Buenos Aires to Cordoba averages around $42. From there up to ultra-liveable Salta in the country’s north-west is another 12 hours and only an additional $60.

The Argentinian rail network isn’t too extensive but trains can be a pleasant way to travel between Buenos Aires and cities like Santa Rosa, Mar del Plata, and Rosario. Fares are reasonable and some routes even offer sleeper cars.

Getting around Argentina’s cities and towns is quite cheap. Local buses (colectivos) are the most frugal option—in the capital, for example, you can go right across the city for 25 to 50 cents (make sure you’ve got the right change).

Taxis are a popular option in Argentina’s cities—there are 40,000 of them in Buenos Aires alone. You can either hail one from the street, call ahead for a Radio Taxi or use an app such as Easy Taxi. A mile in a taxi should cost you less than $1.

A transit pass can definitely save money in Argentina’s larger cities; expect to pay $15 to $20 for a monthly card—about a quarter of what you’d pay in most U.S. cities.

A high percentage of Argentina’s doctors and specialists are overseas-trained. Many pharmacies are open 24/7. You’ll find all the same types of medical services as you’re used to in the U.S. but at a fraction of the cost. Outside the country’s four or five biggest cities, however, the quality of medical care and facilities can vary greatly.

Argentina has both public and private hospitals. Most expats use private health services because they’re affordable, waiting times are reduced and the quality of nursing and aftercare is better. Foreigners can sign up for Argentinian health care plans without any problems—most stipulate a minimum term of 6 months. Costs can be as low as $40 a month. If you have a specific health issue and want to seek treatment in Argentina, you can also apply for a one-year, multiple-entry Medical Visa.

A visit to a specialist doctor in Argentina typically costs between $20 and $60. Dental care is top-notch and prices are about a quarter of what you’ll pay in North America. Quality cosmetic surgery is also affordable and highly sought-after: a facelift costing $7,700 in the U.S., for example, goes for around $2,400 in Buenos Aires.

If you shop around, you can find monthly gym memberships for around $30 in Argentina. Many fitness centers also offer super-cheap daily rates. Many of the parks in larger cities feature free outdoor workout stations too, so it’s easy to keep fit here without paying a cent. Renting a bicycle costs about $2 an hour in Buenos Aires or $12 to $15 for a full day.

An international movie release at the cinema will set you back about $6—roughly half the typical U.S. price.

If you have small children, you’ll find Argentinian childcare prices considerably more affordable than in the States, where the typical monthly cost for a full-day private preschool runs at around $880. The equivalent cost in Argentina is closer to $148.

So how much does it cost to live per month in Argentina? Well, that depends a lot on your lifestyle and location—living expenses tend to be about a third cheaper in rural areas compared to the larger cities. Many expats and retirees manage to live quite comfortably on $1000 to $1,300 per month, and couples on around $1,500 to $1,800 a month. Cheap rent provides a big boost to Argentina’s affordability, especially for those who choose to reside outside the more popular tourist districts.