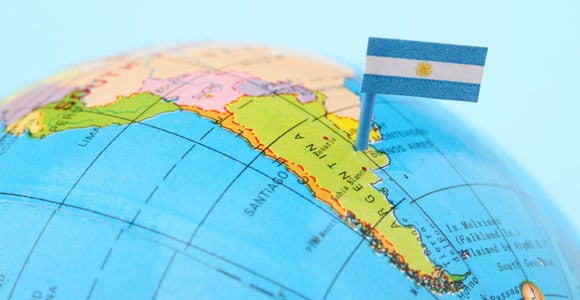 Fun and Interesting Facts About Argentina

Location: Argentina is in the southern part of South America, between Chile and Uruguay. It borders the South Atlantic Ocean.

Geography: Rich plains dominate the northern half of Argentina, while the southern half consists mainly of flat to rolling plateau. Argentina’s western border has a rugged, elevated landscape leading into the Andes mountains.

Climate: Argentina is subject to a variety of climates. The north of the country experiences very hot, humid summers (which result in a lot of swamp lands) with mild drier winters, and is subject to periodic droughts during the winter season. Central Argentina has hot summers with tornadoes and thunderstorms and cool winters. The southern regions have warm summers and cold winters with heavy snowfall, especially in mountainous zones.

Currency: The legal currency of Argentina is the Argentine peso (ARS). $1 = 16 ARS

Head of State and Government: President Mauricio Macri (since 10 December 2015). The President is directly elected by a majority vote. In order to win, the President-Vice President ticket must receive either 45% of all votes, or 40% with a 10% lead over the runner-up. If this is not achieved, a subsequent election is held between the two favorite candidates, with the presidency going to the majority favorite. A presidential term lasts for four years with a possibility of immediate re-election for one more term. It is not permitted to run for three consecutive terms, but any former president is allowed to run again once they have been absent from the election for one term.

Language: Spanish is the official language of Argentina, with English, Italian, French, and German also spoken throughout the country.

Religions: A huge majority of the Argentinean population identify as Roman Catholic (92%), however less than 20% are practicing. This is followed by Protestant (2%), Jewish (2%), and other religions (4%).