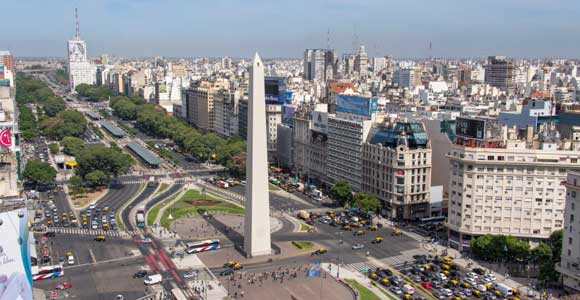 As the eighth largest country on earth, Argentina is a land of incredible variety—lively cities, jutting mountains, tropical jungle, thundering waterfalls, stunning glaciers, colorful deserts, and inviting summer beaches. There’s plenty of space, too: Argentina is ranked way down at 33rd in global population so finding a quiet, peaceful spot to call your own is never a problem.

Geographically, Argentina is simply mind-boggling. In the south, the Patagonian wilderness covers an area (shared with Chile) of more than a million square kilometres and ends at Tierra del Fuego, gateway to the Antarctic. Along the country’s northern border, you’ll find Iguazu Falls, one of the world’s most spectacular waterfalls featuring nearly 300 separate cascades. It’s right in the middle of a rainforest inhabited by jaguars, toucans, coatis, and exotic butterflies. Further west, the vast wetlands of Los Esteros del Ibera offer boat trips where you can see spectacled caimans, rare marsh deer, capybaras, and yellow anacondas. This everglades-like area is one of the most underrated wildlife-viewing regions on earth.

Along Argentina’s western edge, it’s all about the mountains. Here, the Andes reign supreme, with Mount Aconcagua (the country’s tallest peak) stretching up to nearly 23,000 feet above sea level. The Andes are home to rare plants, friendly locals, unusual wildlife, and inviting towns like Bariloche—where you can ski, hike, camp, visit volcanoes, raft, mountain bike, fish for trout, or just sit on the porch of your Swiss-style chalet, sipping wine and staring across green forests and transparent blue lakes.

An Intriguing and Super-Affordable Destination

As a U.S. or Canadian citizen, you can visit Argentina on a 90-tourist visa which is easily renewed. That means you can take your time exploring this inviting nation from top to bottom… and you’ll be spending a lot less per day than you do at home. Argentina’s overall cost of living is about 60% cheaper than in the U.S. and rental accommodation can be less than half the cost in many areas.

Lunch shouldn’t cost you more than $6 to $8 in Argentina and a leisurely, three-course dinner at a decent restaurant will be around $20. Order the set menu (menu ejecutivo) to save even more money at popular eateries. A domestic beer, cappuccino, or empanada (small, oven-baked meat pie) will rarely cost you more than $2.

The best way to eat cheaply in Argentina is to shop at local famers’ markets and cook for yourself in your own accommodation. A kilo of potatoes will run you about 60 to 70 cents, a dozen eggs is less than $2, a kilo of chicken breast costs $4, and a good bottle of Argentinian wine can be had for $3.50.

There is no place on the planet like Patagonia – it’s tailor-made for outdoor adventures. Weather-wise, the best months to visit are January and February, when the area is at its warmest (‘warm’ being a relative term in Patagonia at any time of year). Prime whale watching season runs between June and December. Here are just a few of Patagonia’s many highlights:

This is Argentina’s largest national park and home to the awesome Perito Moreno Glacier, an 18-mile-long ice sheet that’s the third-largest freshwater reserve on earth. It’s only one of more than 40 glaciers spread across this stunning region.

Search for whales out of Puerto Madryn –

The picturesque town of Puerto Madryn is an ideal base for wildlife-viewing, especially if your dream is to see a southern right whale cavorting in the sheltered waters of Golfo Nuevo Bay. Whale-watching tours depart frequently and usually last a couple of hours. Full-day driving tours in this isolated region are also a great option, with an opportunity to spot everything from penguins, sea lions, and orcas to guanacos, foxes, armadillos, and ostrich-like rheas. Bring your camera, warm clothing and a sense of adventure—and don’t expect too many paved roads.

Walk through a colony of half a million penguins –

Not far from Puerto Madryn, a massive colony of Magellanic penguins congregates in the Punta Tombo Wildlife Reserve between September and March to rear their young. You can get quite close to them—it’s the kind of experience that makes you feel like you’re in the middle of a beautiful (but rather noisy) David Attenborough documentary.

Stroll around the world’s southernmost city –

At Argentina’s southern tip, the remote and unforgiving Tierra del Fuego offers up a tiny slice of civilization – the port of Ushuaia. From here, you can hop on a boat to look for orcas and seals or take the End of the World Train into Tierra del Fuego National Park for some serious hiking.

In October, November, March, and April, Patagonia’s popular trekking routes are less crowded than in the height of summer. Temperatures aren’t much cooler but the fall colors in March and April are unbelievable. The serene village of El Chalten (2 to 3 hours’ drive from El Calafate) and the pretty mountain town of El Bolson are tranquil bases from which to explore the forests, waterfalls, jagged peaks, and clear lakes that this region is famous for. The tourist hub of Bariloche is a very civilized, postcard-perfect small city nestled within lovely natural scenery that offers a wealth of outdoor activities as well.

For warmer wilderness experiences, head to the ‘top end’ of Argentina. From Salta Province in the west to the subtropical rainforests of Misiones Province in the east, Argentina’s northern edge offers a whole different experience than Patagonia. In Misiones Province, Iguazu National Park and the Yacutinga Private Nature Reserve serve up a jungle setting where pumas, tapirs, parrots, black howler monkeys, and rare giant otters still live in the most secluded parts of the forest.

If you’re based in the ultra-liveable city of Salta in Argentina’s north-west, you’ll find yourself surrounded by some of best natural areas in the country: deserts, mountains, raft-worthy rivers, and forests. The national parks of Baritu (bordering Bolivia), El Rey, and Los Cardones are wild and impressive and the Pizarro National Reserve, a little-known spot near the tiny town of General Pizarro, boasts an indigenous community, hot springs, and plenty of explorable nature; there’s not much there in the way of visitor infrastructure or official camping spots and you’ll need your own car to get there, but it’s worth it.

Apartment rentals are cheap and easy to come by in most parts of Argentina. On Airbnb, you’ll normally get a discount for stays of a week or more; month-long stays work out even cheaper. In an apartment, your accommodation costs will typically average out at less than $40 per night. In Buenos Aires, choose a place on a higher floor so you’re above the traffic noise.

Buses between main tourist areas in Argentina are modern, comfortable, air-conditioned, WiFi-equipped, and offer terrific views of the countryside. They’re a cheap, safe, and enjoyable way to get around. For example, the bus from Buenos Aires to Salta takes 20 hours, travels nearly 800 miles and only costs around $30.

Shopkeepers in Argentina don’t always have a lot of spare change on hand, so try to keep a range of coins and small banknotes with you. This also applies to buses in Buenos Aires, which normally require exact change for a ride across town. On the subject of money, some travellers bring a wad of U.S. dollars with them into Argentina, so they don’t have to use ATMs quite so often. ATMs are convenient but withdrawal limits can be as low as $150 in some machines—and you’re charged a fee each time you use them. Credit cards are also widely accepted throughout Argentina.

Tap water is normally safe to drink throughout Argentina but if in doubt, check with the locals. A small bottle of water costs less than a dollar here so that’s an easy alternative.

Tipping isn’t the norm in Argentina. If you feel the service is exceptional, a 5% to 10% restaurant tip is ample and much appreciated but there’s no pressure to tip here.

Argentinian beef is famous the world over, and if there’s one country on earth where you should sample a thick slab of juicy, grass-fed steak, this is it.

Argentina provides every kind of weather imaginable, from sweltering summer heat to brisk mountain air that’ll severely test the efficiency of your ‘layering system’. Patagonia is famous for its freezing winds and in the Andes, you should always be prepared for storms and abrupt temperature drops.

Knowing some basic Spanish phrases can simplify life when you’re shopping in the markets, buying a bus ticket, ordering food or asking for directions. The more you practice, the better you’ll get. Translation apps on your phone are handy when you need to cheat.