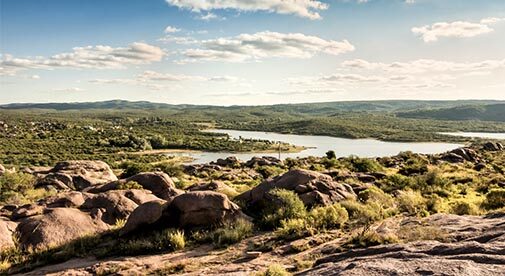 Here in Capilla del Monte, Argentina, we’ve endured one of the strictest and longest COVID quarantines in the world. Way back on March 20th, when we had only 100 cases of coronavirus in the entire country, President Alberto Fernández shut everything down.

All businesses were shuttered, except for those supplying food, medicine, or money. These essential places could only open for a few hours in the morning, and had strict limits on the number of people allowed inside at one time. The main street in my city center looked like a ghost town. Except, that is, for the long lines outside each grocery store and bank. The government painted marks on the sidewalk at socially distanced intervals to show us where to stand while we waited our turn. Normally I hate lining up for anything, but I came to appreciate those rare moments that I could speak to another human face to face.

Only one person per household was allowed out to make essential purchases, and we had to do so within a 500-meter radius of our home. The police patrolled the streets to make sure people weren’t detouring to visit non-essential areas like parks or loitering to talk to friends. This rule became even stricter later in the quarantine, when we could only leave on designated days based on the last digit of our ID number. My passport ends in an odd number, so I could only leave the house on odd-numbered dates of the month. I was so thankful that we live in a small mountain town with dirt roads and amazing views! I rode my bike to buy groceries most days for exercise, and we’d watch the sunset every evening over the mountains from the socially distanced safety of our porch.

I did not lay eyes on another child for almost two months. Kids were not allowed outside for any reason, at any time. Our 9-year-old daughter was literally climbing the walls—we hung old garden hose from the roof of our balcony for her to swing and climb on. I was overjoyed in May when the President announced that minors were finally allowed to go outside for a walk. These walks were only permitted on one weekend day that corresponded with the parent’s ID number, and could only be within 500 meters of the house, but it was a step towards freedom!

Our town enacted a 4 p.m. curfew. The fire station would ring a siren at 3 p.m. as a warning, and again at 4 p.m. to signal curfew. After that, the only sound I’d hear was the occasional police car cruising around looking for curfew-breakers.

At a national level, the Argentine government closed their borders and grounded all planes except for occasional repatriation flights. They also locked down all travel within the country—we couldn’t even go to the next town 15 minutes away without a special permit and an exceptional reason. As I write this in early October, planes are still grounded except for cargo or repatriation flights, and there are still restrictions on entering neighboring towns.

Our local government built roadblocks out of tree branches and dirt at every entrance from the highway into our town, so that vehicles are funneled into one of only two entrances. These entrances are manned by police who will only let you in if you can prove that you live here. This system is still in place today, with no signs of being relaxed. Tourism is at a complete standstill here and across the country.

From my snippets of conversation while out shopping or on the phone, I found that people were mostly positive and accepting of the sudden changes. Friends pointed out that Argentines have had to deal with much worse in their country’s history. Our neighborhood self-organized to identify at-risk people and set up a system for delivering them groceries. We had no shortage of food (or toilet paper!) like we saw in the U.S., and I gained a new appreciation for the geographic scope of Argentina. This country stretches from tropical rainforest to snowy peaks to the ocean, so we get diverse foods here without importation.

The President talked proudly about prioritizing health over the economy, and his approval ratings jumped up. He banned foreclosures and evictions, froze rent and mortgage payments, and issued monthly 10,000 peso payments to the unemployed (about $100). But after seven months of quarantine, we’re seeing a surge in unemployment and bankruptcies, the economy is collapsing, and people are protesting the world’s longest quarantine.

Should we stay or should we go?

Like most people across the world in April, I read the news fanatically every day, trying to analyze the limited information available. My husband, John, and I debated endlessly what to do.

A small town in a developing country is a great place to be if you’re trying to avoid COVID, but it’s a terrible place to be if you contract COVID and become seriously ill. In April, the President announced he’d open up some repatriation flights for U.S. citizens over the following week, and that there may not be any more until September. We’d have to commit to staying six months during this period of extreme uncertainty, or leave right now. We spent the day researching online and calling doctor friends, trying in vain to analyze our way to a logical answer—should we stay or should we go?

I read accounts from other travelers attempting desperate drives across the country to get to Buenos Aires, the only functioning airport in the country, to catch the “last flight out”. Each province in Argentina demanded different paperwork from travelers to pass through—a letter from your embassy proving you had a repatriation flight, a doctor’s note saying you were healthy, something from the police—the list was constantly changing. Some people were turned around, while others were stopped and taken to a forced quarantine in hotel rooms shared with other travelers.

The prospect of trying to buy three elusive tickets, travel over land to Buenos Aires, and then subject ourselves to a dozen-plus hours of travel with hundreds of other people… just didn’t seem like a smart idea when trying to avoid a contagious disease. Plus, where would we go? We don’t really have a home anymore in the U.S., and what would we do about health insurance there?

On the other hand, I sometimes feel uneasy living through such a significant world event in a foreign country. I struggle to understand the nuances of the official decrees about ever-changing quarantine rules in Spanish. We don’t know the healthcare system here as well as in the U.S. We don’t have a family network to lean on. And, fundamentally, we are less free than in the U.S. The news here regularly reports the number of people fined for breaking quarantine—not wearing a mask or going for a bike ride too far from their house. While this feels overbearing for U.S. citizens like us, used to our inalienable rights, it’s also the reason Argentina has so many fewer cases.

Looking back now, from the comfort of October, I’m glad we decided to remain in our expat lives here in Argentina. April and May were hard months of uncertainty and confinement, but in June and July, the President gradually started relaxing the quarantine. Curfew was abolished, outdoor activities and social gatherings permitted, non-essential stores like restaurants opened—and I really started to fall in love with this little town of Capilla del Monte.

It’s an incredible luxury for me to have such easy access to the outdoors. In our old lives in California, we drove at least three hours for our favorite outdoor activities, and this typically came with crowds of people and a high cost of living. Here, I can walk directly out my back door onto trails into the mountains, usually seeing more condors than people. I can ride my bike to the nearby rock climbing area, where I sometimes meet up with a group of enthusiastic locals who get out adventuring most afternoons. On hot days, we scramble up one of several river canyons exploring swimming holes and waterfalls, boulder hopping, and jumping into deep pools. Socially, we are trying to find the right balance with COVID, but outdoor activities are relatively safe to do with others and so we’ve enjoyed making friends with the gregarious and ever-welcoming Argentines here. So, COVID or not, we are happily settling down for the long-term in this low-cost, laid-back, beautiful town.

It remains difficult to get to Buenos Aires over land, and flights are still infrequent and hard to come by, but we feel relatively safe in our little bubble. We are less likely to catch COVID here, and we’re in a beautiful spot to wait it out. Only time will tell if we are making the right choice. In the meantime, I’ll keep squeezing fresh juice from Argentine oranges every morning and soak up the daily Sierra sunshine to boost my vitamin C and D, while enjoying our small mountain town life.

Is it Safe to Live in Argentina?