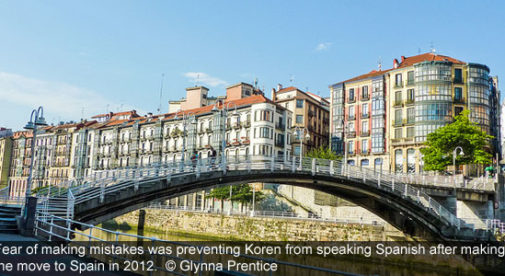 I’d probably been trying to learn Spanish for a good year or more before I had a sudden realization that dramatically and instantly changed my attitude—and had me picking up new words faster than ever.

Let me set the scene. I made the decision to move to Spain in 2012, after spending a mere five days here during a whirlwind European trip with two girlfriends. I knew not a scrap of Spanish beyond hola, yet my mind was set. I would soon call this boisterous, disorganized, vivacious country home.

I headed home and promptly signed up for once-a-week Spanish classes, which fell by the wayside about two weeks later. Consequently, when I arrived in Barcelona mid-2013, I had only a few basic sentences under my belt. I was like a fish out of water and I knew I had to learn—fast.

I clutched at a thousand different straws in a bid to rapidly improve: two-week intensive courses, podcasts, grammar drills, listening to Spanish music, and watching Spanish television series (tip: Spain has a fabulous television show styled on The Wonder Years, named Cuéntame Cómo Pasó, which you can watch for free via the RTVE website).

Sure, I was learning. But the new words and phrases just didn’t seem to stick. I could still barely communicate. I felt embarrassed as I attempted to force out a few broken sentences and nervous about the accidentally rude or suggestive mistakes I seemed to make too often. I imagined my conversations were excruciating for anyone listening in.

Then one day it hit me: by worrying so much about what could go wrong, I was cutting myself off from the very thing that would help me learn.

Fear of making mistakes was actually preventing me from speaking. Unwarranted fear, at that.

Think about the times you’ve chatted with a foreigner attempting to speak English as their second language. Rather than deriding them for the mistakes or awkwardly funny phrasing, I’d bet you focus on the things they do get right. You’re probably supportive and encouraging, even impressed by their ability to communicate in another language, however rudimentary their grasp.

Doesn’t it make sense that, when the situation is reversed, people will treat you the same way?

This realization sparked a major attitude change for me. I started jumping into more conversations, mashing together the few words I did know to get my point across. Sure, I was making all manner of grave mistakes. But I made the conscious decision to just grin and press on, trying my best not to let it bother me.

Suddenly the whole world became my teacher, as people gently corrected me, explained things to me, or showed me how to properly phrase Spanish expressions. With each conversation, I seemed to pick up a new word or two and was surprised to often find them still there, days later. Sure, I was still making loads of mistakes but the words were finally sticking in my mind.

So jump in, I say. Get out there and start speaking, even if you only know how to say hola—and don’t yet realize that the “h” is silent. Most people will be patient and appreciative of any effort you make to speak their language and you’ll soon realize that the mistakes really don’t matter.