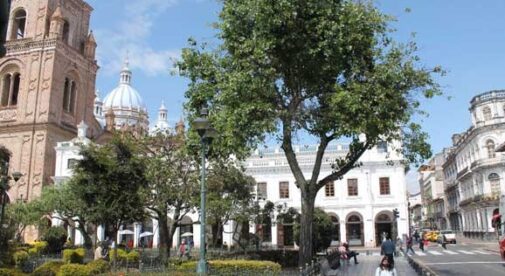 It’s typical of me that I’d end up on the wrong side of security while trying to break out of a museum.

I had the perfect place in Cuenca to interview expats. The only problem was getting away from it. While I loved the grassy lawns and wooden boardwalks of the Remigió Crespo museum café, leaving it meant descending to the Tomebamba River walk, heading upriver for a block, and then ascending a lengthy set of steps to the street above. It was a bit of a hike.

There is an alternative; you can make your way through the museum itself and use it as a shortcut back into the hubbub of Cuenca city. I’m a big fan of these urban shortcuts. You probably have your own favorite, perhaps one of those multilevel affairs where you walk through one entrance of a department store, take the escalator to kitchenware, come out at another exit, and stroll into an entirely different part of the city. Very satisfying.

I had hoped for something similar from the Crespo museum in Ecuador. Technically speaking, it’s a simple two-floor ascent to move from the café to the street outside. Unfortunately, I hadn’t counted on the female concierge who guards the front entrance (or in my case, it would have been the front exit).

I nearly made it through on my first attempt, but my gatekeeper clearly felt I was in need of cultural immersion. She encouraged me in no uncertain terms to sign the guest book and follow the floor arrows around the three-story exhibit.

I ended up slogging my way around three floors of potsherds, lace collars, and newspaper articles in glass-case exhibits rather than admit that I was only there because I wanted a shortcut from the café to the street. If you ever visit, my advice is to take the outdoor steps instead.

Downtown Cuenca is a warren of exceptionally well-preserved Spanish colonial buildings, parks, cobblestone streets, and river walks. The city itself has an atmosphere of genteel content. There’s no hustle here, no sense of hurry. On the larger streets, that atmosphere of quiet, considered urban living is complemented by the near-silent progress of the new trams which connect the city suburbs to the historic center.

The visual contrast is strangely pleasing. In smoked glass and scarlet, the trams roll along like props from a Ridley Scott movie, overlooked by cast iron balconies as intricate as a Flamenco dancer’s lace mantilla. These artfully bowed railings adorn the windows of 18th-century, Spanish-style row houses. The carved wooden eaves and scrollwork details on the facades are more lovingly maintained than anything I’ve ever seen in Spain itself.

It’s always worth looking upward in Cuenca’s old town area—the range of architectural styles on display can stop you in your tracks. At eye level, like in any city, window displays and restaurant menus dominate the gaze. Above that, though, the periods of prosperity enjoyed in the city’s history are reflected in the expensive detailing of its buildings. You can trace the centuries from the old cathedral on Parque Calderón (16th century), outward to the early 20th-century townhouses alongside the Tomebamba River.

I lived in Spain for 13 years, and that experience made a stroll around Cuenca both exhilarating and confusing. Confusing because, in the space of a few blocks, it could feel like walking from a section of Bilbao’s financial district to a church plaza in Segovia, by way of Alicante.

In Spain, those cities had their heyday of prosperity in different centuries. In each of them, the style of their old town reflects the period when the city was at its prime. In Cuenca, it’s more of a mosaic. While Cuenca looks like a Spanish city… I can think of no city in Spain that looks quite like it. It’s joyous.

Whatever we may think of Spain’s colonial expansion, there’s no denying the uplifting beauty of its architectural legacy. Cuenca is a city created with confidence, with wholehearted belief in an unending supply of vast riches, and an exultation that is rarely found in the Old World. For parallels, think in terms of 1920s New York, or 1960s Las Vegas—the style of building is different, but historical Cuenca’s budget-blowing largesse comes from the same unfettered confidence. I defy anyone to look upon the three powder-blue domes of Cuenca’s Catedral de la Immaculada Concepción and resist smiling at the barefaced audacity of it all. Simply put, Cuenca makes you smile.

Anyway, enough architecture and historic prattling. Even if you take no interest in such things, Cuenca is a visually rewarding city where the ground floor space of grand mansions and townhouses is now the home of chic boutiques and luthiers’ workshops, side by side with more down-to-earth businesses like launderettes, diners, and the kind of mom-and-pop hardware stores you thought had become extinct decades ago.

The influence of the Tranvia tram system on Cuenca has been notable. For example, 10 years ago, the district to the west of the city known as Gringolandia (if you’re looking for it on a map, its official name is Ordóñez Lasso) was the primary residential area for a large number of Cuenca expats.

It’s still popular, and it has a lot going for it. Condos are relatively new there, the district has fine mountain views, and it’s quite close to a number of amenities such as hospitals, restaurants, parks, and playgrounds. Gringolandia was once the go-to option for new expats. Now, though, the Tranvia has opened up new city suburbs which had previously been too remote for expats without cars.

Because of regular trams running at convenient times, areas such as Vicicata are becoming more viable as places to live. And while Vicicata is still a little undeveloped, you can easily see its potential. One of Cuenca’s five rivers flows right through the area, with green parkland on either side and outdoor exercise areas. Right now, it’s still dominated by car dealerships and vacant lots, but you can see that it’s an area on an upward trajectory.

Closer to the historic center of Cuenca, suburbs like Puerta del Sol cater to those seeking family houses; the Tres Puentes neighborhood offers low-rise living alongside forested parks, restaurants, and cozy cafés; while the Puertas del Sol district provides more of the same, except leafier.

I spoke to Aaron Strickland and his wife, Alla, on a weekday morning when their 29-month-old daughter, Amelie, was in daycare. She goes between 9 a.m. and 12:30 each day, for which her parents pay just $160 per month. They’re delighted with the care she gets there.

The Stricklands sold their home and cars in Austin, Texas, late in 2020. They filled a container with everything they couldn’t leave behind, and shipped it directly to Cuenca. Aaron had held an IT role in the military, while Alla worked as an energy consultant. “We were dropping Amelie into daycare at 6 a.m. and picking her up again at 6 p.m. None of us liked that life,” Aaron explains.

“It all came together when I took Alla on a birthday vacation to Quito,” he continues. “I found us a really good deal on the Scott’s Cheap Flights site, and we both fell in love with Quito. Especially the climate. The next leave I got, I came down to check Ecuador out—all of Ecuador this time. Cuenca just won out. If this is the place for you, it’s really the place for you. The weather is excellent—not too hot, not too cold. The city is beautiful, and, because neither of us speaks Spanish yet, it really helps that there’s such a big expat community here.”

The Stricklands live in a 3,750-square-foot apartment in a four-story building in the El Vergel district, about a mile from the old town. They get a lot for their money—three terraces, three bedrooms, a separate playroom for Amelie, their own parking spot—all for $600 a month. When they first arrived, Aaron and Alla figured it needed a little work, so they made arrangements with the landlord to get the bathroom and kitchen remodeled and modernized. They paid $2,000 toward the work, their landlord paid $5,000, and all parties came out happy with the result.

It’s that sort of easy, unobstructive attitude that the Stricklands find refreshing in Cuenca. “People seem happy to help, and everything’s so affordable,” Aaron points out. He describes an occasion when Amelie became ill, with a temperature of 104 F.

They took her to the Mount Sinai hospital branch less than a mile from their home, where the ER doctor on duty called a pediatrician in to check her over. Consultations, tests, and medications worked out at just over $130, and they left with the pediatrician’s cellphone number.

As it happened, at 10 p.m. that night Aaron had a question about what dosage to give.“The consultant answered right away,” he says, still slightly amazed by the level of care shown.

“We have a regular pediatrician now,” Aaron points out. “He’s really great, and charges $40 per consultation. It’s not just Amelie’s care either; Alla gets orthopedic treatments from her specialist for $35.” All of this came recommended on various Facebook expat groups. “They’re a really useful resource,” Aaron says.

We wind up our chat in time for Aaron and Alla to pick Amelie up from daycare, just as the temperature warms to its daytime high of around 75 F. The check arrives, and is typically modest. It inspires Aaron to one last expression of why they love their life in Cuenca so much: “We often go out for lunch for one of the almuerzo set meals. Those cost only a couple dollars each, but the servers always bring a small plate of food for Amelie, unasked. Sometimes they bring her a drink, too. They never charge. It’s very sweet.”

It’s details like that which make or break the expat experience. Perfect weather and affordable living will only take you so far if you feel unwelcome in a country or— just as bad—if you feel you’re looked upon as a walking pocketbook to be squeezed for every cent. No expat I spoke to in Ecuador reported either of those two scenarios. On my own travels through the country in 2019 and 202o, I can say in all honesty that I never felt ripped off there either.

I say my farewells to Aaron and Alla, and wish them well in their new home. When they’ve gone, I leave too. This time, by the outdoor route.

5 Reasons To Move to Cuenca… And 2 Not To