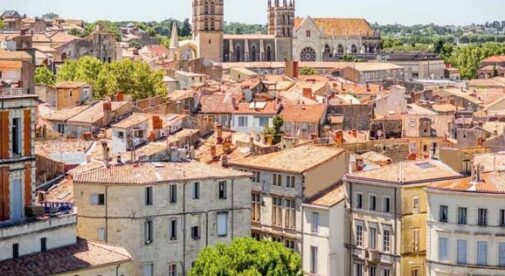 Montpellier is France's fastest-growing city and right next to the Mediterranean.

Due to the pandemic it’s been a couple of years since anyone has talked about “over tourism.” But not long ago, it was a huge concern in major European cities.’ In places like Venice, Barcelona, and Paris, hordes of tourists were crowding the streets and driving up real estate prices and rental rates.

Now, post-pandemic, as travel takes off again, over tourism is once again rearing its head.

But as it maxes out Europe’s main destinations, there are many incredible cities that can offer an alternative for Northern Europeans and North Americans weary of the crowds and seeking something more authentic.

I call these “second cities.” They’re not the first port of call for first time visitors, but they are destinations that can offer just as much to see and do, without the crowds, and also a lot cheaper than most first-tier cities.

Montpellier in southern France is among the most attractive and exciting second cities I have ever visited.

It gets 300 days of sunshine a year and offers the strolling visitor a mostly pedestrian old town of winding lanes amid Renaissance-era mansions.

Its French nickname is the “surdouée” (the gifted one), and its well deserving of it. You’ll find avant garde architecture, art galleries, museums, superb nightlife and dining, the city even has its own arc de triomphe.

Then there’s the beach. It takes just 20 minutes or so on public transport to leave the compact city center and have your toes in the sand looking over the Mediterranean.

It’s also one of France’s fastest-growing cities, if not the fastest. In the early 1960’s Montpellier had a population of around 119,000. Today it’s closer to 300,000. It’s also a huge center of third-level education. And given it’s home to the oldest operating medical school in the world it’s probably not surprising that bio-tech is big in Montpellier.

The city’s airport has been adding new routes and a new high-speed TGV train station means you can get to Paris in three-and-a-half hours.

The last time I visited Montpellier was three years ago and I was very impressed by what I found.

Also by what I didn’t find…

The one thing that was noticeably lacking was big numbers of tourists. The city was still something of a secret for foreign visitors to France. And it seemed ripe for an injection of tourism, especially in that 2019 period when over-tourism was overtaking cities like Venice, Barcelona and Paris.

The play I identified was simple: find an unloved old building or apartment in need of some work and tap into an already growing demand for short-term rentals.

I found condos like this in random locations…above a shop or restaurant…in a small building tucked down a side street of only three or four units. They were overlooked…and perfect Airbnb rentals for a couple on a city break.

At the time, I wrote that I expected tourism to boom here within five years. Three years—and one pandemic later—my scout Paul O’Sullivan visited the city for an update.

Here’s a taste of what he found.

Montpellier is a city made for an easy-going lifestyle. Its medieval centre is a maze made for wandering. It boasts 16 leafy squares, and during my spring visit they are all green and abuzz with café life. Indeed, even the trams here glide along at an easy pace.

The first thing I noticed was the youth. At 34 years I don’t consider myself old, but in Montpellier I felt definitively middle-aged. This is one of the youngest cities I’ve ever visited. Indeed, 50% of the population under 34 years old according to the National Institute for Statistics. There is a huge student population, with about 70,000 students in a city of just under 300,000 people.

There’s also a significant tech scene. The city rightfully regards itself as the Silicon Valley of France’s southern coast and a number of big hitters are based here—IT giants such as IBM, Capgemini, Ubisoft, Sanofi and Dell, as well as a thriving entrepreneurial ecosystem.

In the Languedoc this is important. Montpellier sits in contrast to much of the rest of the region, traditionally considered one of the poorest in France. There’s certainly money here, and it’s seen as its most glaring in the neighborhood of Port Marianne, a modern zone on the eastern side of the River Lez.

Port Marianne is filled with contemporary architecture and modern entertainment venues like the Marché Du Lez. Green and spacious, and about 20 minutes from the historic center, the residents here are predominantly young families and moneyed young professionals.

While Paul was in Montpellier, on the Atlantic coast, Declan Aylward (our Daily Postcards editor) toured Bordeaux as a potential second-city prospect…

Bordeaux is a thriving, vibrant city with all the hustle and bustle of a major tourist destination. And yet, unlike its big sister city Paris, Bordeaux retains an accessible feel. I found the center walkable, the crowds manageable, and the locals friendly (and more patient with my broken French than Parisians).

In fact, with its grand boulevards, chic bistros, and designer stores, Bordeaux feels like a pocket-sized Paris. Everything you get in Paris but on a smaller, friendlier scale.

Plus, the wine is of course fantastic. Bordeaux is famous for producing excellent wines, and I can tell you from experience that its reputation is well earned.

The neighborhood of Saint Michel, just south of Bordeaux’s historic center, looks to be undergoing a process of gentrification. Walking the streets, I saw crowds of young hipsters with dyed hair and piercings lounging at craft beer bars, young professional types with laptops working with a coffee beside them at Starbucks, and Turkish markets selling fruit and veg to old ladies in shawls.

The area used to be considered a bit dangerous and dirty by locals but, since 2007, there has been a slow process of restoration that began with the neighborhood’s UNESCO listed buildings. This put Saint Michel on the tourist maps and started to bring some money into the area.

The craft beer bars and trendy restaurants followed, shouldering in beside dive bars and hookah lounges.

The process is by no means complete, though, and to my eyes there are still plenty of rough edges that gentrification hasn’t smoothed off yet.

It’s also super central, right by the Saint Jean train station, from which you can reach Paris on the LGV high-speed train in just over two hours.

It’s the kind of up-and-coming place that I would expect to become more popular, and more expensive, as time goes on.

Chartrons, northeast along the river and about a 20-minute walk from the center of Bordeaux, has the look of a place where I expect Saint Michel to be in a decade.

Formerly a rough part of the city, it’s now fully gentrified and trendy.

I found the streets cleaner than Saint Michel, the people a little older and a little more monied.

As I explored, I saw traditional French bistros, artisanal boulangeries and antique stores sharing space with organic food stores, poke bowl restaurants, and funky bars. There were a few tourists, but many more locals walking dogs and families enjoying lunch on sunny terraces.

For a pure lifestyle play in Bordeaux, this is where I would want to buy.