As France’s fifth largest city in terms of population, and the second largest city in the fabled Provence-Alpes-Cote d’Azur region (Marseille takes the top spot), Nice has long been considered one of the most attractive cities to live in the country. On the edge of the Italian border, a mere 18 miles away, and facing the deep blues of the Mediterranean Sea, the living is easy and the weather is near perfect.

It’s hard to imagine a more beautiful setting then this sparkling gem nestled between the mountains and the sea.

The iconic pedestrian walkway, La Promenade des Anglais, runs about four and a half miles along the coast and passes some of Nice’s most majestic buildings to the north (Hotel Negresco, Le Royal Hotel, and the Massena Museum) and large swaths of prime sunbathing territory to the south. Beachside restaurants, bars, and cafés line the elegant boulevard, with the pedestrian zone laying claim to a daily parade of walkers, joggers, and cyclists. Blue and white umbrellas add a chic, French touch to the pebbly beaches of Beau Rivage, Castel, and Opéra (just a few of the numerous public and private beaches along La Promenade).

Long home to a loyal set of international tourists, Nice also has a dynamic expat community—with strong Italian, North African, and even English influences. More and more Americans have also moved to the area, enamored with the idea of retiring along the French Riviera. With a host of outdoor activities, an arts scene second only to Paris in size, and one of the most attractive climates in all of France, it’s easy to see why.

A haven for travel lovers, the city is exceptionally well connected. The Nice international airport lies on the far end of La Promenade des Anglais, whisking residents to Paris (in about one hour), or other continental destinations, on a daily basis. Direct ferries leave for Corsica and Sardinia, and the city has its own modern tramway and bus system. Antibes, Cannes, and other enticing beach cities can be explored by train from Nice’s central station, which also includes routes to European cities like Milan, Venice, and Vienna. 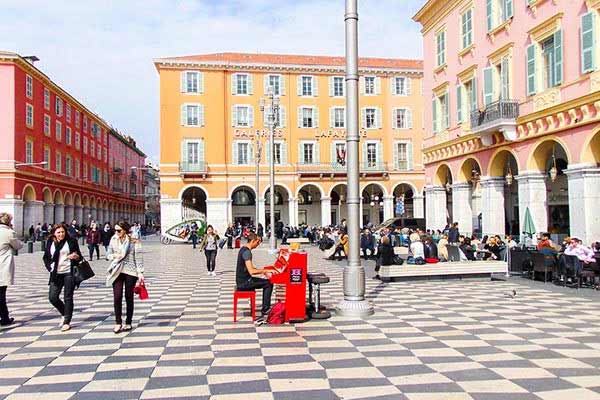 Living in a larger, cosmopolitan city in the south of France brings a host of advantages. First off, Nice is a particularly beautiful destination. With eye-catching baroque facades and Belle Époque “hotels” transformed into luxury apartments, the city is an architectural wonderland.  Whether you’re wandering the colorful, auburn-hued alleyways of rustic Vieux Nice (Old Nice), or admiring the ochre-red Italian-style buildings surrounding stately Place Massena—the city’s main public square—there’s always something to draw your attention.

It’s also a very accessible city. The walk from Place Massena to La Promenade des Anglais can be made in around five minutes, with the vibrant farmers market on Cours Saleya just around the corner. A sort of scaled-down version of Paris, but with decidedly sunnier weather, retirees will enjoy the ability to wander easily from neighborhood to neighborhood, becoming connected to the daily rhythms of French life.

Much like Paris, each neighborhood has its own set of restaurants, cafés, and boutiques. Nice is well recognized for its culinary contributions, and retirees can enjoy some of the finest restaurants in all of France. Local specialties like stuffed zucchini flowers and street foods like socca (a chickpea flour flatbread) are as appreciated as Michelin-star level cuisine. The culinary scene is lively, tied to the rich traditions of the Mediterranean, and enjoys a lot of carry-over from nearby Italy.

Lastly, due to international tourism and a sizeable expat population, English is more widely spoken in Nice than other cities in southern France. Retirees can expect a fairly smooth transition to France, with numerous clubs, like The American Club of the Riviera, providing assistance and support to new residents. A complete list of expat associations is available on the Angloinfo Riviera Directory. 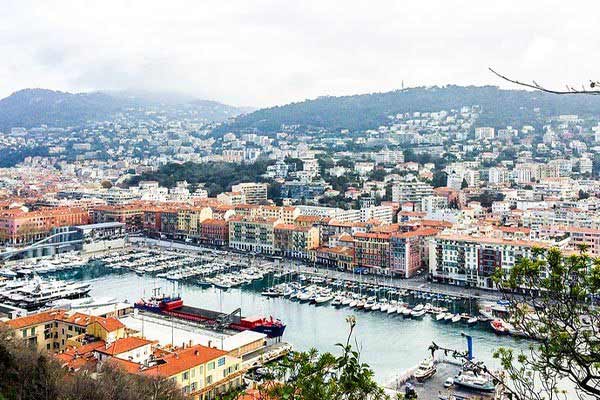 Nice is, above all, an exuberant city full of diverse and interesting activities. There’s always something going on, and future residents can expect a full social calendar of events. The city’s ample squares and boardwalk-style beachfront make excellent locations for annual festivals and concerts. Under the glow of the Mediterranean sun, there’s something for every taste and budget.

The world-famous Nice Carnaval takes place over two weeks in February and March and includes a spectacular display of creative artistry in the larger-than-life floral parades on La Promenade des Anglais. Music lovers will enjoy attending the Nice Jazz festival on Place Massena in July and fans of the art world will appreciate the annual Night at the Museums event. Nice has the second largest concentration of museums and galleries in all of France, after Paris.

Beyond the clubs, associations, and cultural activities, one of the main draws of moving to Nice is the laidback rhythms of the Mediterranean lifestyle. Think early-morning walks along the sea, long lunches capped with chilled glasses of rosé, and evenings catching the sunset from the spectacular view atop the hillside of the Château de Nice.

Cost of Living in Nice, France 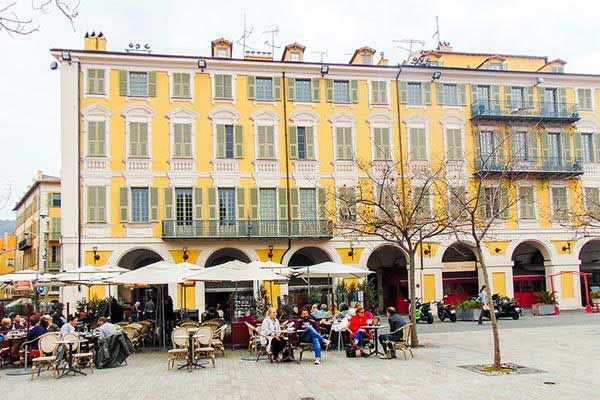 As a sought-after location, Nice has a higher-than-average concentration of retirees. Although that means access to quality services and healthcare, life in this French Riviera haven is significantly more expensive than other retirement destinations in France. While you can find budget options for dining out, transportation, and even health services, the real financial costs come from housing.

A two-bedroom, one-bathroom apartment (700 square feet) in the city center starts at around $342,900. Prices drop outside of the historic center of town, and some retirees may look to surrounding beach towns for better value. Renting may provide the best budget-friendly option. The same size (700 square feet) two-bedroom, one-bathroom, furnished apartment rents for €1,100 (around $1,300) a month.