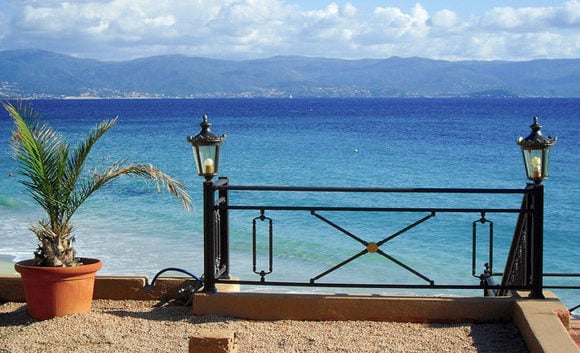 Best of France and Italy in One Enchanting Island

Fresh air, fish stew, red wine. I’ll sleep. Tonight’s lullaby is the murmur of waves and the tinkle of masts in Macinaggio’s harbor.

Cap Corse is Corsica’s northern promontory. Maps show it as a finger gesturing rudely to the mainland. Maybe that’s appropriate given the island’s history of conquest. French in name and rule, Corsica’s soul and traditions remind me more of Sardinia, its Italian island neighbor.

No large scale resorts, no over-development. Instead, its 600 miles of coastline are necklaced with silver beaches, crescent moon coves, stone towers and tiny fishing villages.

The interior is wild—a hiker’s idyll of shepherd tracks, sparkly rivers and granite mountains contorted into needles and spires. Below the crags are orchards, vineyards and stone villages half as old as time.

Goats spill across spaghetti-thin roads, red kites hover overhead, wild boar rummage in forests of oak, pine and sweet chestnut. Everywhere is perfumed with the scent of the maquis—Corsica’s dense shrubland of myrtle, rosemary, eucalyptus and numerous other herbs and flowers.

France, yes—games of boules are definitely French. So are croissants, pastis, and the tricolor flying above town halls.

But there’s also pasta and pizza from wood-fired ovens. Churches often have campanile bell towers straight off a Tuscan postcard. While vineyards flank the Route des Vins, the Balagne’s crafts trail is signposted as an Italian-sounding Strada di Artigiani.

Five centuries of Genoese rule helps explain the culture collision. Genoa only sold it to the French in 1768. Corsicans weave France and Italy together, but with a distinct warp and weft to the fabric.

Corsica’s own flag, a sinister-looking Moor’s Head, adorns car number-plates—my rented Citroen included. Its language combines French with old Genoese. And the past is studded with everything from prehistoric megaliths to pirate kidnappings, village witchcraft and bloody vendettas.

Although it’s not a bargain hotspot, prices are still less than on the Riviera. So, €165,000 ($185,002) for a 645-square-foot apartment in Ajaccio’s historic castle quarter isn’t considered expensive by local standards. After all, Ajaccio is Corsica’s capital as well as Napoleon Bonaparte’s birthplace.

Teetering above the north-west coast, the villages of  the Balagne region in Corsica, France, have a grandstand view of white yachts, silver sands and luminous blue sea. I spent one day of my October trip driving between these settlements.

Red kites wheel above—this is bird of prey territory. Beyond forests of holm oak, chestnut and pine, the land rises into a shadowland of granite crags and pinnacles.

It’s a landscape made for stories. Legend says Christopher Columbus’s mother was born in Monticello’s ruined castle. Corbara has tales of Moorish pirates who kidnapped villagers to sell in North Africa’s slave markets.

Santa Reparata is a great coffee stop—the bar opposite the church has a spectacular lookout down on Ile Rousse from its back garden.

I stopped for a picnic lunch in Pigna—a hilltop village with blue-shuttered stone houses, cobbled streets and cats with a taste for Camembert. This is the nerve-center of the Balagne crafts trail: potters and artisans who make shepherds’ knives, stained glass works, music boxes and a special type of lute called the cetera.

Calenzana is another fascinating stop. Its inhabitants saw off German mercenaries by bombarding them with bee-hives. It’s also the start of the GR20, a hiking route across Corsica’s mountainous spine. My idea of a walk wasn’t so ambitious. I aimed to visit St. Restitude’s sarcophagus, but the gate to her chapel was locked.

One of Corsica’s female martyrs, St. Restitude suffered more ignominies than most. Apparently she was whipped with a pizzle (a bull’s penis), had her skin gouged with iron combs, was stoned, and then thrown into a fiery furnace. She survived both those torments and an attempted drowning, but not decapitation.

Most Balagne villages are within 15 miles of the coast. But the terrain and too many walkabouts meant I never saw even half of them. There are many more beside the ones I’ve mentioned.

Every turn of the ribbon-thin roads delivers another reason to stop. Here, the dazzling white rotunda of a tiny chapel. There, a farm selling honey and sheep’s cheese. Around the bend, a prehistoric standing stone…a roadside shrine…another ruined castle…an awesome coastal view.

Plus it’s a forager’s delight. Olive trees and even apricot trees grow wild beside the road. Like the hundreds of sweet chestnuts in spiky casings, mushrooms were everywhere. I’m sure I spotted some pale yellow (and expensive) chanterelles, but it’s wise to have a good fungi identification book before picking anything.

The Balagne’s only sizable settlements are on the coast: the citadel town of Calvi and Ile Rousse. The French Foreign Legion has a training base in Calvi, so don’t be surprised to see soldiers in white kepi caps.

Ile Rousse isn’t an island, but a pretty seaside town. It takes its name from red rocks jutting into the sea. People were sunbathing on its beach, and even venturing into the sea in late October.

One-bedroom apartments (35 square meters) in Ile Rousse can be found for around €120,000 ($134,547). That’s around €1,000 per square meter less than French Riviera prices. Same weather, but Corsica is wilder, prettier and completely unspoiled.